The National Sailing Hall of Fame based in Annapolis held their third annual Classic Wooden Boat Rendezvous and Pursuit Race last weekend. I have been blissfully unaware of such event until my friend Tom Price called up and said he and Doug Lupe were going to enter Doug's Classic International 14 (Stradivarius, a McCutcheon built Kirby IV, designed and built in the 1960's - all boats in this race have to be designed before 1970 - and, obviously, built in wood). Tom was inquiring about what I thought would be a good handicap number for the Classic 14 and we agreed it should be around the number for a Thistle (a Classic 14 is slower than the the Thistle in the light stuff, faster in medium and heavy, but slower than a 470 in a real breeze). My curiosity was piqued and Sunday morning I wandered down to the City docks to look some of the boats over and then hoof it over to the Naval Academy where the pursuit race start line was laid off Trident Point. A pursuit race has the slowest boats start first, the fast boats start last, everybody has their start at preset times with the idea that all boats should get to the finish line at the same time. The winner over the line is the winner over the line. I had a lunch date so I was only able to watch the two slowest entries start but I was able to  get some photos of the centerboard boats that were racing.

The Acorn dinghy, a 10'2" lapstrake lug rigged catboat designed by Ian Oughtred was the first to start and had over a 30 minute head start over the second starter (I could barely see her when the second boat started). 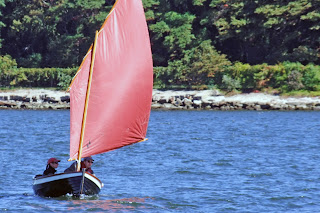 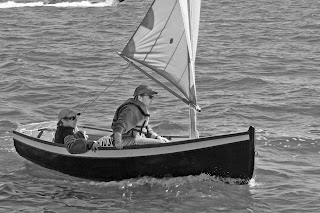 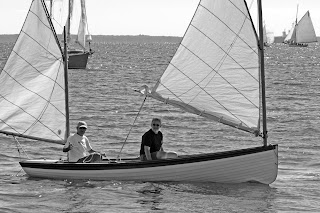 Bob Pulsch from New Jersey did a beautiful job building a 1900 B. B. Crowninshield centerboarder design, Rebecca P. Based on the Seawanahaka Rule, the day sailor looked to be between 24'  to 28', beamy enough to stand up to an enormous gaff-rigged main, had 700 lbs of lead in the centerboard and about 2600 lbs. of displacement. According to Bob, five were built in Boston at the turn into the twentieth century. For this race, Bob added both a jib and a spinnaker to really up the ante on an already massive sail plan. 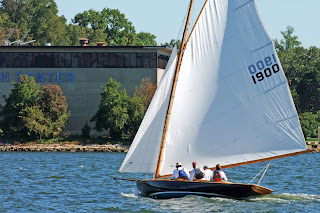 The oldest American racing class, the two Sandbaggers, Bull and Bear, reproductions on an 1869 design competed. One of them actually flew a spinnaker on the downwind legs. Earwigoagin has covered sailing on these unique sailing craft. 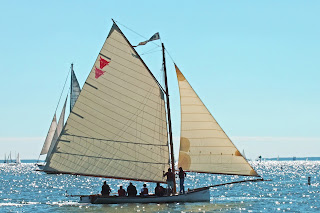 One of the keelboats in the cruising class was the very pretty Herreshoff Buzzards Bay 25. 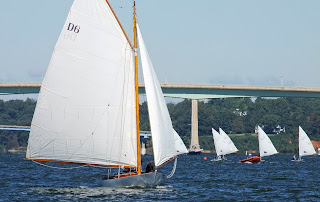 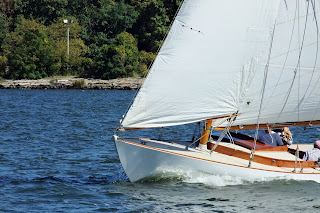 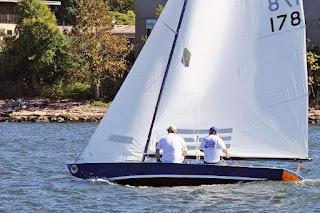 Tom and Doug in the beautifully all varnished, cold-molded Classic 14 with an early 1980's rig (full batten main - I was puzzling over who made the sails until Tom reminded me - senior moment) won the Dayboat category but the handicaps seemed about right as Tom just squeaked in front, having some anxious moments from the Sandbagger while sitting in a windless hole. 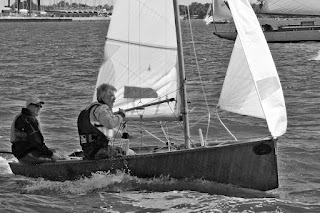 Posted by Tweezerman at 3:16 PM 3 comments