I've bracketed the 1890's in several posts tracing the history of the development of the racing scow. In 1890, at the beginning of the decade, Thomas Clapham introduced the first racing scow, Bouncer. At the end of the 1890's, Thomas Day and The Rudder magazine introduced the scow to the workingman sailor, with the publication of easy-build scow plans; first the 16' Lark cat-rigged scow designed by C.G. Davis in 1898 and, shortly after, the Swallow, a 24' main and jib scow designed by C.M. Mower and Larry Huntington. In 1895, in the middle of this decade, the first International Seawanhaka Cup commenced competition and over the next ten years, in this yearly pressure cooker of constant design development to win the cup, this odd-ball type, this "barn door" of a boat, dominated the racing and forever carved out a niche in the yachting scene that flourishes up to the present day.

In 1895, Larry Huntington, a twenty eight year old boatbuilder out of New Rochelle, New York, would enter his simple, crude-looking scow Question, in the trials for the U.S. contender to race Britain in the first competition for the Seawanhaka Cup . Although Huntington didn't win (W.P. Stephens in his conventional centerboard design Ethelwynn would win the trials and then successfully defeat Englishman William Brand racing another heavier, conventional centerboarder, Spruce IV to secure the first Cup win for the U.S.), Huntington demonstrated, during the 1895 season and during the Seawanhaka trials, that the scow was dominant in any breeze. Huntington re-emphasized what Thomas Clapham had proved five years earlier with his Bouncer, the scow was an ingenious rule-beater racing under a Seawanhaka Rule that penalized waterline length.

In a controversial move, Larry Huntington, with his brother Lev steering, shadow raced Question against Ethelwynn and Spruce IV in race four of the Seawanhaka Cup. There was a good breeze and Question handily out-distanced both of the actual competitors in the cup. W.P Stephens, with some justification, later complained about this stunt in Forest and Stream but the die had been cast. Observers at the Seawanhaka Cup, including the Royal St. Lawrence Y.C., took note and the next year all the top contenders had scow types including U.S designer Clinton Crane and the  Canadian design, engineering, and sailing genius, Herrick Duggan. Herrick Duggan, representing the Montreal club, Royal St. Lawrence Y.C., would come to dominate the cup competition in his scow designs over the next six years.

Larry Huntington would continue to design a series of well regarded scows for the Seawanahaka Cup competition both for him and his brother, and for other customers, though none of his designs were able to win the trials to represent the U.S. in the Cup competition.

Not surprisingly, in today's yachting history, Larry Huntington is best known, not for his scows, but for designing and building the offshore keelboat, Tamerlane, to win the first Bermuda race in 1906 (he designed and built two out of the three original competitors in 1906, the other Huntington design being Gauntlet).

A photo of Larry Huntington from Yachting magazine. 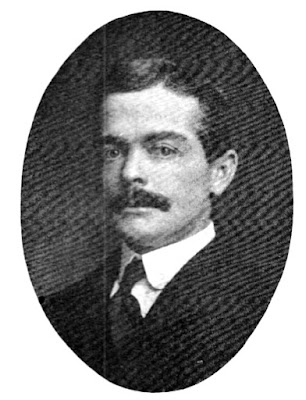 The half-rater Question as sketched by C.G. Davis. By 1905 Question had been converted to a motorboat with a boxy cabin-top (top right of sketch). 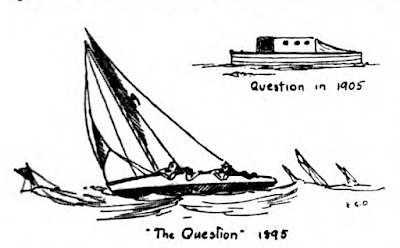 Larry Huntington estimated his cost for getting the simple chined Question built and in the water at $245 (he charged his labor at normal shipwright wages). The Rudder magazine figured this was 1/6 the cost of the other Cup racers. 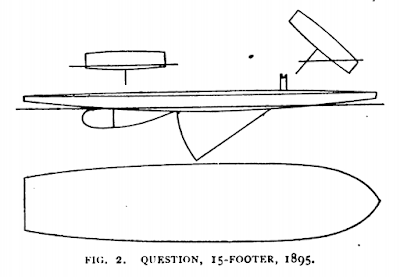 Paprika was Larry Huntington's refined scow design as a follow-on from Question. Built for the 1896 Seawanhaka Cup trials, the hull was round-bilged 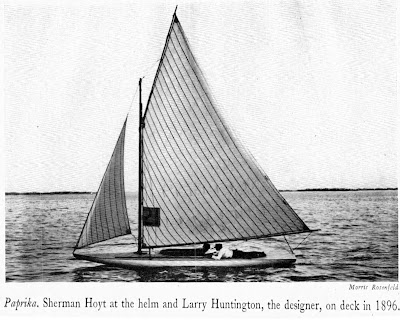 Below are the lines to the mysterious American scow, Maika Maili, that was imported into New Zealand in the mid 1890's and formed the basis for the New Zealand famous Patiki class. There is a very strong resemblance to Huntington's Paprika design but, at the present time, I can find no confirmation that Huntington exported one of his scows to New Zealand 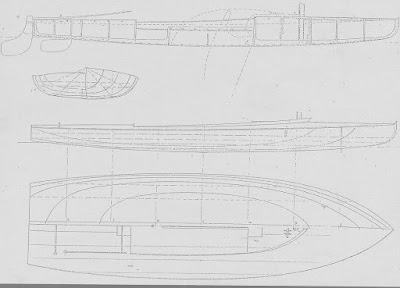 Posted by Tweezerman at 7:50 AM 7 comments

Earwigoagin covered the beginning stages of Peter Gilbert's building of the Lark scow and now Peter sends along photos of wrapping up the build, the fitting out, and first sail of Pinky Too.

From this perspective, the photo of the curvaceous deck with white primer looks like a spaceship ready to beam up into the light field. 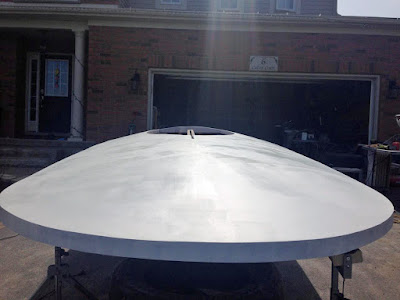 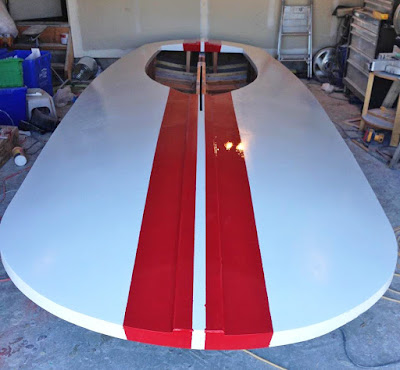 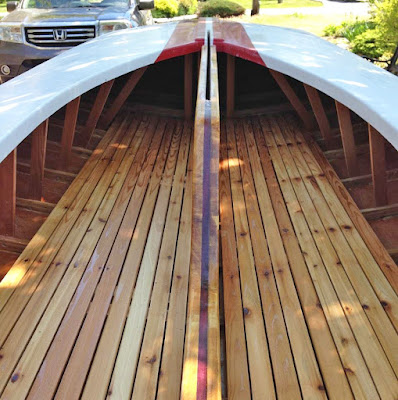 Nearly the whole Erieau Lark fleet showed up to get over the final hump of fitting out. Beer included. 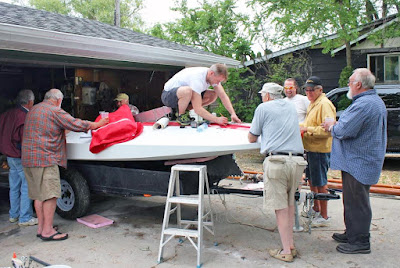 Been there, done that! The blind search for the socket while you hold the nut and washer on underdeck bolt. 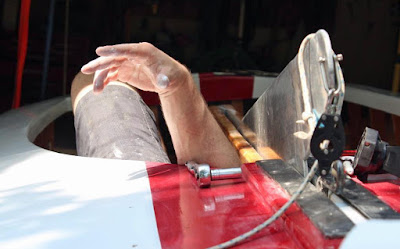 Sail up. Fittings still piled about the bow. The classic looking sail was made by The Sail Loft Marine Store in Barrie Ontario. 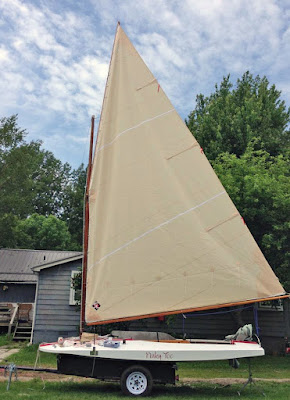 Given the smile on the face, looks like everything is holding together on the first sail of Pinky Too 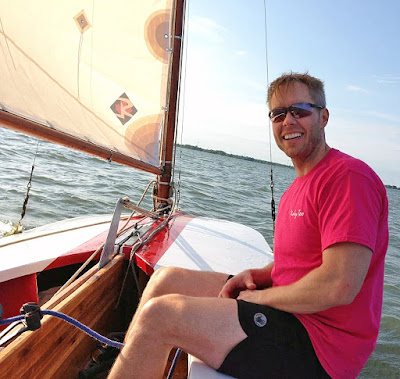 First race is this weekend, but now, time for the brother build team, Peter and Scott, to enjoy a glass of bubbly and celebrate a job well done. (One of the features of the scow, at least the larger ones, is that one or more can stand comfortably on the bow.) 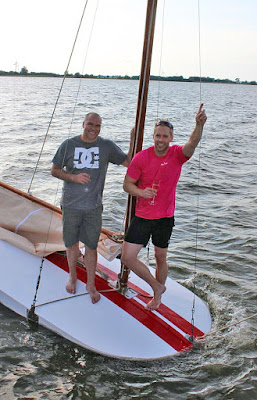 Posted by Tweezerman at 6:04 AM 2 comments

Header Photo: Rigging on the yard of Brigantine Y.C.

The previous header photo was the young one of Team Albaugh, Erik, rigging his Savannah Mistral Classic Moth in the yard of Brigantine Y.C. (his then girlfriend, now fiance is helpfully pitching in).

This year, 2015, marked the 24th running of the Brigantine Classic Moth Regatta, an event singlehandedly organized by the Albaughs (with a dynamite pre-race party hosted by the Courters). Thirteen Classics raced and it marked my first day on the water this year. Good thing the winds were lightish as I felt a complete klutz in my Moth, which is to be expected. A good time. Mike Parsons of Cooper River ran away and hid from the fleet in all races to take the overall results.

I had some time to take a couple of yard shots before shoving off for the racing.

Team Albaugh was in fluorescent green for the regatta. 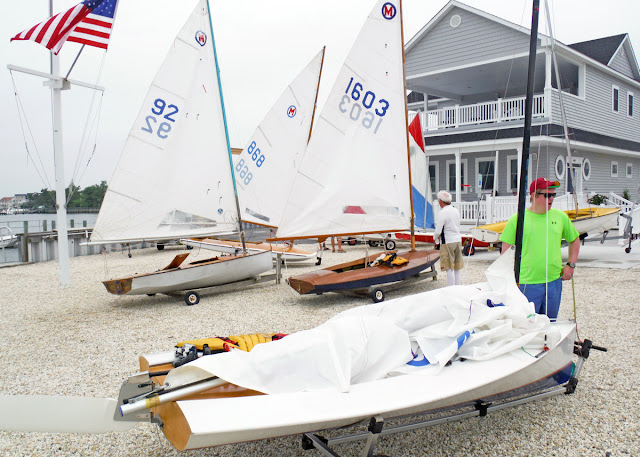 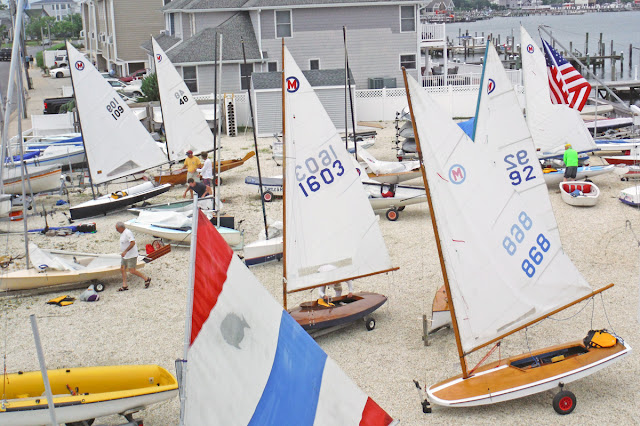 Looming on the horizon are the famous casino towers of Atlantic City. 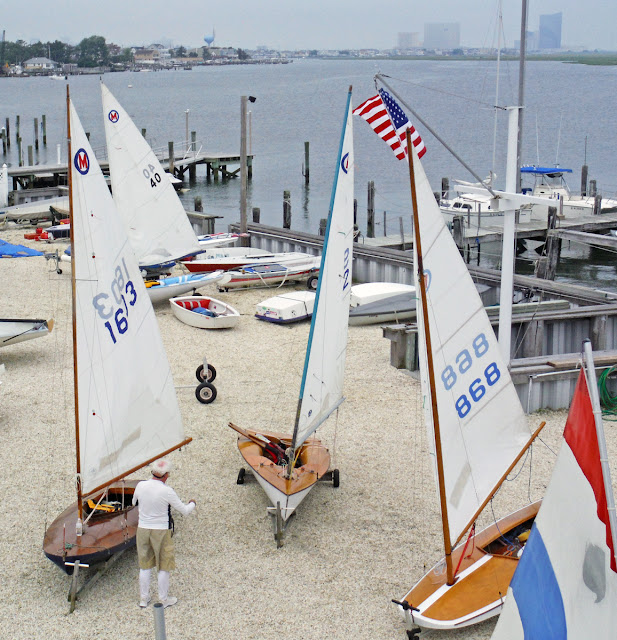 My trusty Maser has been going through a bout of repairs over the last year (hence the white primer). I have been accused several times of taking a nice looking sailing dinghy and making it uglier, year by year. I resemble that remark! (a somewhat funny American switcheroo on the comment, "I resent that remark!") 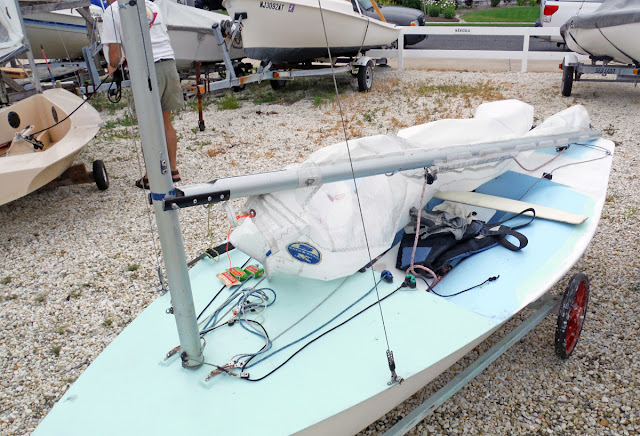 Posted by Tweezerman at 6:41 AM 0 comments

A Catamaran Flying a Hull - Ho Hum - Not Really

At first glance, the following video of a catamaran flying a hull, with the crew stacked on wings, looks ordinary enough. Then you realize the wind is maybe two knots max! And then you realize the upwind headsail covers the span of the whole cat, from the bowsprit to the back corner of the transom! That's one way to get a ton of light air horsepower and jack up the VMG

This is one of the Swiss Lake classes, the M2 catamaran class which is the smaller cat class (there is the large M1 class).

Posted by Tweezerman at 3:19 AM 2 comments

Nostalgia. In college I didn't have a LP player but I did own a couple of LP's. Santana's "Soul Sacrifice" was at the top of my play list, the album rapidly overplayed into pops and hisses (Jethro Tull and It's a Beautiful Day LP's close behind). Here is the title song from Santana's album as performed at Tanglewood in 1970. Excuse me now while I get up and dance away (well at least the old fart bob up and down).

Posted by Tweezerman at 5:04 PM 1 comments

A Big Boy Up and Hammering

Every once in a while I get a hankering to pull out a video of one of those wide-body French offshore speed machines. This is the French PRB, one of those IMOCA 60's.


A video of the small tykes, the Mini-Transat 6.5's planing can be seen here.

Posted by Tweezerman at 4:48 PM 0 comments

"In the name of uncomfortable fun!"

R2AK, the Race to Alaska, a 750 mile jumbo version of the Everglades Challenge, started the 2nd and final leg yesterday. The first leg, raced last Thursday, was a 40 mile sprint from Port Townshend, Washington to Victoria. The rules are simple; no engines, no outside assistance.

Unlike the Everglades Challenge, the R2AK racetrack is open water, very cold and some of the entries are sensible, full out cruising craft. I expect once the dust has settled, the racier catamarans and trimarans will fill the top spots. I don't envy those hardy kayakers in their kayak-trimaran hybrids who will spend the entire race ensconced in their dry suits.

For those who like to get their online jollies by watching the R2AK unfold, the organizers have got that covered - just click here for the race tracker.

There is at least one large open dinghy racing (editors correction: There are two - a Mirror 16 is also competing). Team Barefoot is the product of Barefoot Wooden Boats and is a Tad Roberts design, a 5.8 meter (19 foot) plywood dinghy playing in the same design space for long distance small boats as the i550 mini-sportboat. In looking at the video, the Barefoot dinghy appears to be more in the realm of a high freeboard Classic International 14 from the 1980's. Team Barefoot put this interesting video up on their dinghy and the thoughts behind designing for this race.

Designer Tad Roberts has the sideview and sailplan of the Barefoot Dinghy over here.

Some photos of the Barefoot Dinghy I pulled from the InterWebs. 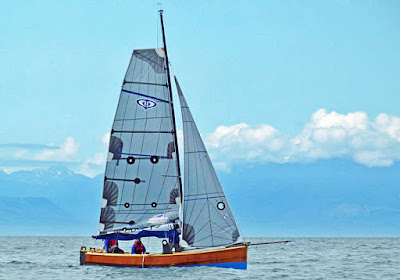 It turns out that Classic Mothist, Jeff Linton, is pursuing the same direction for the next Everglades Challenge. He has scrapped his modified Flying Scot (which won the monohull class in 2014) and is home-building a new 6.7 meter, O.H. Rogers designed, large dinghy for next years Challenge. Boatbuilding details with lots of photos are over at Amy Linton's blog.

Posted by Tweezerman at 4:39 AM 1 comments

Email ThisBlogThis!Share to TwitterShare to FacebookShare to Pinterest
Links to this post
Labels: Other sailing dinghies, Other Sailing Disciplines, Sailing Adventure

GoPro video of several Aussie dinghy classes featuring the Frank Bethawaite designed Tasar, the ubiquitous Laser, what looks like a Holt Pacer but has an NV logo on the sail, and the whoop-it-up Cherub dinghy.

Posted by Tweezerman at 4:13 PM 0 comments