Thomas Clapham: The Genius Who Invented the Racing Scow

This is a glorious age to be poking around sailing history. Google's drive to digitize the world libraries has made it easier to settle in front of your computer and become transported back to another age. And in doing so I have realized how some history has not made it into the present age, or somehow has become distorted with time ---- see my post about who really designed the Star class keelboat.

Thomas Clapham figured out that the lowly scow, the ferry-boat and barge since Colonial times, the 16-wheeler of coastal trade, was the perfect rule-beater for the Seawanhaka Rule, a rating rule for sailboats that had come into usage in the early 1880's. The Seawanhaka Rule was a simple measurement rule; it measured waterline length and sail area and nothing else. If you had a shorter waterline you could carry more sail area for your measured rating than someone with a longer waterline. It is not clear how Clapham figured out all the benefits of the scow shape under the Seawanhaka Rule (a short measured waterline but long sailing waterlines when heeled, more power to handle the sail area as the center of buoyancy shifts to leeward when heeled) but he followed his instincts and, in the spring of 1890, built a 17' scow he was to sail singlehandedly (as he enjoyed doing), the Bouncer.

Clapham introduced his new creation for the cruise of the Corinthian Navy (a loose collection of what seems to be anti-establishment yacht club types throughout New York City and Long Island Sound) at the beginning of the summer of 1890 . The derision heaped upon Clapham was predictable as he sailed up in this strange, blunt, flat, low-freeboard, ugly, angular sailboat. "Barn door", "Pumpkin Seed", "A Cut-Down Bathtub". But on the last day of the cruise, a jaunt over to Glen Cove, this little scow outdistanced everyone, finishing with just one boat in sight. That Clapham was able to beat much longer keel boats with massive sail plans astonished everyone. The racing scow type was here to stay.

In the spring of 1891, the Bouncer type had become a large part of Clapham's boatbuilding production with five on order. For 1891, Clapham had also designed a longer cruising Bouncer, a scow on which he had grafted a bubble type cabin-top. This he named the Chippewa model.

Starting in 1895, in the white-hot competition for the Seawanhaka Cup, the racing scow would be refined in a design competition between Canadian Herrick Duggan and a host of East Coast designers (including Clapham, Crane, Huntington, Cox, Mower and Herreshoff).

Here are the lines of the first scow, Bouncer, as published in the December, 1938 issue of Yachting magazine (the article written by his son, G. Griffin Clapham). The Bouncer has more of an arc-bottom than is seen in modern day scows but is a scow nonetheless 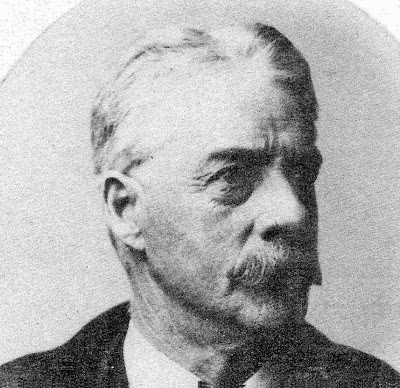 In the third issue of Rudder magazine, C.G. Davis sketched Clapham's Bouncer and Germania (this highlighted two very different approaches to speed in small 1890's sailing craft with Germania being a narrow canoe-type that most likely represented the 88-class St. Lawrence racing skiff) . The first Bouncer had Clapham's favored Roslyn yawl rig though Clapham did build a second, longer Bouncer type in 1890, named Watermelon, with a sloop rig. 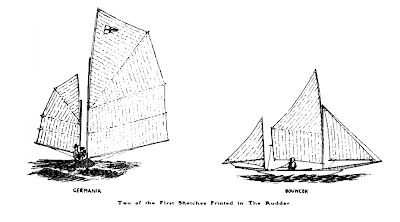 Reuel Parker wrapped up his post about Thomas Clapham with this statement;


"I think Thomas Clapham, right along with Nathanial Greene Herreshoff and Ralph Munroe, must share the title of “Father of the Modern American yacht”.

Let me add that Thomas Clapham was the also the father of the racing scow.

Click here for a post on Larry Huntington, whose scow Question got the scows going as the go-to design in the Seawanhaka Cup, starting in the mid 1890's.

Posted by Tweezerman at 7:50 AM