The Origin of the Star Class: A Gardner Design?

Since WWII the Star Class keelboat has produced a large chunk of U.S.A's top sailors and was, for years, the pipeline to America's Cup stardom (some would still say it is still America's top racing class). It remains one of the oldest one-design classes, designed in the fall of 1910. One hundred plus years on, the Star is a beloved vintage design that has been tweaked and pushed and modified over the years to achieve a level of performance and sensitivity that still excites legions of modern racers.

In recent years I had started to wonder where the Star hull design came from. It seemed to me when looking at the hull it had some of the attributes of the Seawanhaka types that existed during the 1890's; two of them being the short waterline and the long overhanging flat bow, well above the waterline when at rest. The official class history attributes the Star class design to Francis Sweisguth, a draftsman in William Gardner's design office. The Star class design was a follow-on to the shorter Bug class (19 feet vs. 22 feet 9 inch hull of the Star) that was again designed in 1906 by another draftsman in Gardner's office, Curtis D. Mabry.

The Bug class in a photo lifted from the Star class website. 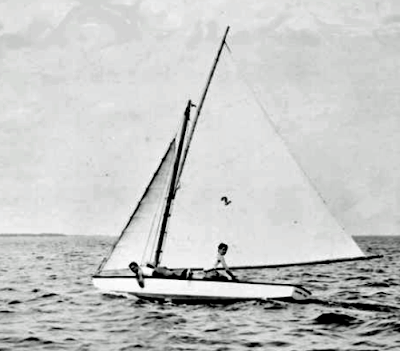 However, both these design dates, 1906 for the Bug class, and late 1910 for the Star class, sits squarely in the period when Herreshoff's Universal Rule was in the ascendancy and well outside the heyday of the Seawanhaka Rule. My hunch that the Star design originated earlier would remain only a hunch.

That was, only until I was perusing online the 1896 issues of Outing magazine, one of Google's digitization of old manuscripts projects. I was reading through an article by R.B. Burchard on the Long Island Thirty Footer class. The Thirty Footer's were a restricted development class built to rules drafted by Herreshoff. They were the sport keelboats of their time; no accomodations, length over all of 43 feet, waterline between 29 and 30 feet, beam between 7 feet 10 inches and 8 feet 1 inch, bulb keel, and separate rudder. Most of the Thirty Footers were built to a Herreshoff design, but William Gardner had designed a flat bottomed chine design, named Departure. At the end of the article, R.B Burchard had the lines to Departure. 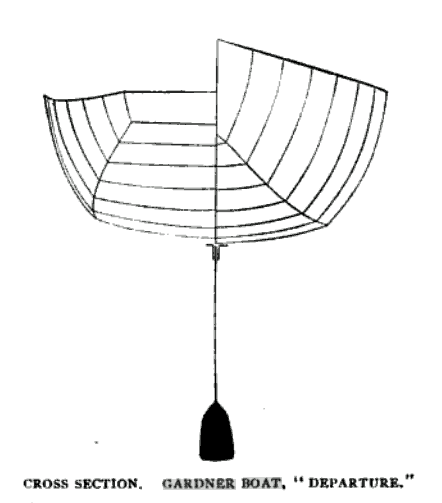 The side view of Departure shows more of the Seawanhaka influence of short waterlines and long overhangs and not so much the sheer of the Star class.

With this missing link filled in, the design progression towards the Star becomes more straightforward. When George A. Corry came knocking on the door of William Gardner's design office in 1906 with a request for an inexpensive to build, but sporty day sailor, William Gardner rolled out the plans for his chined Thirty Footer and went to work with Mabry modifying the long Thirty Footer to a nineteen footer. The sheer changed, became greater amidships and less up front, probably to make the Bug a drier boat (the Thirty Footers were extremely wet boats). The convex topsides went away to make building easier. The long aft overhang went away; this was after all only a nineteen foot boat. Somewhere between Departure, the Bug and the Star the rectangular keel and separate rudder was changed to a swept back keel with a rudder hung on a skeg. But the hull lines remain virtually the same.

To be fair, on the Star class website, from the history of the Star class by George W. Elder, Forty Years Among the Stars, George Elder does mention the William Gardner Thirty Footer design Departure.

The Departure which appeared in 1896 was designed by William Gardner to beat the Newport 30's. It was able to do so in a breeze or with plenty of reaching, but not otherwise. The Departure has straight sides, a chine and a fin keel. It is the last connecting link...


But Elder didn't make a strong enough connection between Departure and the 1910 Star design. Today William Gardner has been written out of the Star design, a design he definitely seemed to take credit for in this quote from 1931 Star class newsletter:

When I designed the Star my aim was to produce a boat that was fast, handy, seaworthy, and that could be built at a moderate cost; these qualities I was evidently fortunate enough to have obtained.


Tom Price adds some further details on the origin of the Star over at this additional post on Earwigoagin.

How cool is that?

Wonder what MacCausland would think of a gaff rig on his Star boat? Would he flake the sail or roll it?

I've always considered the Star to be the ugliest conceivable hull under the stupidest possible rig. If I had designed it I would have kept quiet about it.

Patrick, you've obviously never sailed a Star! The rigs, as they have evolved are magnificent. They go to windward in 20 knots or more with the main sheeted hard in the center, cleated! The sail twists off in a lovely twist and draft power and twist are easily controlled by playing an upper and lower backstay, close at hand. No traveller or constant ragging of a sail. The main goes quietly to sleep, working or twisting in the flowline reducing drag. You can concentrate on steering and tactics.
It's true that the backstays that make this possible, become a challenge on gybes but you can't have everything! Downwind, the rig is let forward over the bow to keep the boom out in lighter air and to keep the drive force ahead of the drag force, keeping the boat in a straight line without steering. In line shrouds and running backstays make that possible. They go downwind better than most boats with spinnakers. The Star planes readily in stronger winds and surfs easily and steadily. On a reach (which they seldom include in races), the quarter wave trough is located exactly where the long boom end is to keep it from dragging in the water.
The hull is an attractive chine hull with a long snubbed nose. The flat or even slightly reverse sheer keeps it modern looking while the rolled hull deck joint looks sleek, is comfortable to hike on and sheds dameage from other boats and docks. The wide side decks let the occasional knockdown happen while keeping a dry cockpit. The old fashioned rudder and skeg are inefficient, it's true but they force you to steer well and minimally (as you should in any boat), while always maintaining flow to the rudder. A Star almost never broaches (but the helm gets mighty hard when sailed poorly!).
For daysailing, yes, the rig is a handful, with it's low boom and backstays. In race mode, it's a wonder - unlike any other boat in it's efficiency.