As I get older, I make mistakes .... BIG MISTAKES in my sailing regattas. At the 2008 Classic Moth Nationals, I capsized upwind, had an OCS, and T-boned Joe Bousquet at a weather mark.

At the 2009 Mdwinters, in race 2, I had the mainsheet knot come undone and the mainsheet snake itself through the boom blocks. In the unintended stop to fix the problem, I never got back to the group I had been dueling with.

In race 4 on the second reach, I was pushing the boat hard by the lee. Mike Parsons, who can go deeper with his unstayed rig had already gybed over but I persisted. Not for long! The sail unloaded .... the Moth, already heeled to weather, took another quick lurch and despite my quite comic efforts to climb the mountain, spun out and capsized.

Picture from Amy Linton............Double click on pic for higher resolution. 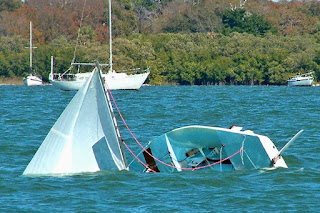 Capsize to weather is always the worst and I seem to do it regularly. It always involves a double capsize to get going again. Step1, get the boat up and it capsizes again to leeward. Step 2, climb onto the daggerboard and right the Moth from the weather side. There was the option of riding the daggerboard under the water to quicken the process but the water seemed too cold and I wussed, instead swimming around for the second try. I ended up last when all this was sorted out. I got one boat back by the finish but there was my throwout!

I had some decent starts but on two of the starts in the Midwinters, I lost track of where I was in the sequence and was rewarded with some disasters in the second row. They say the human brain can slow time down in emergency situations. My brain was doing a good job of replicating this behavior just trying to start a sailboat race.

Finally I had a tendency to hit the weather mark, doing this twice in the Midwinters.

Why all these mistakes? Impatience? An inflated sense of how my reaction reflex used to save me (remember the quickness I had in my 20's). Who knows? When I am in the midst of flailing about, I may grind my teeth at my incompetence, but age has at least given me the wisdom to laugh at these foibles.

From Len Parker, a picture of me upright at the Midwinters; 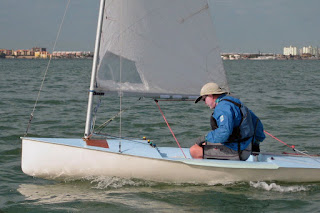 Tip of the hat to Tillerman who also regularly documents his failings on the race course.
Posted by Tweezerman at 6:15 PM