As the 12 meter yachts will be forever linked to Newport, Rhode Island, the North American decked sailing canoe and its modern incarnation, the International Canoe, will always be inextricably linked to a tiny inlet on Sugar Island called New York Bay. Bay is a grandiose term for a body of water you could easily throw a baseball over, but it has been the center of decked canoe sailing for over a century. During the July ACA encampment, the International Canoes race for trophies that arguably are the oldest in small boat sailing; the Crane, the Mermaid, the Butler, and the Championship.

The campsites for the decked canoe sailors and families ring New York Bay. There is a constant bustle of kids swimming, kayaks coming and going, boat tweaking for the next race. On one side of the Bay are the wooden floats where most of the IC's are kept. On the promontory, just beyond the floats, is the Steve Lysak cabin with a expansive view of the St Lawrence. There is a small beach where kayaks and IC's on dollies reside. New York Bay is tucked away out of the prevailing southwesterly's, so much so that one can leave the sails up during the day with no excitement.

Some photos...... As always you can click on the photo for higher resolution.

From the Edwin Schoettle book, Sailing Craft, published in 1928, there is a photo of the floats on New York Bay filled with 16X30 decked sailing canoes. The tent on the left occupies the same space the Steve Lysak cabin sits today. 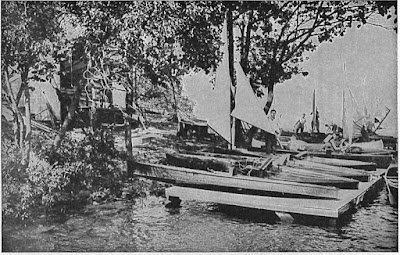 Canoe floats on New York Bay over 80 years later. Some of the fleet at this years Encampment.......... 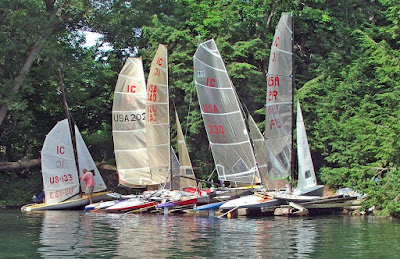 Looking out from New York Bay onto the St. Lawrence. Marilyn Vogel sailing her ACA rigged open canoe. The Canadian town of Gananoque is about 2 miles in the distance. 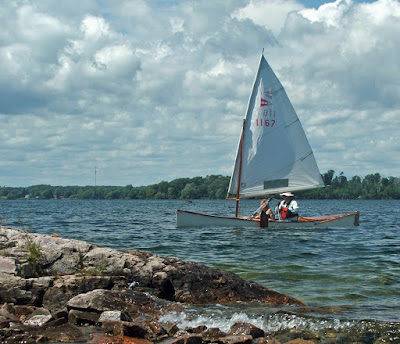 Finally, International Canoes launch for the afternoon races. Note the varying techniques to navigate out of the windless New York Bay.


Note; There is an error in one of the titles of the video. Sugar Island is in Canada, not New York.
Posted by Tweezerman at 5:23 PM