This blog vicariously visits exotic sailing locale mostly through YouTube videos. The blogmeister, not being particularly flush with cash, does most of his jaunts up and down the East Coast of the U.S.
Transplanted Englishman, Len Parker of the Mashed Minifish project, sends along a travel report of a cruise he and his mate, Ray, did on the English Norfolk Broads this fall. This past summer, I had done several posts on the traditional dinghies that race the Three Rivers Race on the Norfolk Broads, using Dylan Winter's gorgeous videos that, unfortunately, have gone away. As Len relates, cruising on the Norfok Broads is done in traditional boats with big rigs, on narrow rivers, with masts that can be lowered under bridges, and of small towns with pubs close at hand.

"In late September I flew over to England just a few days after getting back to south Florida from my adventures with the MiniFish at the Classic Moth Nationals.The plan was to land at Heathrow , rush down south to the Isle of Wight ... say a quick hello to my parents , say a quick hello to my kids , grab something warmer than shorts and flipflops , also make sure I had loads of tea bags , then a few hours later jump in Ray's van , back on the car ferry & 250 miles North up to the Norfolk Broads where we'd hire a classic sailing dinghy for three days and Ray would 'show me the ropes'.

We got to the famous Hunter's Yard in Ludham in the wee 'early hours , had a cup of tea or three and waited patiently for them to open. They hire a variety of lovely looking wooden classic sailboats and we hired "Sundew" , a 1950's Waverney One Design gunter rigged 22+n footer with 290 sq ft of main & jib. All the boats have high rigs , probably to get sail area above the high reed beds on the narrow river stretches.

We had 200 odd miles of the waterways to explore including Hickling Broad , Ranworth Broad and Barton Broad , plus the rivers Thurne and Ant. We followed some of the route of the famous 45 mile long three rivers race ( Thune , Ant , Bure). Areas of the rivers are really narrow , so no time for brewing tea , it was tack-tack-tack. Then it opens up into a Broad. Beautiful scenery and wildlife.
The original plan was to sail , camp , sail , camp , sail ... but seeing as it was late in the season , and what with my knee & jetlag as another excuse , we soon changed the plan to sail , pub , hotel , sail , pub hotel ... A much better plan ! We figured that as kids were long back at school there shouldn't be too many grockle families ( tourists ) clogging up the place in their large hire motorboats ... luckily we were right.

We had a mix of wind conditions varying from rowing in the doldrums , to gusts of over 25 knots , and after the rental lady mentioned that we ought to reef the main when the wind piped up Ray laughed , saying that only girls and poof's do that on a river.

Sundew was surprisingly nimble and easy to control but being the novice I am , I had my moments. We were hiked out as far as we could be a few times , great fun. It was brilliant to see some of the boats with their huge sails dwarfing us. The largest was named White Moth , very apt & I took a photo. It was fun to spot a sailing dinghy ahead of us , as we couldn't resist "hunting them down".

We went under the 13th century Heigham Bridge. You have to lower the pivoting mast onto a brace on the transom & row under the little 6' high brick built bridge. No tides to worry about , sounds easy ... yeah right ! .. The current was ripping through the bridge. One person steers , one person rows backwards whilst straddling the mast , boom & sails. You duck and hope for the best. Luckily we did good , but it was knackering and then you have to row another 100 yards to clear another bridge before you can restep the mast, then have a cuppa and carry on your way ... I let rip about 50 unmentionable swear words in 30 seconds , thinking we were going to smash the hull , so hats off to those crews who do this whilst racing. Of course we had to do it all again on the way back , but at least we knew what to expect.

It was great fun exploring and after running aground in the deep mud a couple of times , you soon realize that the channel markers are spot on. The Norfolk folk are a friendly lot , but they really do have a funny accent as it's really rural and proper "carrot country". It was a great trip , and I'll be back for sure."

Len sent along some pictures. (Click on picture for higher resolution.)

I think this the large Broads Cruiser "White Moth". 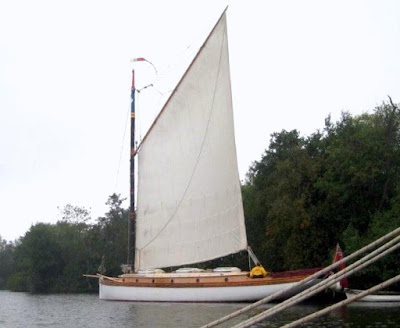 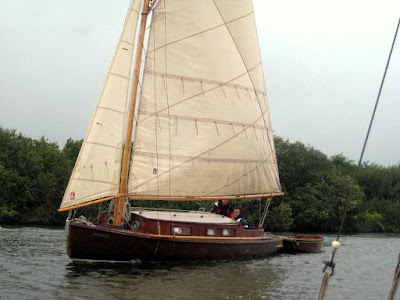 "Sundew" chasing down a cruiser in the narrow confines of the river. 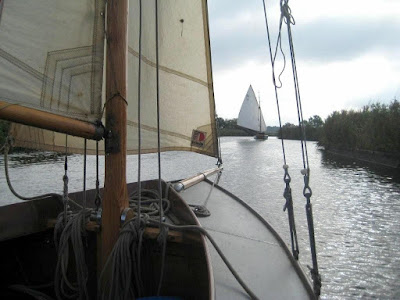 Ray with "Sundew's" mast lowered for negotiation of the Heigham bridge. 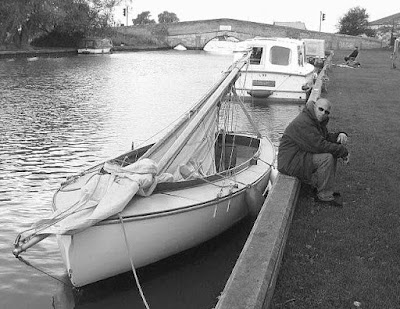 "Sundew" at the dock. 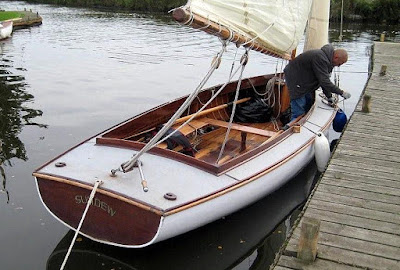 Len skippering on one of the wider expanses of water. 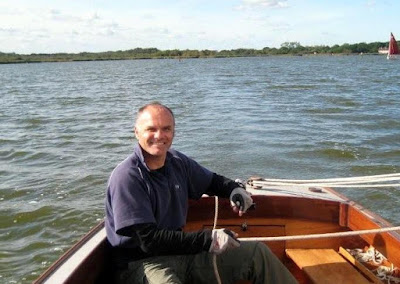 so excited to visit Norwich... The River Wensum connects Norwich to the network of rivers and the Norfolk Broads