Drawn to all things just different, I couldn't pass up taking photos of this modified Sunfish, the Solar Fish, that showed up at the 2012 Mid-Atlantic Small Craft Festival. Very ingenious. It was designed to be a sit-in, non-hiking day sailor with a small cabin. I took a quick once-over on shore but didn't have a chance to talk to the owner/builder. Some features that were apparent in my quick glance over were;


The Sunfish sported Ohio registration numbers. There seems to be a large number of retired machinists from the now-gone heavy industry factories of Ohio that seem to love hacking into various projects.


The Solar Fish made it out for a sail-about before the sailing race but didn't participate, instead smartly returning to shore under power, ignoring the contrary wind blowing off the Museum shores. 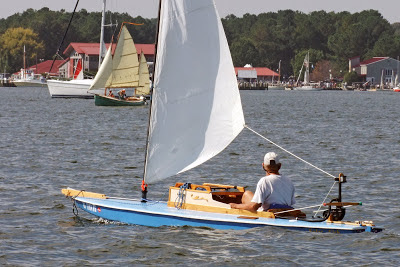 A side on view of the Solar Fish under sail..

Two photos on the trailer. 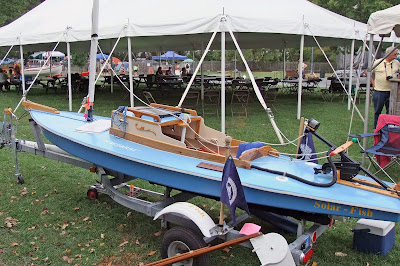 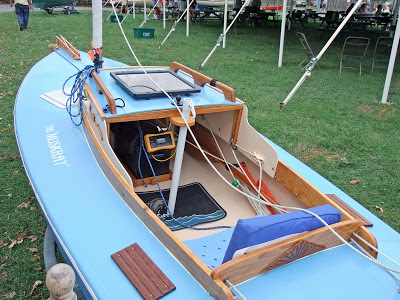 Posted by Tweezerman at 8:14 AM

wow, that thing is just bizarre! it sure seems like there could have been better options to start from if he was looking to make a boat like that.

do you mind if I post one of your pictures of that boat and a link back to here on my Sunfish sailing blog?

My2Fish - take whatever you need with my pleasure. I raid the Internet for content all the time and am happy to oblige one of my favorite bloggers.

I raid the ol' net all the time, too... but I usually like to ask if it's someone I know.

Usually with such things the choice of boat is governed by what is lying around, rather than by logic.

Love the thinking behind it.