Just up the road from me, Classic Mothist John Z is steadily making progress on on his modified Mistral Classic Moth. This Mistral is a bend-em-up tortured plywood construction using 3 mm. ply throughout. I decided to pop over to take some photos as John is about ready to slap some decks on this Moth. I wanted some pictures that highlighted the internal structure of a racing Classic Moth.

A racing Moth makes do with three bulkheads, one about 610mm (two feet) from the transom, another at the aft end of the daggerboard trunk (about 1520-1650 mm or 60-65" from the transom) and the final one at the forward end of the daggerboard trunk (this one is angled as called out for in the Mistral plans). You can see the inboard construction of the seat tanks - John likes building his out of flat plywood sections. 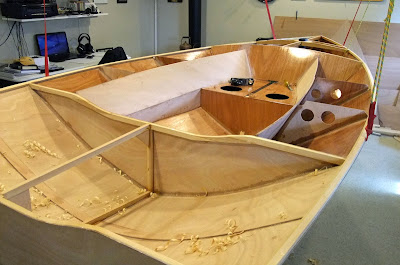 Two bow-on shots that show the mast structure. John is putting in a freestanding mast and has built a carbon mast tube that extends to the keelson. There is not much structure up forward in these boats. 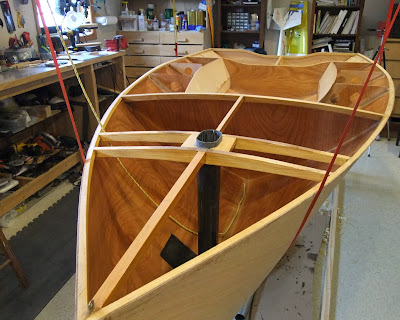 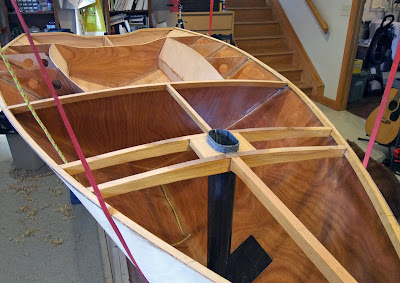 Proud builder. John also builds the ultalight F1 rubber-band powered free-flight model airplanes, stored in the special box that hangs on the back wall in this photo (you may have spotted some other model plane parts scattered around his work room). 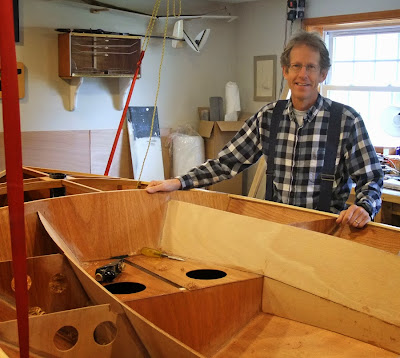 Lest you think these Classic Moths are so light to be throwaways after a couple of years - not so. Johns' current Mistral is fourteen years old, Joe Bousquet's National Champion is even older. You do seem to have to replace a deck or two every so often but the structure is adequate for continual racing abuse.

Fellow blogger George A. has been reporting on John's Mistral build with some regularity over the last year and it would be worth jumping over to George's blog and reading several posts.

Posted by Tweezerman at 6:37 PM

I was just thinking about John Z the other day. Thanks for the update.