No blow-by-blow description of Race #2 from Fran DeFaymoreau but Fran does go into some of the damage meted out to the IC fleet by the San Francisco wind and chop:

"Today [ed. note - Second Race], Swede OLa Barthelson had a broken shroud. Dave Gilliland bent his rudder shaft (about 1/2" solid stainless) which was straightened using a hole in trailer frame and cheater pipe. Steve Clark USA 250 and Michael Costello USA 228 both broke their daggerboards. Of the many others I did not inquire, but the sailors were busy beavers throughout Richmond Y.C's dinghy park.


From the Internet I pulled the following about Race #2; Mikey Radziejowski (USA) won his second race ahead of Chris Maas (USA) in breeze that had a little more weight than the first race - hanging around 20 knots.

Fran mentions the T-bone incident from race 1. In a situation somewhat similar to my previous photo from the 1993 Worlds, Chris Hampe (GBR) had a bad start and decided to bail out onto port tack. Unlike I, who got away cleanly, Chris, once on port, narrowly missed one starboard tacker but the second one hit him squarely in the side. To show how far technology has come in twenty plus years, Chris has a GoPro documenting his every move. even the dumb ones (thank goodness that technology wasn't available to install on the tiller of my IC in 1993 - today I'd have video that would still keep me wincing in disbelief.) Chris put his T-bone gaffe up on YouTube - he had Monkee repaired and out to do battle to a top-ten finish for race #2..

And from the Earwigoagin archive, more still shots grabbed from the famous VHS video shot at the 1993 Worlds in San Francisco.

Fredo Beers (GER) becomes disconnected from his IC in spectacular fashion. (Hey, this happens on an IC every so often, one moment you are sitting on the sliding seat, the next you aren't - don't ask why!) 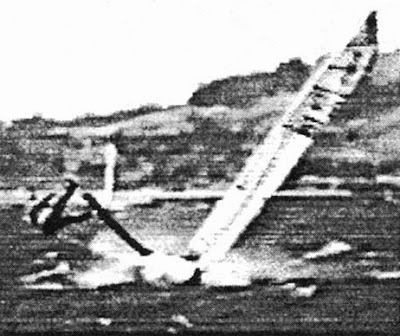 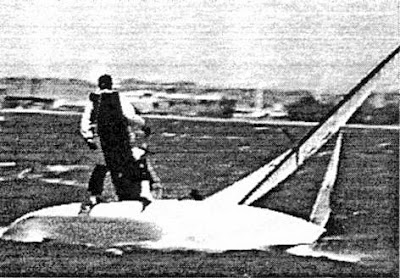 Posted by Tweezerman at 4:35 PM