Scows at the 2015 International Moth Worlds

Seven Australian scows, a mixture of old and new, are sailing in the 2015 International Moth Worlds hosted by the Sorrento Sailing Couta Boat Club, Victoria, Australia. For news on the 2015 Moth Worlds, it is worth clicking over to the popular Sailing Anarchy blog for Mr. Clean has been omnipresent, recording races live, doing interviews and documenting the ups and downs, both on-shore and in-the-water, of the professional programs that dominate the hi-tech foiler crowd. The scows are definitely the amateur, old-fashioned, side-show in this regatta, but, to Sailing Anarchy's credit, they have been devoting some of their coverage to the scow crowd.

Back in September, Aussie Mark Hughes, wrote me an email with some links to a flat-pack scow kit he had designed and, from which, one hull had been built over the 2014 Australian winter. It was a modified Ray Hilton Bunyip IX design (the plans which have been posted on this blog). It consists of pre-cut carbon/foam pieces which are assembled inside a snap-together jig, also supplied in the kit. Pretty nifty but there were some unanswered questions I had about the construction. (Such as how do you get the carbon/foam panels to bend into the jig?)

Mark has a blog on his M-Scow-03 design which offers up, for free, the plans for this scow Moth. There are 10 PDF plans as well as CAD cut files available for download.

Here is one of his PDF sheets. Very high quality CAD work here. Again to open this PDF in another tab, click on the pop-out icon (the box with the upward facing arrow, upper right corner).

Ah, it seems the blogmeister has lost his train of thought and digressed away from the scows in the 2015 Worlds...but, patience dear reader, there is a connection. It turns out the Brian Sherring, the owner and builder of the first M-Scow-03 is sailing at the Worlds and he was the subject of a Mr. Clean interview which can be seen over here on Facebook.

There are two other scow photos of interest from the 2015 Moth Worlds, both of them I'm reposting from Sailing Anarchy (again a TOH to Sailing Anarchy for covering some of the scow stuff).

Father/son team, Ian (dad) and Andrew Sim (son) in front of their scows. Andrew is sailing a 1980's vintage Stunned Mullet design. The blond wood decks are lightweight hoop pine plywood, which was an Aussie-only product of the 1980's and no longer available. His dad, Ian, is sailing a more modern foam/glass scow design. (Photo from Sailing Anarchy) 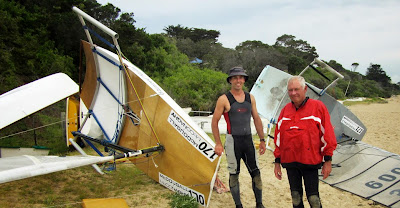 Wednesday's racing for the Worlds was canceled when a vicious low decamped over Sorrento. One of the French father/son combo, either Jim or David, decided to take his scow out for a burn in the gale. (Photo from Sailing Anarchy)

It's also apropros to repost this YouTube on the Aussie Scow Moth (Ian Sim is the fellow who is last up in this video):

I have to say, Rod, our Classic Moths would be much more interesting boats if allowed to have decent rigs!

I have designed two more modern looking Classic Moth sails - not too far from the planform I see on the latest generation singlehanders; i.e. Aero, D-Zero, Melges 14, but for a 15' luff length.

<a href="http://earwigoagin.blogspot.com/2010/05/classic-moth-fathead-experiment.html>Click here to read the post on those sails.</a>

Ooops forgot a set of comma's on the previous comment.

Well that link didn't work either. Let's try one more time. (I wish you could edit comments after the fact.)