I was set to drive over to St. Michaels for the Mid-Atlantic Small Craft Festival, that first Saturday in October, to view the hodge-podge of small craft, most home-built, but it was a weekend of torrential downpours. Just before I was to get into my car for the one-hour trek to the Eastern Shore, I checked the weather radar and there was a blob of precipitation camped over St. Michaels. (The precipitation was caused by an offshore low which also has a tendency to flood the Festival site - boots required.) I cancelled my plans and stayed around the house, puttering on various projects.

In checking through the photos of the event it looks like:

This Nethercott looks suspiciously like one that was put together by my friend George Saunders - at least the color on the hull matches. In viewing the two photos I could find online, the new owner has converted this tricky, all-out racing, sliding seat singlehander to a multi-use recreational craft. The modifications I could spot were:

Unfortunately there are no photos I could find of this Franken-Nether-IC sailing which may indicate an engineering failure in one of the systems (for one, the beam with the amas and the height of the amas looks to be inadequate for a powerful sailing rig). An interesting concept though and hopefully I'll bump into this craft in the future. 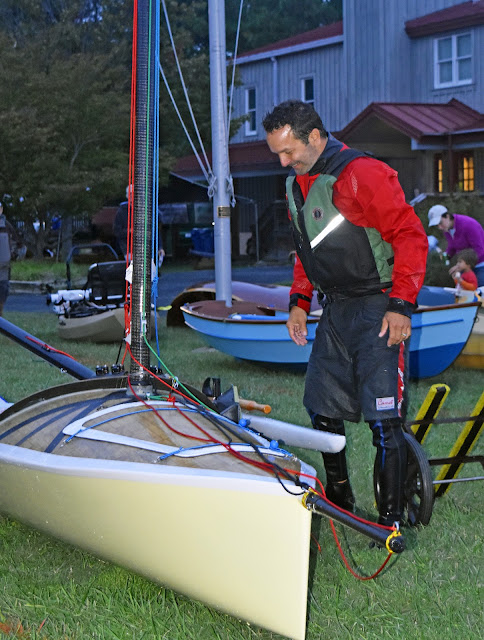 "My love of Frankenboats can never be requited" - RLM

Posted by Tweezerman at 4:00 AM

Funny I was thinking of doing something similar to mine; it's such a lovely hull shape, and so hard to master in a breeze (when you get to my age!).......seems the obvious choice, hope you can get more pictures/info on how it worked out.
Mike

It also looks like a suitable candidate for the long distance races - Race to Alaska, Texas 200, etc....
Mike