Part 2: Mystery Sailing Canoe: How her identity was solved. 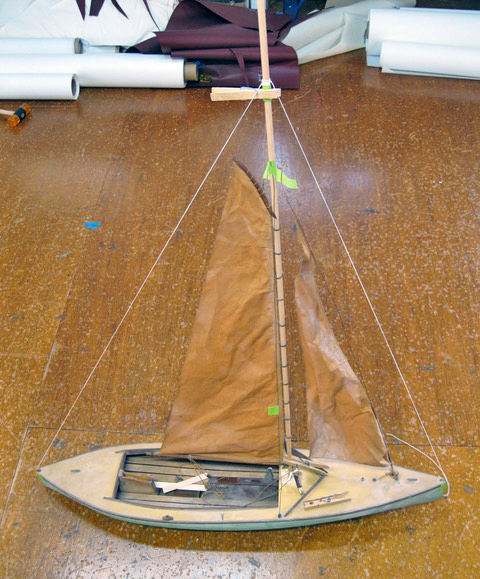 Where we continue the quest to solve the identity of a sailing canoe model (above photos) that was purchased off Ebay by sailmaker Douglas Fowler. Refer back to the Part 1 post for an introduction.


Looking at the photos of the model, I immediately dismissed an American origin for the design. American sailing canoe classes either centered around the mostly decked, low freeboard, lightweight, sliding seat canoes (16X30) or the ACA canoes of the depression era which were essentially paddling canoes with lateen rigs. This looked like one of the English cruising canoes. The Scots and English had been using canoes to cruise big water since the 1870's. (The west coast of Scotland with it's nooks and crannies and islands was a favorite destination.) An early photo of the Loch Lomond Canoe Club below: 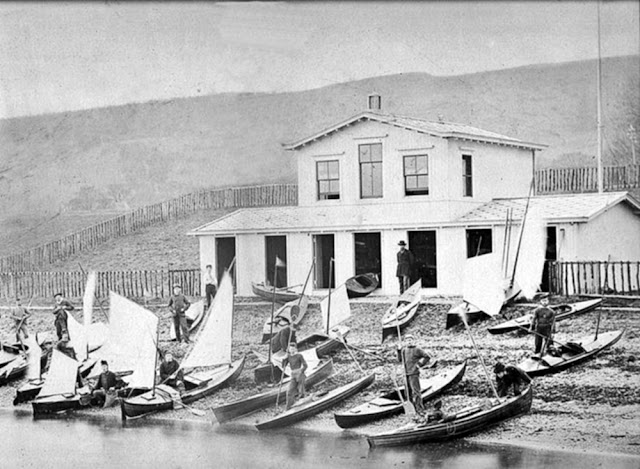 Around the 1900's, the English had developed the B-class canoe, with higher freeboard and a gunter rig; no sliding seat. Certainly the English B-class sailing canoe hull shape looked similar to Doug's model and I put that suggestion out there. Below is a Beken photo of the B-class canoes. This looks to be from the 1930's when the class was modernizing. Number 18 has the original lower aspect, longer boom sail plan. Sail area was 150 sq. ft. (13.9 sq. meters). Given that Doug's model had a higher aspect main (with a funny little gaff) and a sail area which was definitely smaller, this would prove problematic. 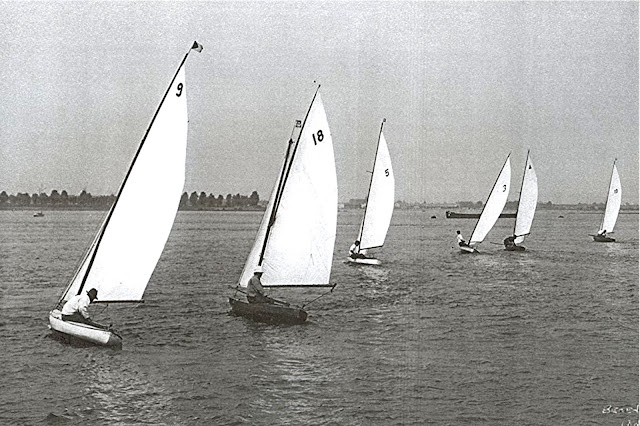 Doug tracked down Andrew Eastwood, who had written a history of the English sailing canoe about twenty years ago. His reply put the kibosh on the idea that this model was an English B canoe.


"One, the most important being that the sail area is too small for a RCC B class, so she must, most likely, have been rigged to fit with the 10 sq m rule, which was 1936. If you look at the B class in the book they were sailing with about 150 sq ft and the boom extended almost to the stern. Two, the general shape looks wrong. The Royal Canoe Club B class were very full in the fore and aft quarters, whereas your model looks less so. Three, about 20 years ago I came across a canoe lying derelict and persuaded the owner to let me take it. It was a canoe called 'Zenith' registered as K 26 by the Royal Canoe Club. She was originally a Swedish B canoe but measured as a RCC B class under the rules of the time. The UK numbering for the IC (10 sq M canoe) is a continuation of the numbering started for the B class."

Andrew suggested this model may be a Swedish B canoe. Off I went to the Internet and used what I found to write this post about Swedish sailing canoe classes. The problem with the Swedish B canoe is the modern version is very similar to an OK dinghy - not at all like Doug's model. Maybe a Swedish C class canoe? (Rickard Sarby's Swedish C-canoe became his famous Olympic Finn design.) Again, the only modern photo I came across has this Swedish C-class canoe with a ketch rig, not a sloop rig. Perhaps a Swedish E-canoe? But I couldn't find a photo of one. Does the class still exist? 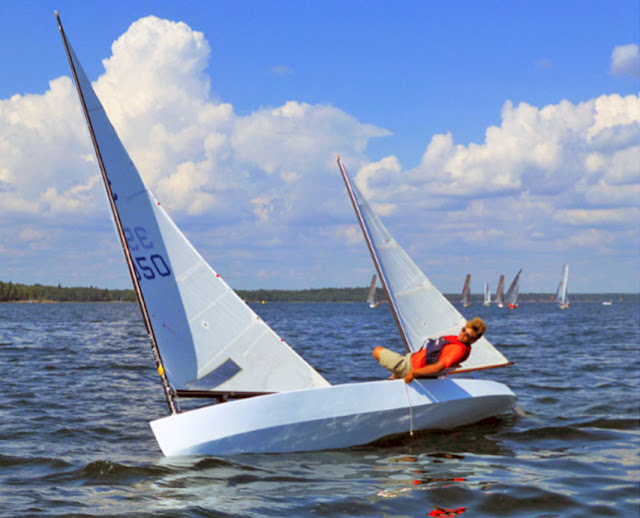 The blue sailing canoe [above] is a Swedish C-canoe, probably from late 50's or thereabout. I think the design was called "Celita". Sail area 10 m2 and length 5.50 m. The general appearance seem to indicate the Stockholm archipelago,
Bengt Andersson

The English connection had been scrapped and the Swedish connection didn't look too likely. Meanwhile, Doug had also dragged two of the foremost sailing canoe experts in North America into the email conversation; John Summers and Joe Youcha. John had initially come down on the side of the English B-class canoe. Joe had noticed some details (pea green hull color, deck details) that were characteristic of Herreshoff construction. Could this model be a L. Francis Herreshoff design? We have this L. Francis 10 square meter design done in the 1930's (see photos below) but the rig was wrong and the hull too narrow. Add this to the fact there didn't seem to be any provision for a sliding seat on the model. We were increasingly facing the prospect that Doug's sailing canoe model may be a one-off that would be impossible to track. 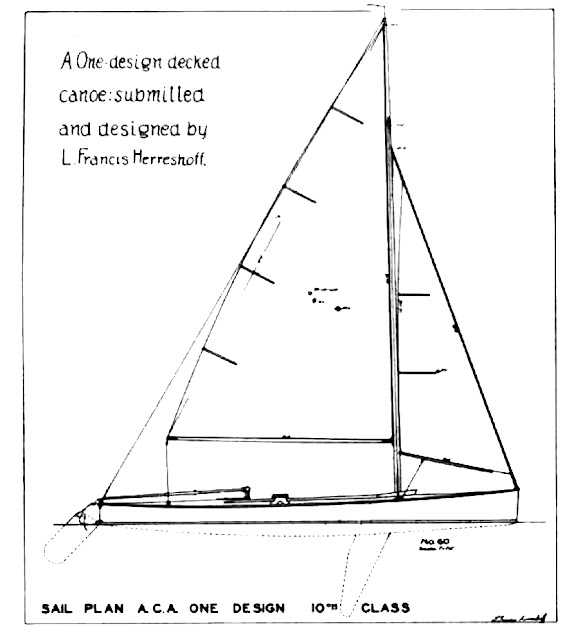 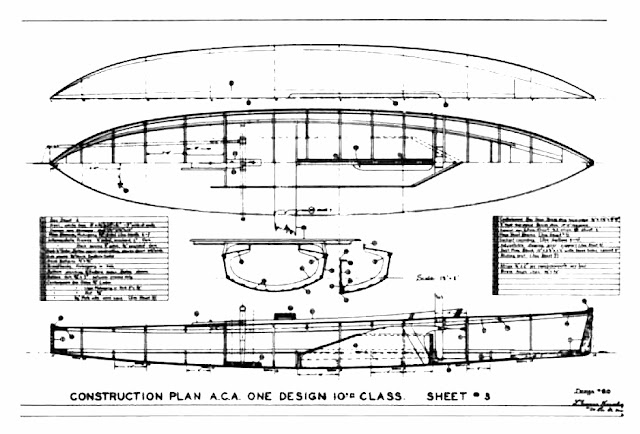 Joe Youcha suggested that Doug contact Maynard Bray, a marine historian (WoodenBoat technical editor, Mystic Seaport Museum) who has wallowed in more boat plans and boat designs than all of the rest of us combined. Boom. We hit paydirt. Maynard did an immediate ID and sent back this Rudder article. Doug had a model of a Bill Garden design, a 20 foot sailing canoe initally designed for paper construction. 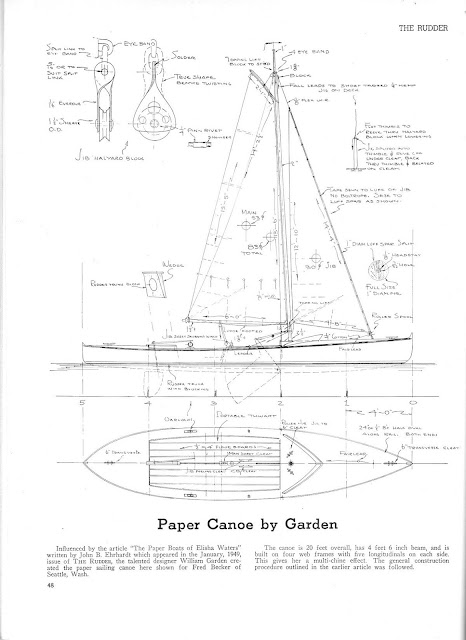 So I was wrong. It was an American design after all. John Summers wrapped up this very interesting trek through sailing canoe history with this very succinct quote:


"If Maynard doesn't know then no-one knows! Always did like Garden's drafting style. He drew some quirky boats--why the little dutch gaff, do you think? Thanks for solving the mystery."

The model after a winters work.

Posted by Tweezerman at 9:11 AM

Aha, so you found it, of course we all knew you would...! (Elementary, my dear Watson....!) Lovely design, I wonder if any/many have actually been built....

2019-06-18
The blue sailing canoe is a swedish C-canoe, probably from late 50:es or thereabout. I think the design was called "celita". Sail area 10 m2 and length 5.50 m. The general appearance seem to indicate the Stockholm archipelago,
Bengt Andersson

Nice to see a mention of Zenith. I bought Rannoch, an Uffa Fox International Canoe from Andrew Eastwood in about 2004 and Zenith came with her. Zenith is currently being restored in my workshop as she require significant work (90+ new ribs etc).

Zenith was designed by Sven Thorell and built in around 1926 by Nunns in Waldringfield.