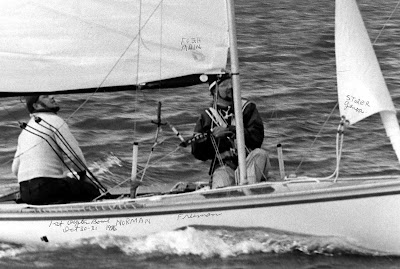 Rod, your sailing experience is unparalleled. Are there any boats you haven't sailed?

Yeah, I've sailed on lots of different small dinghies (not too much on catamarans). Nowadays (with age) I've become more discriminating about what I try out. A friend of mine keeps bugging me to go out on his Aussie 18 but I'm not too thrilled about being flung about 18 feet into the mast if we capsize. Same with the foiling Moth. With a foiler a one time sail would only be a capsize fest and to buy a foiler and put the time in to enjoy it is not where my head is at these days.

What a lot of good stories you have!
-Amy

Sea Stories are the glue that ties us together. The parties, the stories, the laughter are as much what sailboat racing is about as the actual cut-and-thrust on the water.