The previous header photo was of the "Wee Georgie" a 1988 reproduction of the Aussie 6-Footer Historical Skiff Class. Aussie Robert Tearne built her and she is shown on the dock sporting her light-air rig with a boom at least over 2 times the length of the boat and a bowsprit approximately 10 feet long (3.19 meter). Talk about being over-canvassed. The 6-footer class takes the cake for being the craziest of the crazies!

There is a second reproduction Aussie 6-Footer, the Balmain Bug, built by Ian Smith in 1994. Balmain Bug has been sailed regularly since about 2015.


"It is believed they were first built at Balmain in the 1890's and although they were first conceived as children's boats, there is no doubt that they demanded the strength of three men who were courageous, good swimmers and had the strength and agility of circus acrobats...They carried a staggering 1000 square feet of sail including a main, jib, topsail, spinnaker, ringtail, and even a watersail. [Mike Scott, over in comments, defines watersail as..."hung below the main boom to catch that extra drop of wind.....almost drooping in the water....hence the name....!] With so much sail up and so little to support it, it is hardly surprising that the 6-footers spent a lot of time "in the gutter"....

The class peaked during the early 1900's, attracting numbers because it was the cheapest way to go racing. Here are some photos of the early 6-footers sailing around 100 years ago. [Found on the Net] 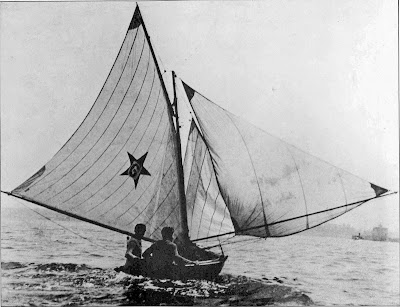 The original crews sailed the 6-footers upwind with the bowsprit plowing a furrow in the water; probably the only way they could balance the whole package upwind. 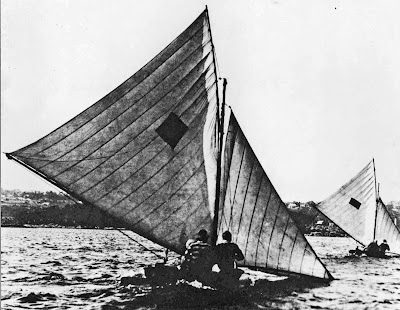 Now for photos of the modern 1994 Smith reproduction 6-footer. A picture of the "Bug" off-the-wind in a fresh breeze, shortly after being launched. Looks like the crew is trying to get to the back of the bus when reaching but, alas, there is no back of the bus. 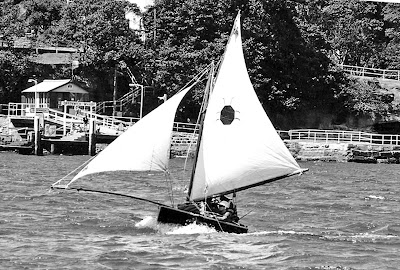 After ten years out of the water, the "Bug" was relaunched in October for this year's Balmain Regatta.

A quote from crew Campbell Reid:


"Even though she is based on a design close to a century old you can see how for their time these boats were pretty high tech...She will bury her bow in the blink of an eye but we were impressed at how seaworthy she was and were really happy that we could get upwind pretty well. In the six foot division of the historic skiff fleet at the regatta we think we are a serious threat.


The precarious crew position Campbell Reid finds himself on the foredeck/bow may be the most comfortable one in drifting conditions. [The next two photos pulled from the Balmain Sailing Club website.] 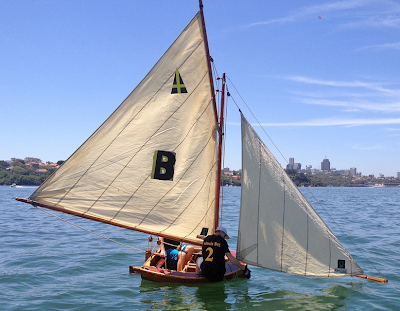 Stick two grown men into a 6-footer and the scale becomes obvious. A 6-footer becomes a true "micro" dinghy. 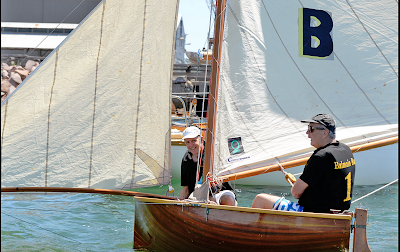 The obligatory GoPro video shoot from this years relaunch. The bowsprit is so long it gives a perspective of a much larger dinghy. The 6-footers, like her bigger historical cousins, sported canvas lee cloths in a vain attempt to keep the water on the outside


A more recent 2015 video of the Bug including flying a good size spinnaker without driving her under. (Came pretty darn close though!)

And the videos keep on coming. A 2017 video of the Balmain Bug.

This reminds me of stuff we used to do as kids...rig incredibly small kiddy pools with over-sized rigs using closet poles, shower curtain clips and bedsheets. But they rarely ever made it to the water let alone floated!

And I absolutely love Cygnet II

Excellent, love those crazy Ozzies...! I believe 'water' sails are hung below the main boom to catch that extra drop of wind.....almost drooping in the water....hence the name....!
Mike

G`Day! Just a correction, i only found this now looking for a pic, The sepia pic is a crop of a sequence of the Robert Tearne 1988 built Wee Georgie. ( Pic taken by Bruce ) who later went for a spin during the 1993 ANMM Winter Festival exhibition.
When you see hull lines Ian`s Bug is lower freeboard. Good News is the Bug finally has a big rig, video of the Balmain Regatta 2017 shows her.
Cheers.

Thanks for the comments. I've made the corrections. I've seen the video of the Bug with her new sails but it doesn't seem to have made it onto YouTube.