"The Dean of American Yachting" was how historian Peter Spectre characterizes W.P. Stephens, a seminal figure in the early history of American sailing. Stephens' comprehensive but somewhat disorganized account of the formative years of American sailing, Traditions and Memories of American Yachting,  concentrates on the latter twenty years of the 19th century, and is the primary source for the history of early American recreational sailboats, from the diminutive sailing canoes all the way up to the large America's Cup yachts. (Some of the disorganized nature of Traditions and Memories... is due to it originally appeared as serialized articles in Motor Boating magazine starting in 1939. Besides his personal recollections, W.P. Stephens also added, almost willy-nilly, many of his collection of lines drawings to the series.)

W.P. Stephens started out as a canoe builder and designer but by 1883 became canoe and sailing editor at Forest and Stream magazine. With that editorial bully pulpit of Forest and Stream, the premier sporting magazine of the day,  W.P. Stephens found himself placed at the epicenter of the beginning of American recreational sailing. Forest and Stream, under W.P. Stephens, didn't hesitate to publish and review all sorts of sailing designs, but W.P. Stephens himself was an aesthete who saw yachting beauty in the narrow shapes and swoopy sheers of the sailing canoe and the English cutter and not the boxy chined shapes of the American sharpie or scow, or the vertical stemmed, no overhang, pinched shapes of the sandbaggers.

In 1892, W.P. Stephens published two of his small boat designs in Forest and Stream and shows where Stephens thought, in the early 1890's, the future of small boat sailing should be headed. One is a centerboard daysailor/cruiser based on the sailing canoe, La Gloria, and the other one was a fin-keeled daysailor/cruiser, Scarecrow, that is an interesting hybrid of different design philosophies (a flat sectioned shape married to a long counter stern being one).

A portrait of a senior W.P. Stephens as it appeared in Traditions and Memories of American Yachting. (Artist unknown) 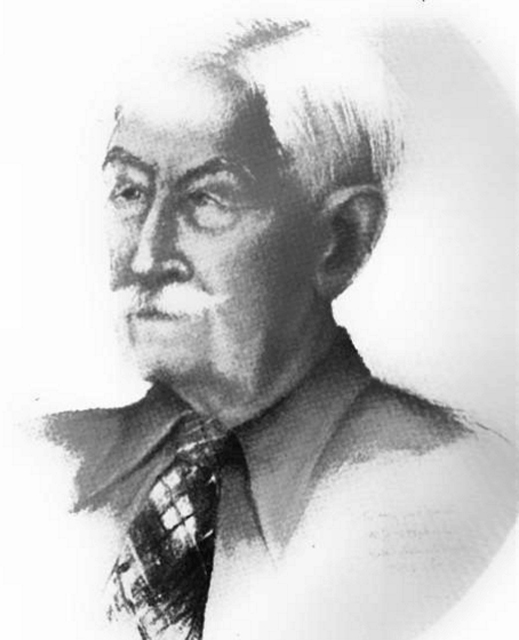 La Gloria was a canoe inspired cruiser designed in 1892 by W.P. Stephens  and shows the effort to move the sailing canoe towards a larger, less athletic centerboard sailboat that could comfortably carry more than one sailor.  W.P. Stephens writes that it was based off his Delta design of 1886 with the intention in La Gloria to "produce a handsomer and more stylish boat, and to realize such advantage as may be had through a moderate overhang forward, the stern being carried out to give a graceful finish, with some added power." This is certainly a more yachty looking centerboarder then the sailing canoes of the late 1880's. W.P. Stephens offered up La Gloria in two sizes: a 15' 4" LWL model with 4' 6" beam, and a larger 18' LWL model with 5' beam. The body sections show flat canoe-like sections with a slight reverse at the keel-line. 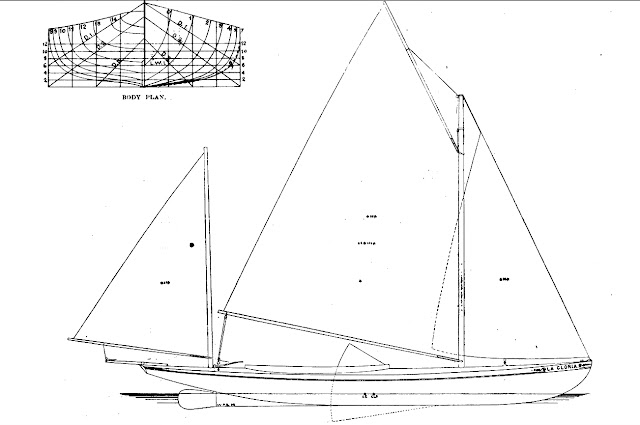 The same year, 1892, in November, W.P. Stephens published the lines of Scarecrow, a fin-keel sailboat (though it could be fitted with a centerboard and internal ballast if desired) designed for the more open waters around New York City and offered in two sizes, the two waterlines identical to La Gloria. though Scarecrow's beams are wider. A quick glance at the drawings of Scarecrow shows how innovative it was in 1892; the original owner C.J Stevens had specified a gunter rig instead of the normal gaff rig, and W.P Stephens had added a bulb keel specified at 600 lbs. total weight. It is a narrow hull, the rocker line is easy, finishing in a long counter stern. The sections are flat. (Stephens said he was using the sections to a Barnegat Bay Sneakbox as an inspiration.) W.P Stephens comments on the lines of Scarecrow:


"Whatever disadvantages may be justly laid to the score of modern yachts and small craft with long, ends, this much must be said in their favor, that they are easy models to build, the beam is moderate, the whole form is full and fair, without the humps and hollows of the old fine-bowed craft with full quarters [ed. note: Stephens is referring here to the sandbagger]." 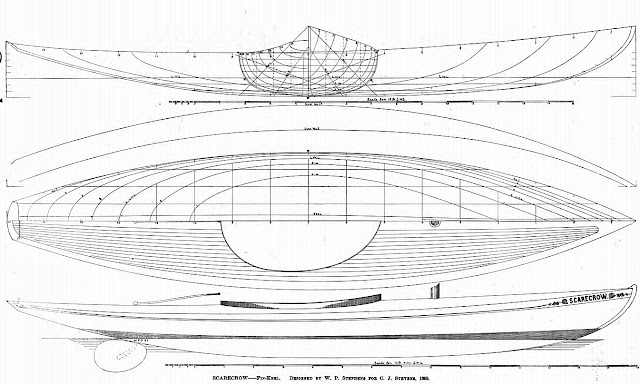 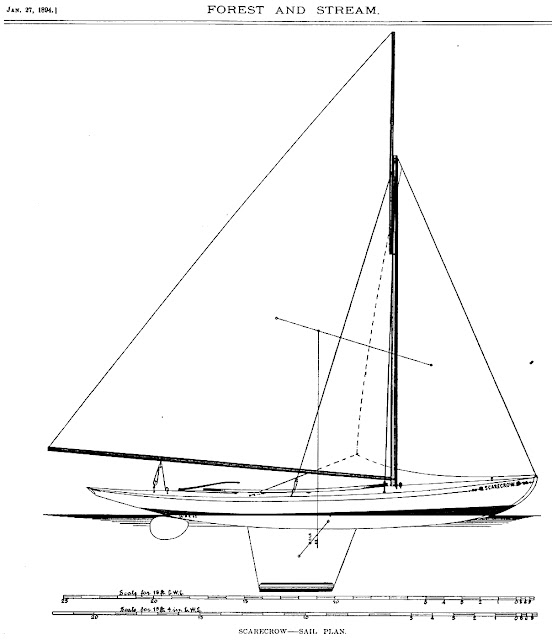 Posted by Tweezerman at 8:14 AM