The Jester Dinghy: The Known and the Unknown

Of late, I've been inexorably sucked into a tale of the two Jester Dinghies, one known, one unknown.

When doing a Google search, the Jester Dinghy that pops up is a 8' dink designed by Santa Cruz ULDB designer George Olson, and built by Ron Moore in the 1970's. The Jesters raced out of the Santa Cruz, harbor; a cramped short harbor, the shoreline packed full of boats and docks, the north harbor and south harbor split by a bridge. The Jester has the reputation as one of the scariest boats to sail in a breeze, probably because the short hull features the fine ends of a rowing dink combined with a large, high aspect ratio rig, stepped right at the bow. This must amp up the bow-down power downwind to uncontrollable levels. Reference this quote from Latitude 38 magazine, July 2018, page 86:


"Skip [Allan] says the only way to jibe [a Jester] when it's windy is, "You run it into the beach, turn it around, and hop back in."

Although I've passed through Santa Cruz a couple of times in my travels, I have never seen this Jester in the flesh.

The previous header photo, plucked from the Internet, shows Jesters racing in an expansive body of water; which is obviously not the Santa Cruz harbor. You can make out the very fine, wineglass transom which suggests the Jester was more designed for rowing than sailing.

Racing in the Santa Cruz Harbor. If the sail numbers are correct, it looks like the class made it to 200 boats. I do like the stylized logo of this Jester. 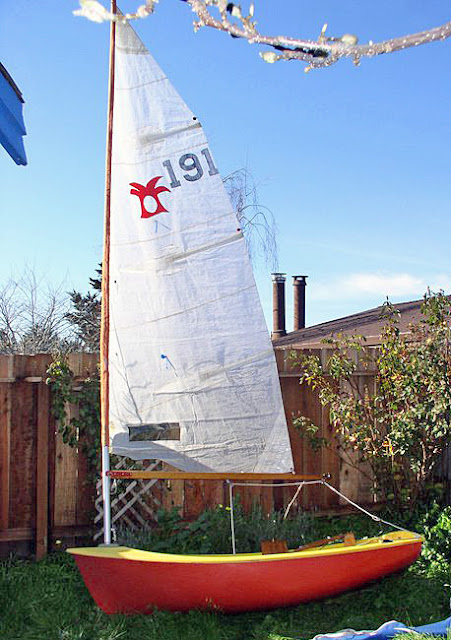 Famed naval architect, Paul Bieker, (International 14 boffin with success in that class rivaling fellow North American Bruce Kirby) put together a modified Jester for his son. (It appears the molds for the Jester have ended up in Northwest Washington State.) He has designed a gaff rig for his Jester, similar to the one he introduced on his high performance PT Dinghy, a Tasar-killer 14 foot design. 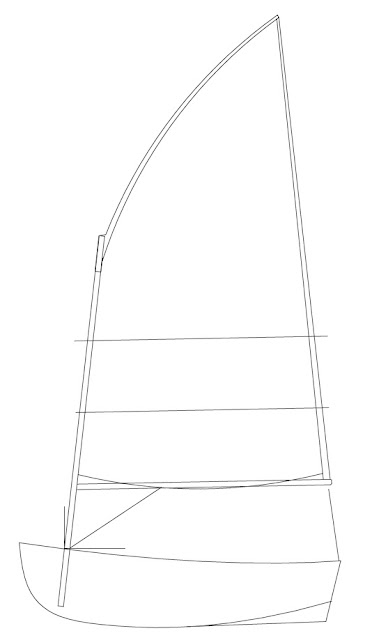 Paul had a sail made out of Tyvek which lasted a good five years. 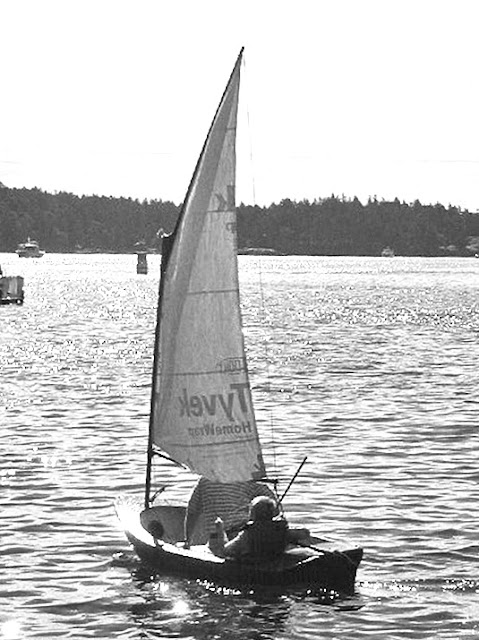 The Santa Cruz Jester based on a generic East Coast Dinghy?

The last two years, on my walkabouts around my hometown of Annapolis, I had noticed a mystery dinghy tied up to the floating dock of St. John's College. It obviously was a main and jib dinghy, the length was shorter than 14 feet (4.26 meters), the design had high freeboard and she was very simply rigged. Despite staring at it for a while, I could not ID this class. I shrugged. One of those unknowns.

But it was not to be left at that. Over the summer, my good friend Mike Waters, became the latest St. John's sailing coach/boatshop manager. I gave him a hand at an Intro to Sailing event he ran at the beginning of the school year. I was taking groups out in this very same dinghy I had been pondering over. It was slow but commodious for it's size with some nice bench seats. It was then I learned that this dinghy that had been donated to the St. John's program was a different Jester class dinghy; American built, but otherwise origins unknown.

Since then Mike has hauled the Jester out to have the bottom scraped of a healthy growth of barnacles and to get some paint on her. With the hull flipped over, the hull design is very interesting; a flat bottom forward with a circular transom. This is definitely not a rerun design of Uffa Fox's formulaic deep forefoot with straight flat aft sections.

Mike with the sanded Jester on the trailer. 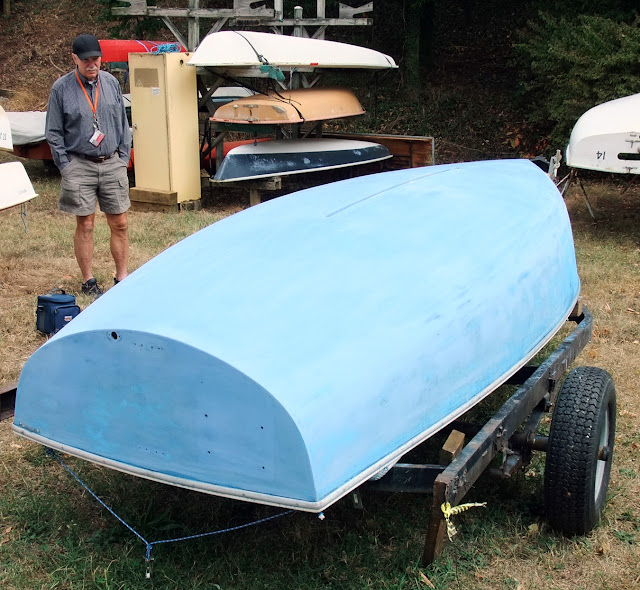 Flat U-sections forward. Max rocker amidships. The little data we were to glean from the Internet has the Jester at 12 foot (3.6 meters) length and 5 foot (1.5 meters) beam. Both Mike and I feel the Jester has potential in a college program like St. John's (where racing isn't the priority and the waters on College Creek are very cramped.). We are just wondering who designed her and who built her. (Again, the Internet seems to point to Ohio, but who knows.) 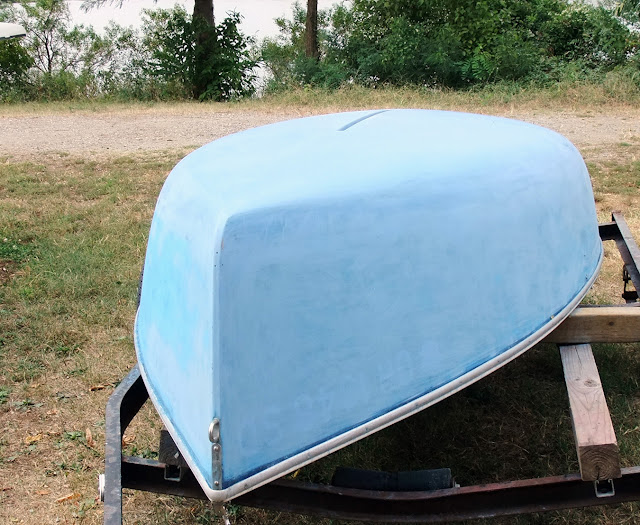 The Jester logo on the sail. 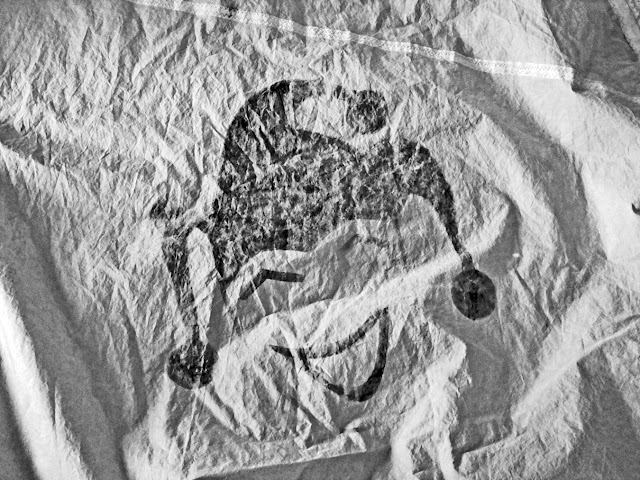 The rudder has the more modern rectangular shape. We are guessing a 1970's build time frame for the St. John's Jester. Anyone that has come across this Jester class in their sailing lifetime, please leave a comment.

Mike Waters in front of the St. John's boat house doors. The college has a sizeable fleet of crew shells as well as sailboats.

Bingo, We now have the designer of the St. John's Jester Dinghy. From a comment:


The Jester was designed and built by Cleveland, OH Sailboat dealer Jack Butte. Jack sold primarily one design daysailers, and saw an opportunity to use the influence of the Thistle, Flying Scot, and Rhodes Bantam to design a 12’ dinghy... My parents sailed with Jack Butte at Edgewater Yacht Club, and I sailed with his daughter as part of the junior sailing program

Posted by Tweezerman at 5:48 PM

Three of us built the molds for the second round of Jesters from Santa Cruz those boats were numberred 6, 7, and 8 I do in fact have a lot of jester history in my mind.
If anybody wants more info contact me (Howard Spruit)

Howard, Go to "About Me", View Complete Profile. Contact email should be on that page.

We just picked up a Jester dinghy at a yard sale near Hood Canal WA. How much weight can it hold? Thanks! Kari

Here is some information on your unknown Jester.
The Jester was designed and built by Cleveland, OH Sailboat dealer Jack Butte. Jack sold primarily one design daysailers, and saw an opportunity to use the influence of the Thistle, Flying Scot, and Rhodes Bantam to design a 12’ dinghy. I have an original brochure and will post if I. Can figure out how to add a pic.
My parents sailed with Jack Butte at Edgewater Yacht Club, and I sailed with his daughter as part of the junior sailing program

Unknown: A very big thank you for adding the origins of the Jester. I can see the Rhodes Bantam influence in the flat bottom. I'm going to move your comment into the main post. Send along the brochure if you can.

Look at my profile in the main page for contact info.

How much does my Jestur 12 to 14 footer weighs? 8 inch trailer wheels seem undersized and 12 inch would be better. garyolix4@gmail.com

I have an early Santa Cruz-built Jester Dinghy I'd like to give away in Southern California (Orange County). I also have sail #1. Anyone interested? Please let me know. Thanks!