The previous header photo was of a pair of 110 keelboats bashing upwind back in the 1970's. The 110 was an odd-ball 1936 Ray Hunt design, born in the Great Depression era. The hull was a double-ended, narrow canoe shape, flat-bottomed. I've bumped into them occasionally.  At a wedding at Ocean City Y.C, New Jersey in early 2000's I found a small fleet on trailers in the dinghy park. There was also one that showed up at the WOOD regatta back in 2011. My friend Tom Price has one awaiting restoration. I've never sailed on a 110.

The class was originally strong in New England with pockets scattered throughout the U.S. In the present day, it seems most of the 110 activity in the U.S. has shifted West; just north of San Francisco; Tomales Bay, with a fleet at the Inverness Y.C.

The distinctive shape of the 110 can be seen in this heeled-over photo pulled from the InterWebs.

The specs for the 110 as put out in the OD-OY magazine's annual class review. The hull weight is 412 kg (910 lbs.) which is identical to some of our heaviest North American dinghies. 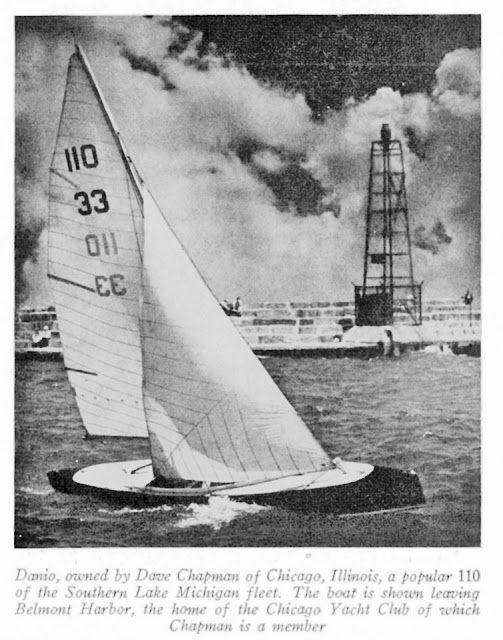 Posted by Tweezerman at 7:25 AM