Two weeks ago, WoodenBoat Magazine ran a regatta for small wooden racing sailboats. Dubbed the WOOD regatta, it was held at Rock Hall YC on Maryland's Eastern shore, about an hour drive for me. My weekend was already spoken for (graduations) but I was able to make it over on Friday afternoon to catch some of the early arrivals.

From my vantage point on Friday, before the racing commenced, the regatta seemed to attract three disparate groups;


And there were other sailboats not so easy to pigeonhole; the modified Ray Hunt 110 keelboat and Dudley Dix's Paper Jet plywood performance dinghy.

Some pictures and commentary;

The Fireball (along with the 110) were the most tricked out racing craft there. The Fireball sported all the go fast gear from mast ram to a Technora mylar main. The crew also sported the most sensible sun gear going; a one piece cover-it-all up. Picture from John Z. 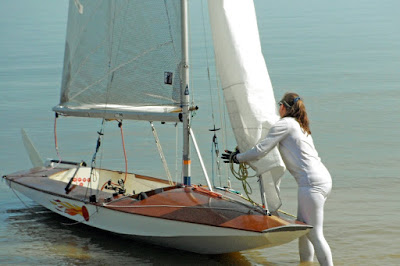 Eli Slater and Ross Weane showed up with the venerable Ray Hunt 110 design (a slab sided, flat bottomed canoe shape - a shape originally derided in the late 1930's when it appeared as "a cigar box"). Eli and Ross had added a second trapeze and an assymetric spinnaker; neither mods are class legal. The 110 also had Kevlar fore and aft sails.

Eli wrote a very interesting boat blog called "Eli Boat", sadly, no longer around. This blog "Earwigoagin" owes much of it's style to Eli Boat. I had an interesting conversation with Eli and Ross, most of it centered around the Frosty dinghy, a class in which both are top competitors. Like the Classic Moth, the Frosty is a builders class and Eli has been one of the main driving forces in souping up this micro 6' racing dinghy. 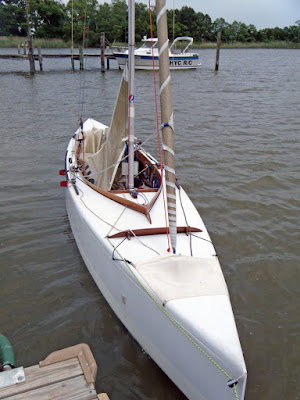 Just had to put a photo up of my self designed Classic Moth, the TweezerD. Ed Salva borrowed her for the weekend. Bill Boyle currently boards TweezerD and has her up for sale on the Classic Moth website. Look for Cedar Strip Moth . 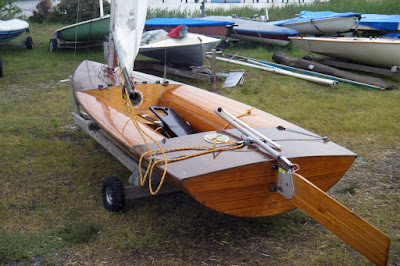 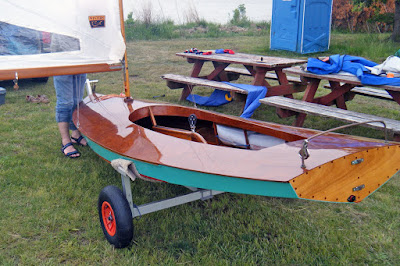 Dudley Dix showed up with his original Paper Jet plywood skiff design. Dudley is a very prolific designer as can be seen from this listing on his website . Dudley has put a massive rig atop this very low freeboard skiff hull. To my mind, it looked to be quite a handful even with a trapeze (though he admits he designed it with two agile teenagers in mind). Also intriguing is the lack of carbon anywhere; all the spars and sprit were wood. Dudley says that 53 of the plans have been sold (at the normal 10 to 1 ratio of plans sold to actual boats built, this equates to 5 hulls making it on the water). Photo from John Z. 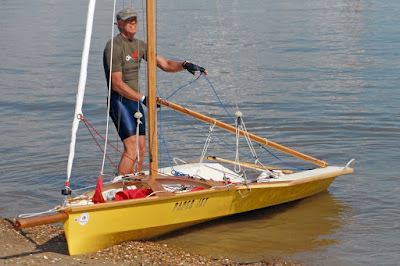 "Caribe" was a one-off 16 footer. When eyeballing "Caribe" I saw a stretched Flying Junior, others saw a wooden Buccaneer. Cold molded in construction with a cut down 505 mast and sails, "Caribe" was a very credible sailboat, a first rate effort and worthy of others being built. 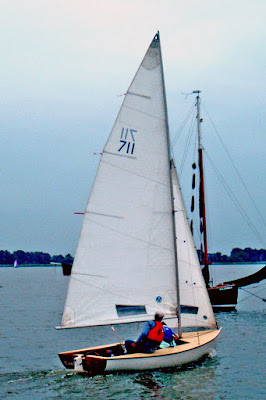 "Haiku" was a one-off from a fellow up from Florida. It started off as a picnic boat. Blow up the photo and one can see the round seats for enjoying cocktails in the aft transom corners and amidships. The design got racier in the design process and is extremely wedge shaped with a very fine bow. The aft sections are very wide, again to facilitate evening sunset socializing without upsetting the apple cart. The rig is set very far forward, so revelers don't have to worry about conversing over a boom with flaked main. Construction is double chine plywood, with the bottom panel 9mm thick and the two side panels at 6mm. 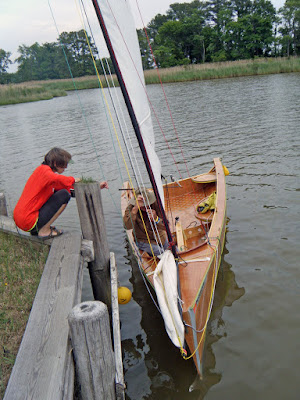 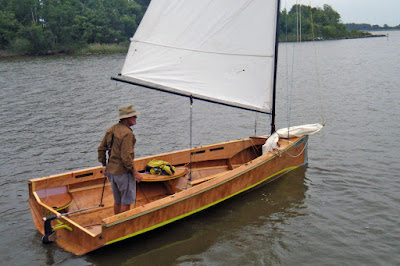 And finally a beach shot of a wooden 16 foot Wayfarer, an Ian Proctor design from the 1950's, made famous by some very long distance dinghy cruises undertaken by Frank Dye. 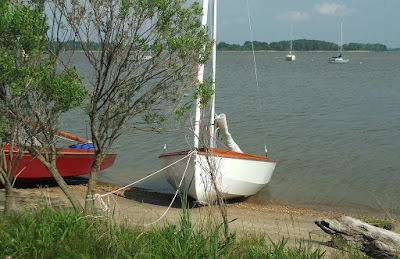 Posted by Tweezerman at 8:40 AM

Email ThisBlogThis!Share to TwitterShare to FacebookShare to Pinterest
Labels: Boatbuilding, For sale, Other sailing dinghies

Not a Thistle in sight?

There were a lot of no-shows from the original registration list. Two Thistles were registered but didn't make it. A shame as they would have given the 110 a run for the money, particularly on Saturday in light air.

Nice to see the ubiquitous Wayfarer in the credits