My catboat posts elicited more email and comment than usual. Two of my readers pointed out their favorite catboats (which happen to be from English designers). 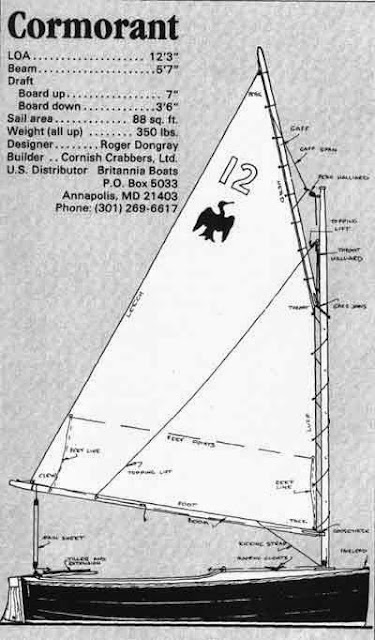 Kiwi Neil Kennedy likes this traditional catboat from English designer, Andrew Wolstenholme. I'm not sure what the design name is for this catboat (that is, if you were searching within Andrew's design portfolio for plans), but this design just oozes classic beauty. Below is an example on display at the London Beale Park Wooden Boat Festival. 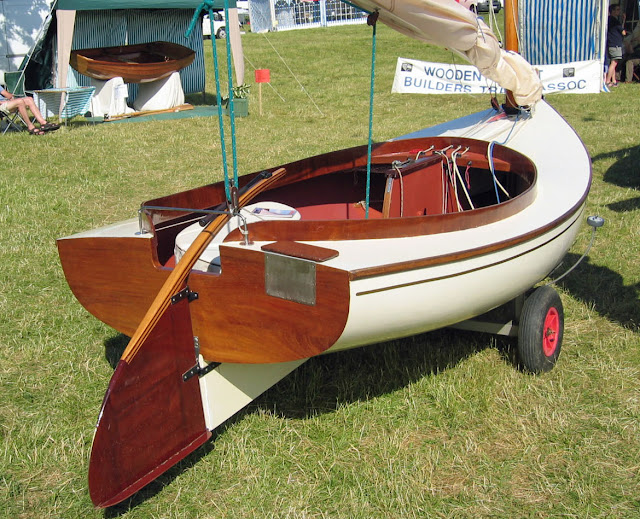 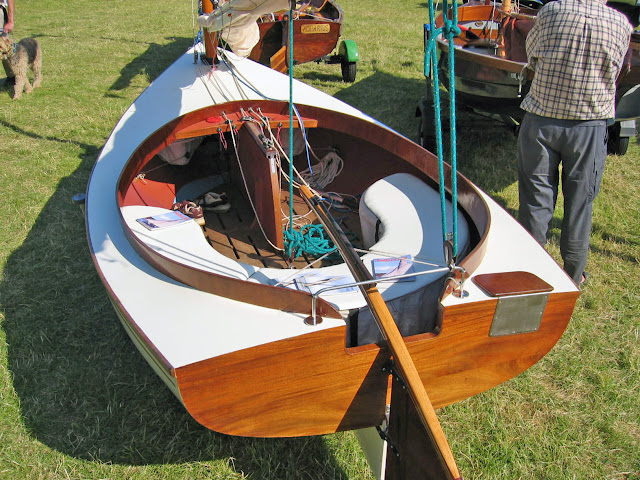 Describing a sailboat as a catboat can cover a huge spectrum of design shapes and rig choices and evokes a passionate attachment to this type, or to that type. It is a catboat, where many of us focus so keenly in putting our study and experience and joy with the beauty of sailboats and in how a boat moves us when we are on the water.

Posted by Tweezerman at 5:47 PM 4 comments

No sailing here. Just work, watersport and romance. That just about sums up life.

Did I ever mention I lived in Canada from age 3 to 11.

Posted by Tweezerman at 5:08 PM 3 comments

Ian Oughtred on Building a Gwen 12

Famous classic boat designer, Ian Oughtred, got his start in the sporty Australian Gwen 12, a single trapeze, DIY plywood, double hander. He was class champion sometime in the 1960's. Andrew Chapman has been feeding me some Gwen 12 material including this article by Ian Oughtred on building the Gwen 12. This looks to be from Seacraft issue of boat plans.

The Gwen 12 was designed by Australian Charlie Cunningham in 1948 as one of the first stressed ply dinghies. Like most Australian designed plywood dinghies, the Gwen 12 was extremely popular in the 1950's, 60's,  and 70's but died out in the 1980's. Below is the cover of the May 1958 Seacraft issue with what almost looks like a colored post card of the Gwen 12. 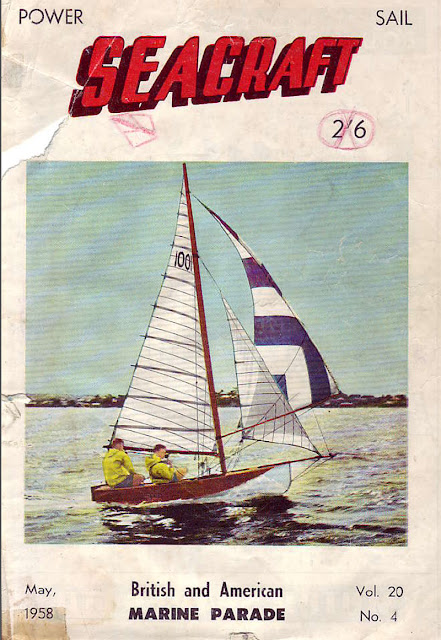 Here is the article by Ian in PDF format. Click here for 1971 plans for a double-bottom version of the Gwen 12.

Posted by Tweezerman at 4:23 PM 2 comments

In keeping this catboat thread going just a post or two more, here are two photos from the 2017 Mid-Atlantic Small Craft Festival.

A catboat out romping on Saturday afternoon. 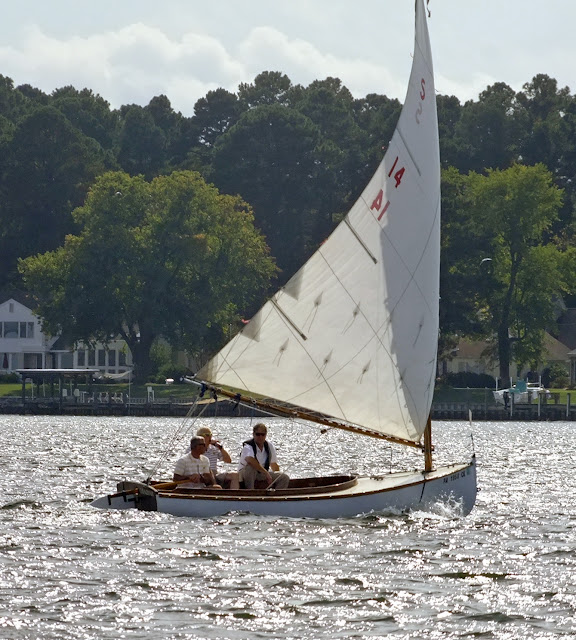 Two catboats amongst the scrum before the start of Saturday's race. 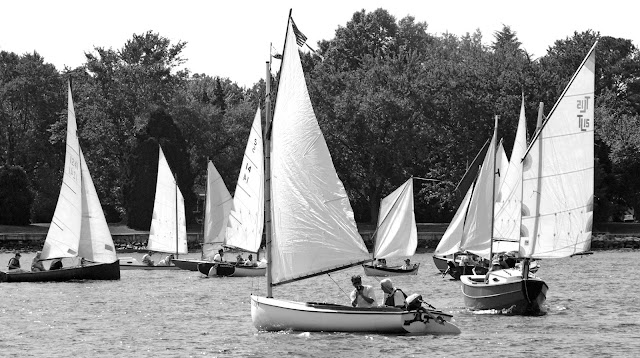 Posted by Tweezerman at 4:25 PM 0 comments

From the very large (Silent Maid) to the micro; a 7' by 4'6" (2.13 meters by 1.37 meters) catboat. In the early 1990's, Brooklyn NYC artist Don Betts designed a very small catboat; the PeaCat. Despite the tiny size of PeaCat, I always thought Don did a good job at replicating a catboat design. I never saw a PeaCat in person but, from the following photos, at least two were built. It is unclear if anymore were built. The hulls were built using stressed plywood. 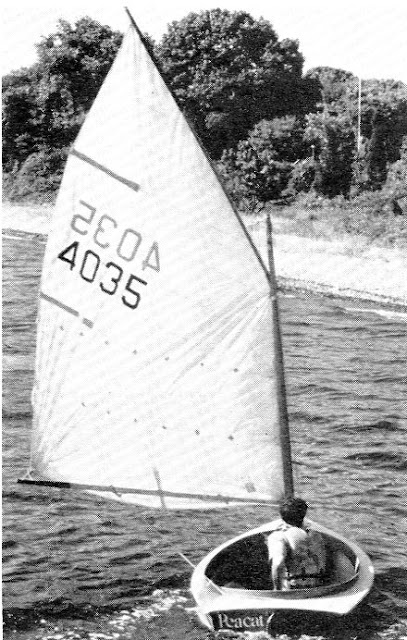 messing about in BOATS
Carrying capacity; one adult or four small kids. 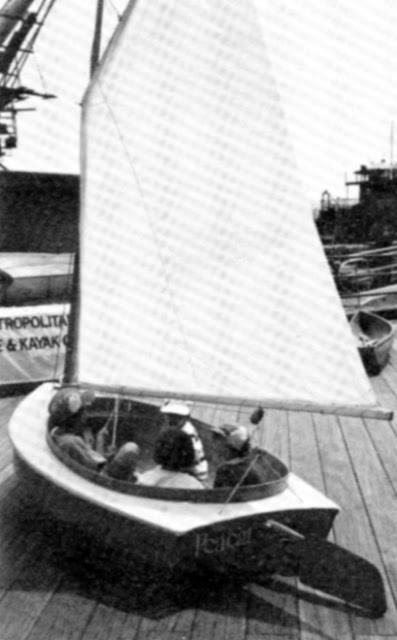 Don Betts didn't skimp on the rig for PeaCat. 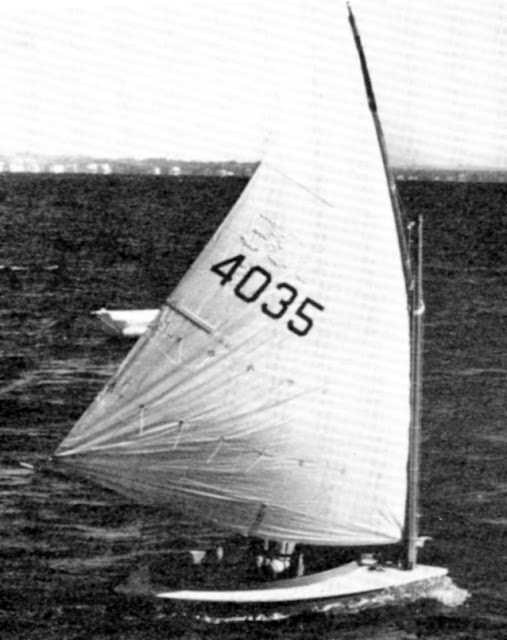 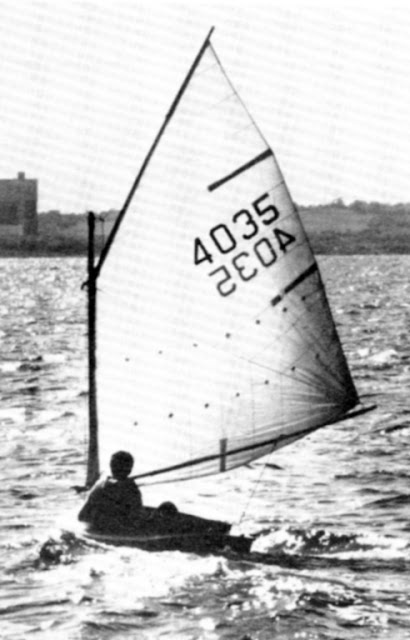 Don took one of the unfinished hulls and treated it as a hanging sculpture for a photo shoot. You can see the bend-em-up shape in this photo.

Nice high, catboat coamings provides some measure of dryness for this tiny sailboat. I'm not sure how the tiller arrangement worked. 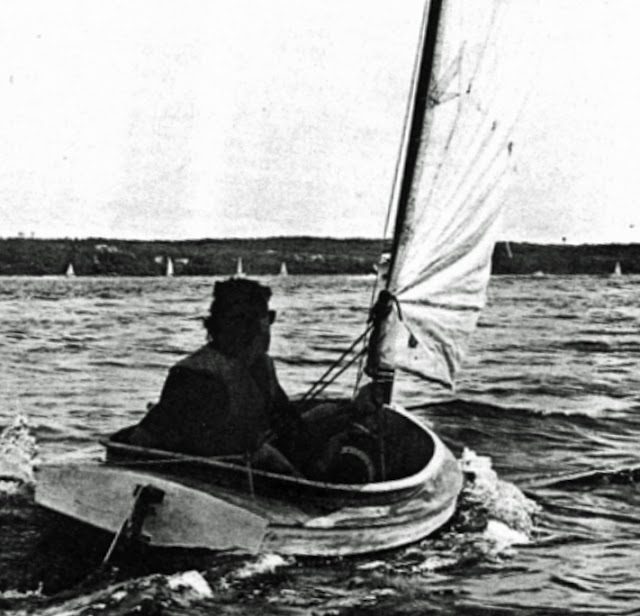 Designer Don Betts sent along this email, March 2018, filling in the details of the Pea Cat.


"I built the two of these little boats. I wanted little sailboats to keep on the beach. After building long thin boats that seemed to take a lot of walking up and back thought it would be fun to build something that could be built standing in place and spinning the boat around. The first boat has a centerboard, the second an off centerboard through the rail outside the coaming. The hulls are 1/8 plywood 4 ounce glass inside and out and both serviceable after more than 25 years of abuse and neglect. Fitted with oarlocks they have made ok dinghies, easy to carry up the stony beaches. The rigs haven’t aged as well. The drawings from Glen L Designs inspired the curve of the bow blending into a hard chines, The first boat has the chine up to the bow, but I realized each side could be cut from a single sheet of plywood. So redrew the pattern to form the shape from cutting the wedge shape to form the chine. There are patterns that I’ve sent to a few people that asked. The boats were a lot of fun but had some quirks that made me reluctant to share the design.
"The sailing pictures don’t tell the whole story, the boats were used mostly with two adults and a child, With two adults and both children the Pea Cats did not sail so well. Some of the memorable sails were out on the Hudson up near the Tappan Zee, and the East Passage of Narragansett Bay to watch the sailboat races. We knew the skippers of a few of the Herreshoff S boats and would sail out and along their courses close enough to wave. And they made good boats to sail the couple of miles around to the anchorage to see what boats were there for the evening. A more recent project has been a Providence River Boat, about the size and rig of Newport photographer Edwards Smith’s Kingfisher with the retractable bowsprit like his and the Button Swan in Chapelles American Small Sailing Craft.

Click here for a writeup on another micro catboat, the Bolger Queen Mab.

Posted by Tweezerman at 4:48 AM 3 comments

Email ThisBlogThis!Share to TwitterShare to FacebookShare to Pinterest
Labels: Micro Dinghy, Other sailing dinghies, Other singlehanders

Peter Kellog, owner of the sandbaggers Bull and Bear, brought his reproduction of the 1924 Sweisguth catboat, Silent Maid, to Annapolis to compete in the 2017 National Sailing Hall of Fame Classic Wooden Sailboat Rendezvous. Unless you see this catboat in person, it is really hard to fathom how big, how massive, the mainsail Silent Maid sets. I took several photos of Silent Maid before and just after the start of this pursuit race. Silent Maid went on to win the race. 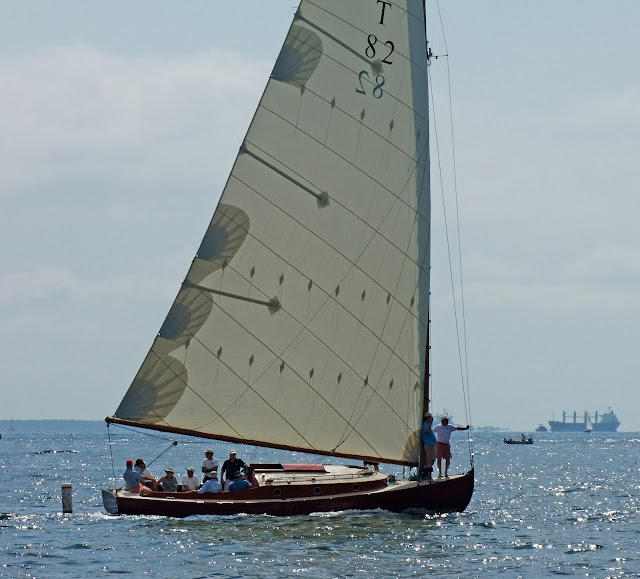 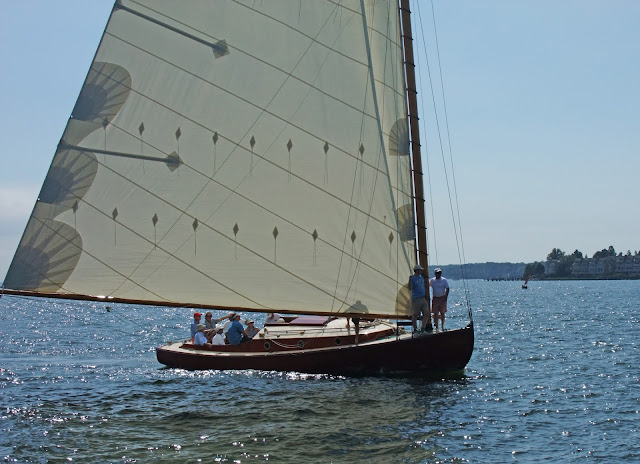 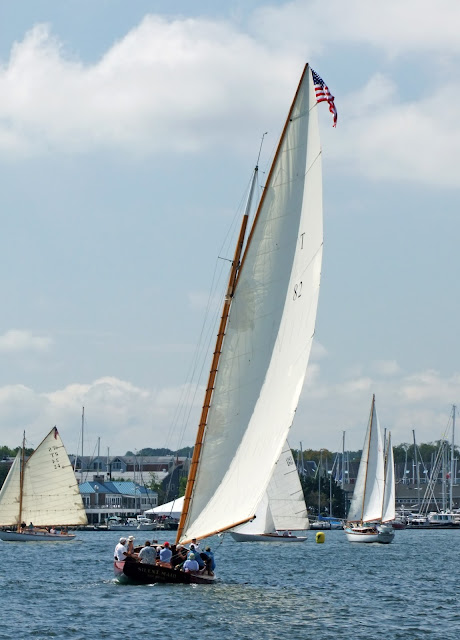 Before WWII, Silent Maid was the biggest of the cruising catboats competing in New Jersey waters.

Posted by Tweezerman at 4:24 PM 0 comments

Posted by Tweezerman at 4:31 PM 0 comments 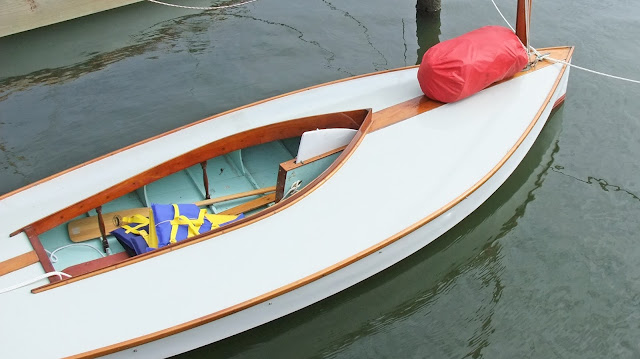 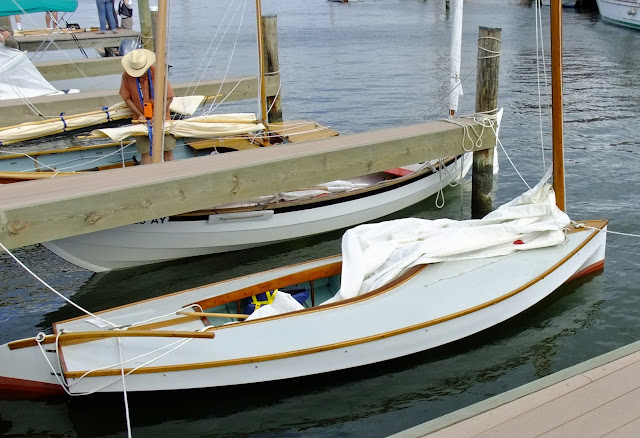 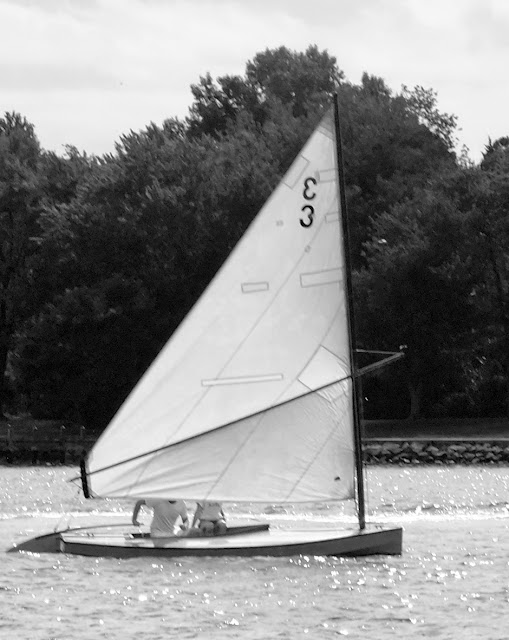 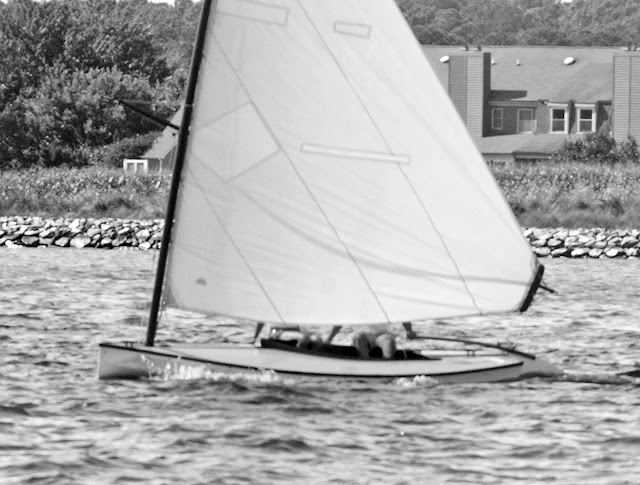 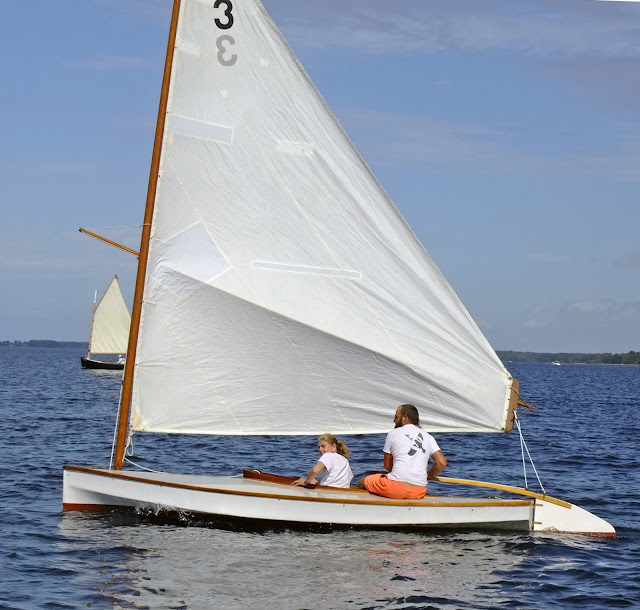 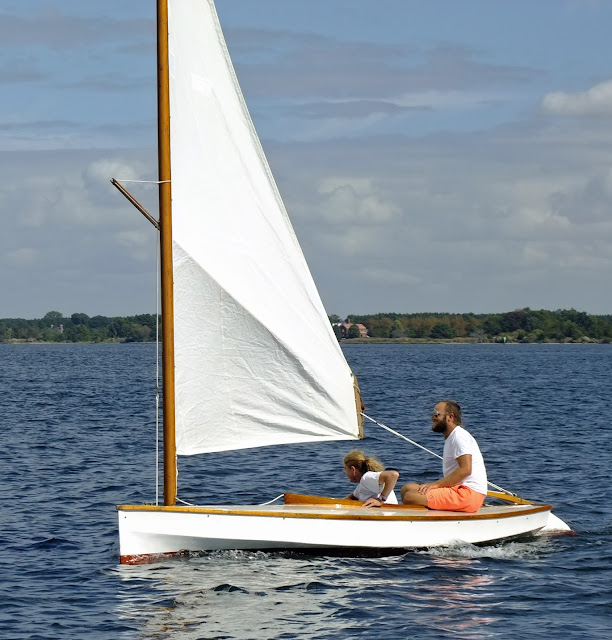 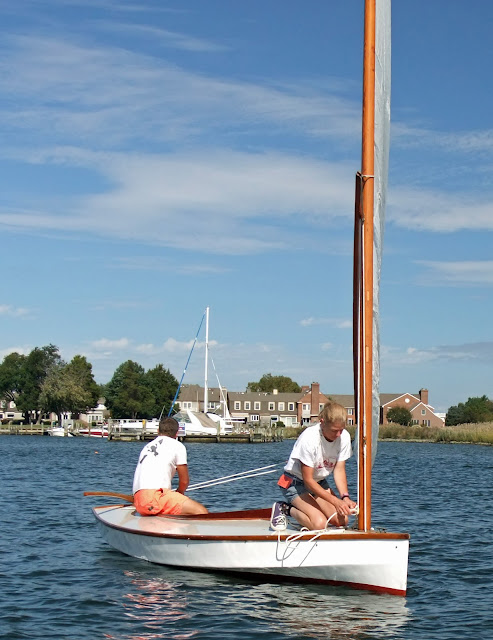 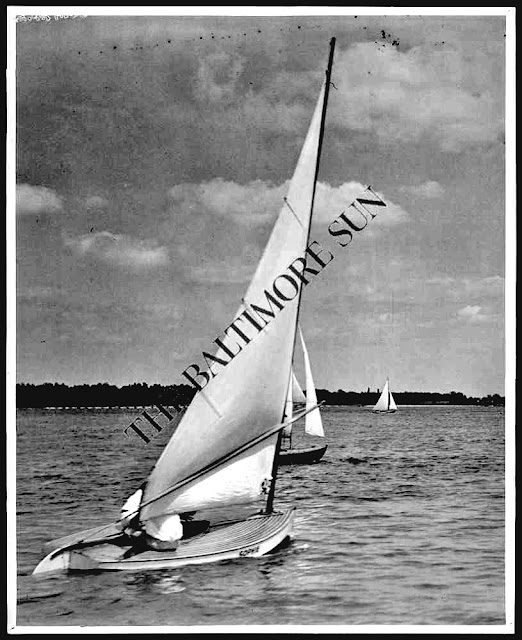 Posted by Tweezerman at 2:46 PM 3 comments

These couple of photos should wrap up my posts on the Australian Historical 18-footer visit to Annapolis.

The 1932 reproduction Aberdare rolled on her side. You can make out the moderate V section shape which is not too dissimilar to the section shape of the 1870 Sandbaggers (though every thing else on the hull shape is completely different). 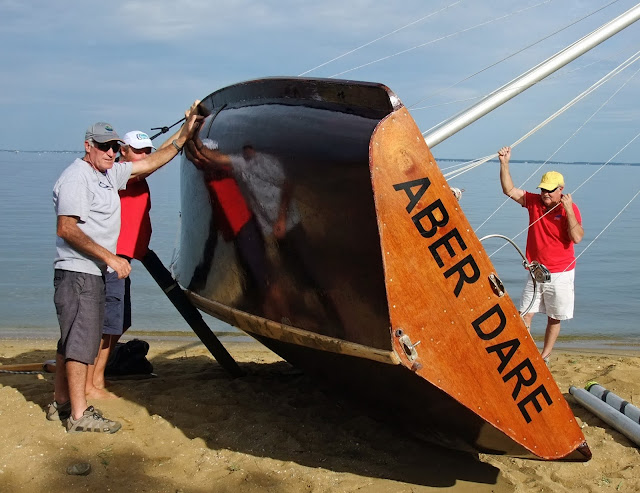 Australia IV before the mast went up. The reproduction 18-footers are cold molded in plywood with an outer layer of cedar. The originals were built single planked, bent nailed into interior seam stringers (batten seam construction). The reproduction hulls weigh around 270 kg (600 lbs.), which seems to be about 100 kg less than the original hulls. 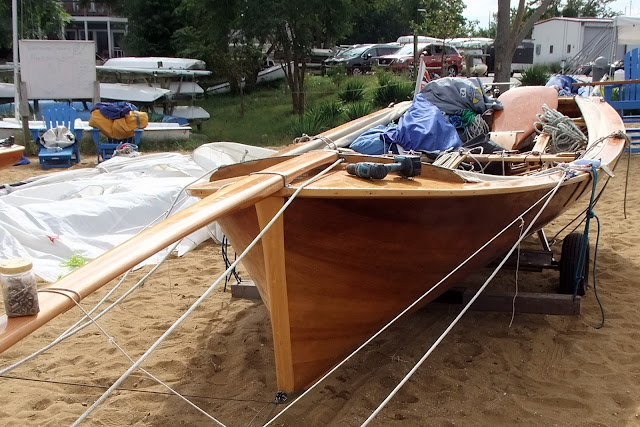 The daggerboards are simple metal plates. 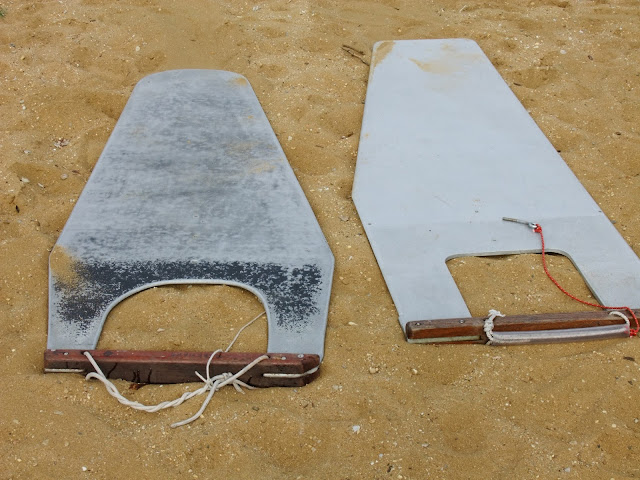 The two architects of the Australian Historical 18-footer visit; Lee Tawney of the National Sailing Hall of Fame and Ian Smith of the Historical 18-footer organization. Ian Smith has written a book on the old Australian 18-footers; half the book is a history, the other half a construction primer on how they were built. The blogmeister bought the book and can vouch that "The Open Boat" is well worth adding to your yachting book collection. 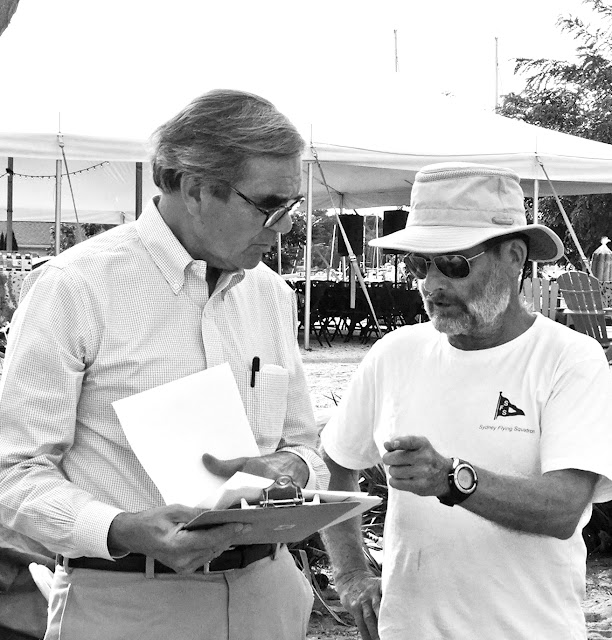 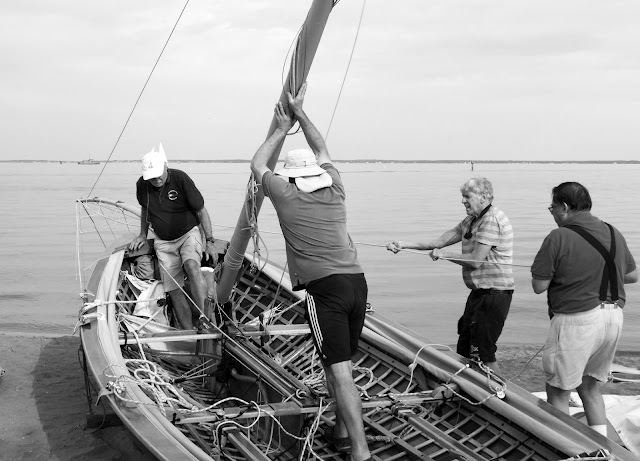 Posted by Tweezerman at 4:21 AM 0 comments