Music for Fridays Index thru end of 2009

Click here for the second Music Index from this blog.

This is an index of all the Music for Fridays selections up to now (with the exception of those who have had the videos taken down).

Posted by Tweezerman at 7:20 AM 0 comments

Holiday Wishes to all of You!

Posted by Tweezerman at 7:44 PM 0 comments

Email ThisBlogThis!Share to TwitterShare to FacebookShare to Pinterest
Labels: Americana, Music for Fridays

Though this blog is mostly dinghy-centric, I do have a soft spot for the occasional Classic keeler video.

Some great historical video of the St. Pete to Havana race from the 1950's.

And what looks like a delivery of a large traditional yacht in the Mediterranean (modern day).

Posted by Tweezerman at 4:29 PM 0 comments

Dodging the bullet..... until Saturday

Here in the Mid Atlantic USA, we've been in a very wet period. We've had a string of N'easters in December. These are low pressure systems, carrying a lot of moisture, that usually originate in the Gulf of Mexico and then track up the Eastern Seaboard. They are called N'Easters because the counter clockwise flow brings strong winds from the NE quadrant. In Annapolis, the N'Easters of December were dumping a lot of rain but leaving the snow in Pennsylvania or further north in Massachusetts. That is until this weekend! We got a doozy of a snowstorm on Saturday.

I wandered out early on Sunday morning. The light around daybreak was not really enough for movie making on my digicam. My sister who lives in the mountains above Denver would be scoffing at this puny snowfall (or even my sailing buddies up in New England); but for us in the Mid Atlantic it's a big deal.

Posted by Tweezerman at 7:06 PM 0 comments

Email ThisBlogThis!Share to TwitterShare to FacebookShare to Pinterest
Labels: Dodging the Bullet

Continuing with the theme of music videos with rich visual imagery; here is one with striking animation;

Gotye- Hearts A Mess from Gotye on Vimeo.

Posted by Tweezerman at 5:44 PM 0 comments

I came across this video of an old Lightning sailing off Mumbai (Bombay) India. The Lightning itself looks like a snapshot from the 1950's or 1960's; wooden mast, boom, shrouds lashed to eyes, though the sails look like more recent castoffs. It begs the question of the origin of this Lightning, a quintessential North American dinghy. How did she find her way to India? Was it imported by an American, perhaps State department? or businessman? Or was it built in India?

This crew have to play dodgem with very busy ferry traffic, all of them chock-a-bloc with humanity. Mumbai and it's surrounding townships are estimated to have around 19 million people, making it one of the most populous cities in the world.

My other post about Lightning sailing was also about an old wooden Lightning.

I was on RC duty at SSA late October for a bitterly cold and rainy Lightning regatta. I thought my old Line 7 foul weather gear would be up to the job but I was proved wrong.
Posted by Tweezerman at 5:12 PM 0 comments

Picked up from Boingboing.net , another celebrity endorsement of Raisin Bran Crunch.

Posted by Tweezerman at 5:21 PM 0 comments

Email ThisBlogThis!Share to TwitterShare to FacebookShare to Pinterest
Labels: Humor

I've got to descend into low brow every once in a while;

A techno beat about sperm fighting over egg? There is one on YouTube! Sperm in Water Polo hats and dress suits........ classy.... and the face and ass that launched 80 million sperm...Wowee!

Hey wait.... why didn't the blond hair, left handed sperm win out... Oh right, he didn't have the flippers!


And with that video, I just can't pass up the most hilarious Woody Allen segment on SEX ever!

Mission Control, we have Sydney the Stud, but lets give a ton of recognition to those hard working guys in the hard hats, knee deep in water!
Posted by Tweezerman at 3:51 PM 0 comments

Email ThisBlogThis!Share to TwitterShare to FacebookShare to Pinterest
Labels: Humor, Music for Fridays

We have a cold rain falling tonight. About 40 miles to the West, in Frederick, it's freezing rain. Temps this weekend will be just above freezing. Time for some videos from someplace warm, with blue skies, green waters, everybody in shorts and dolphins cavorting under the bow. A well made video of the Belize working wooden craft...............

Posted by Tweezerman at 7:01 PM 0 comments

When I did the post about scow Moths, I linked a video from marakurasailing . The sailing waters looked spectacular, with the sailboats racing against the backdrop of the surrounding snow covered mountains, so much so that I did some Internet research. The Marakura Sailing Club is based at the south end of Lake Te Anau , deep down the South Island of New Zealand. The lake abuts the Fiordland National Park.

From Iain Campbell, Commodore of the Marakura Sailing Club;

Marakura Yacht Club is one of the more southerly clubs in NZ. we have a membership of just over 100 of which half is very active and the rest is made up of social members and casual sailors who turn up as work and family commitments allow. Sailing on Lake Te Anau can be a cold affair at times. our season runs from september to late april and the lake temp ranges from 8 to 10 Celsius in the early part of the season to 15 in the warmest part.

There are a wide range of boats within the club ranging from optimists and p-classes that the kids sail and lasers, hobies, and paper tigers through to a variety of trailer yachts. most of the racing takes part in the bay area directly in front of the club which is located just metres from the lakes edge. there are races however that go up into some of the more remote parts of the lake.

The lake itself has a shore line of nearly 500km and has a large number of extremely remote areas reaching out into the mountains of fiordland national park. If anyone is coming this area from anywhere else in the world they are most welcome to contact myself via youtube or direct through the clubs email address which is iain@marakura.org.

Well, if I ever make it to NZ, Marakura Sailing Club will be tops on my list.

Another video from Iain;

Posted by Tweezerman at 6:27 PM 0 comments

I almost forgot. The Mint has the prettiest sheer line of any Classic......... 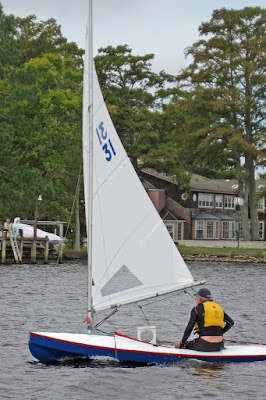 End of the season and some of the Classic guys are clearing out their overstock.

Classic Moths for sale can be found here . Just go to the left side pane, click on the "For Sale" link to get the latest listings. 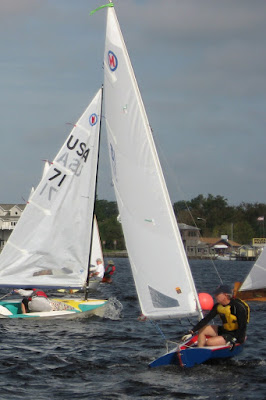 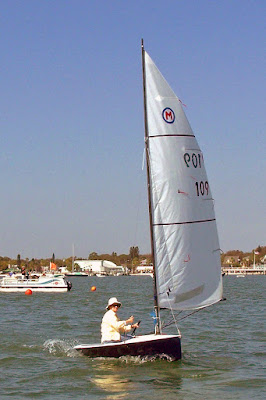 Posted by Tweezerman at 7:20 PM 1 comments

I'm turning "Music for Fridays" over to my daughter Robyn again, this time with her own commentary as well.......... Enjoy!

You know when you win at digital solitaire and the cards start this painfully slow yet trippy spectacle bidding you adieu? They fall one by one, leaving a cascading path that eventually fills the screen with thousands of cards until the Ace of Spades finally drops, and you realize you spent close to 10 minutes watching cards fall down on a computer screen. I watch it every time though. This video from OK GO (of treadmill fame) reminds me of that....Robyn

This blog not responsible for any latent LSD flashback episodes!
Posted by Tweezerman at 1:39 PM 0 comments