Run Up to the Weymouth Olympics - U.S Womens 470

The 2012 Summer Olympics in "Merrie Old England" is just over a month away. I'll be featuring some Olympic Sailing videos over the next month. First up is the U.S 470 Team, Amanda Clark and Sarah Lihan.

Team Go Sail London 2012 from 5K Productions on Vimeo.
Posted by Tweezerman at 6:19 AM 1 comments

Race Committee and a Coaching Tip

This is one of those years where I've served on Race Committee before I've actually got one of my boats out sailing (hopefully before July 4th - I'll let you know).

Not that I'm complaining. It's not all work, work, work for Race Committee. In watching bits and pieces of the races we always hope to derive some amusement from the dinghy racers, those screw-ups, yelling, near-collisions (nobody likes to see real collisions). Well that weekend, the Johnson 18 fleet was up to the task of amusing the Race Committee - almost to a man they refused to take their spinnakers down until they were abreast of the leeward mark, which resulted in much flailing, boats turning upwind with jibs half out, poles not retracted, this all happening usually at a great distance downwind from the leeward mark. One poor fellow who made a complete hash of it, sailed way out of the three boat circle, reentered it going upwind, only to meet a fellow competitor who had been behind but had done a better job of rounding. Fortunately no collisions but the rule implications on having someone exit and then reenter the three boat circle makes the rule experts giddy with analysis.

I was thinking of wandering over to the Johnson 18 area of the dinghy park after the racing and mentioning how to correct this, but then I thought better of it; nobody wants a Mr. Know-it-All interrupting the post race drinks. Wait a minute, I have a blog - I can offer advice from afar (but should I?, spinnaker screw-ups are always a good source of merriment on the Race Committee.)


Start taking the spinnaker down far enough away from the mark so everything is tidy and shipshape when you enter the three boat circle! Figure out where that needs to be given your experience. Start taking the spinnaker down at say 8-9 boat lengths and as you get better tighten this up (or if you still can't shave around the mark with everything percolating, lengthen this out).

Posted by Tweezerman at 6:04 AM 0 comments

Tillerman put out a request for photography tips for bloggers and got lots of great answers.

I can't add much that hasn't already been offered up as advice. I am mostly a consumer of photos; I use what photo's people send me or the photo's I can troll for online. I do own five digital cameras of various ages, makes and models; the most expensive one was around $300 in cost, but I usually don't remember to carry them. I have become reasonably adept at fixing photo's, my favorite software being an older version of Adobe's Photoshop Elements, their "Fix Everything" button does an amazing job.

I do have two tips:

Email ThisBlogThis!Share to TwitterShare to FacebookShare to Pinterest
Labels: Tillerman

I've been promising Earwigoagin's European correspondent, Romain Berard, to do another post on his yacht for over a year now. You see, Romain owns a wooden International 12 and has supplied me with several photos, one of them now gracing the header of this blog. The International 12 is one of my favorite classes; certainly if I was based in Italy, where it is very popular, I would own one. I've posted several times before on the International 12 at the following links:

Last fall I talked to Louis Sander of Ronstan at the U.S Sailboat Show. He is based in Italy and the conversation turned to the International 12, which, it turns out, is known simply in Italy as the "Dinghy" class. Louis said it is very popular in Italy (I notice online that they get fleets of 70 for big regattas in Italy) and, according to Louis, is based around Portofino/Tigullio, with the other most active fleets around Lake Como, and in the Veneto and Lazio regions.

Next year the International 12 will be 100 years old; without question it is the most popular vintage dinghy going. It is built in wood and glass and retains the original lug rig, though the racing types have completely modern blocks, lines, and Dacron sails.

A pic I lifted online, taken by Pascale Guittonneau of an International 12 sailing in a French vintage regatta. Very pretty lapstrake hull (clinker to those from England) with a very round hull shape. Sailing these craft can be tricky. Romain sent me a video of his boat sailing downwind in a breeze - rock and rolling all the way. 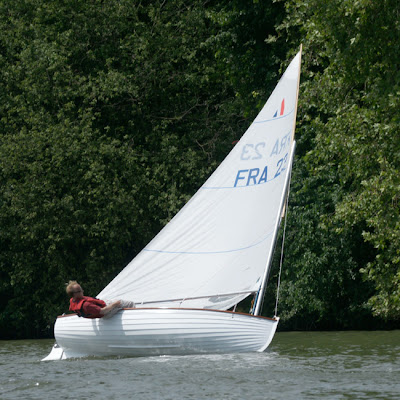 A YouTube video. The title screen, a disclaimer roughly translated from Italian by Google....

"The video was shot while I was making a photo shoot and it is not representative 'of the event, or of my work. These are only images to share with friends "dinghisti." Camera images are attached to the dinghy of Nicola Rainusso."


Bloggers Note: For those who have raced singlehanders, the onboard video at 3:25 into this YouTube is amusing. Apparently the skipper, in attempting to gybe around the reach mark, lost control, rounded up head-to-wind (as usually happens) and ran into the poor fellow who was following behind.

Posted by Tweezerman at 5:49 AM 5 comments