Drone Video of the A-Scows Racing

For some reason my favorite drone sailing videos are the ones filming the American scows - (there is more Over here ). This video features fleet racing in the big monster ILYA scow, the A's.

Email ThisBlogThis!Share to TwitterShare to FacebookShare to Pinterest
Labels: Scow

From left to right; Derek Dudinsky in a Mousetrap/Mistral, Bob Patterson in a Duflos, Greg Duncan in his modified Mistral.

Posted by Tweezerman at 1:48 PM 0 comments

We looked at Groupama's foil control setup; here is the wrap up video of the actual final match racing for the C-Class LittleCup.

The 2015 Classic Moth Nationals at E-City this past weekend had two glorious sunny days with winds mostly under ten knots. Jamey Rabbit repeated as National Champ with an even more dominating performance than he had last year. As usual, the Gen II Mistral or modified Mistral designs filled the top four positions. Rod Mincher returned to the Nationals after a several year layoff to take the Gen I division in his Maser. Gary Gowans, who won Gen I last year, copped another victory this year, in the Vintage division.

The fleet was split almost evenly among the divisions with 6 Gen II, 5 Gen I, and 6 Vintage to make a total of 17 Classic Moths.

I was able to wander around and take some yard shots of a few of the Classic Moth fraternity/sorority.

Usually the Classic Moth Greybeard Society doesn't have a quorum at the Nationals but this year they did. Dan Mallott, Gary Gowans, and Jahn. 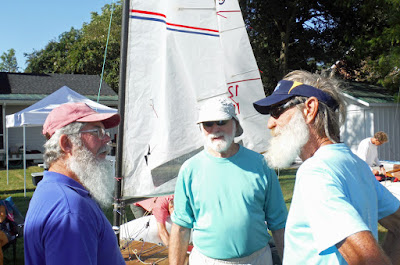 Bill Boyle, who was the lead builder on the Tweezer project, has built or restored a bunch of Classic Moths. Here he is with his restored Ventnor. 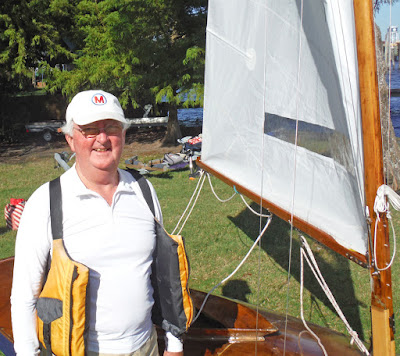 Joe Courter, who puts on the great pre-race party at the Brigantine Regatta, got the Old Goat award (he's well into his 70's). 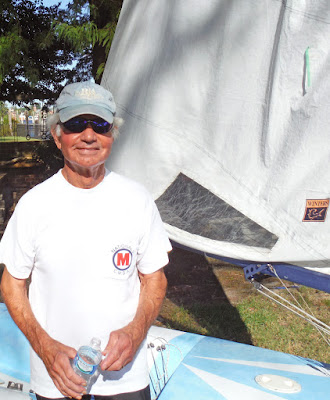 National Champion for the second year in a row, Jamey Rabbit, 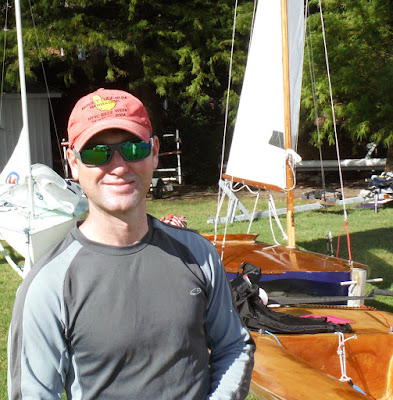 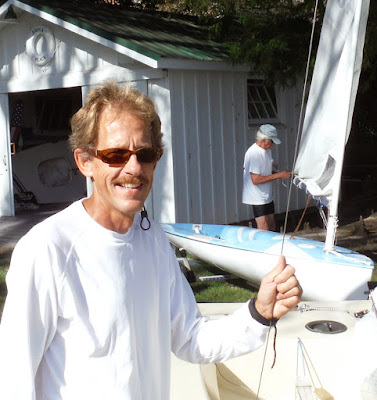 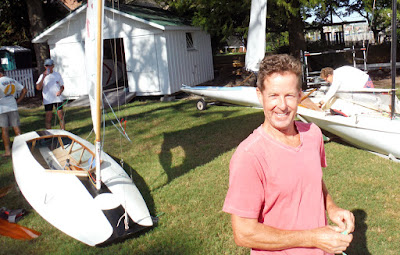 George Albaugh over at Mid-Atlantic Musings blog has put more photos up in his 2015 Nationals photo album.

Posted by Tweezerman at 5:52 AM 3 comments

Put the board down! No! Sideways! No! Way Forward!

On my Classic Moth, I put the daggerboard down when going upwind, pull it up offwind. I might pull it up slightly going upwind in a breeze, but that's not very precise, just a yank before I go upwind. Sometimes in my dotage, I've completely blanked and forgotten to pull the board up until I'm half-way down the leeward leg.

Contrast that with the professional sailors, technologists, and builders on Team Groupama C-class catamaran (who just won the 2015 Little Cup, the Cup formerly known as the Little America's Cup). Groupama have so finely honed their foiling on their 2015 model C-class catamaran, competitors figure they now have a two year technology edge on the competition.

A very basic primer on how to control the foils on Groupama. There will be a quiz at the end of class. There will be bonus points if you can explain the function of the wooden wedge in the operation of these foils.


Daggerboard kant and rake systems on Groupama from Turtle Danger Productions on Vimeo.

Posted by Tweezerman at 2:13 PM 4 comments

Sometimes when dinghies go fast they sing to you, as is the case in this video of a 14' Javelin class at speed on a long spinnaker reach. Originally designed by John Spencer of New Zealand as a follow-on to his 12' Cherub, the Javelin is a development skiff design, single trapeze with a moderate rig. The Javelin remains an Antipodean class, raced in Australia and New Zealand.

Posted by Tweezerman at 4:41 AM 9 comments

Click here for information about CRAB (Chesapeake Region Accessible Boating).
It somewhat pains me to admit this, but I've done more keelboat sailing over this past summer than dinghy sailing. I've been volunteering at CRAB (Chesapeake Regional Accessible Boating - my long time sailing friend, Dick White, is sailing director there) and I've been kicking around the Bay with various groups in CRAB's keelboats, the Freedom 21's, which were designed specifically for handicap sailing.

The blogmeister had to make a singlehanded delivery of a Freedom 21 from the home-port of Sandy Point State Park down to Annapolis (the Freedom 21's were sailing in Boatyard Bar and Grill fundraising regatta off Annapolis that Saturday). I took my trusty pocket waterproof camera and shot a very short video of the 6-7 mile jaunt (including selfie).

I was delivering the Freedom 21 down to Annapolis for the annual Boatyard Bar and Grill fundraising regatta, where, as it turns out, US Sailing had decided to feature this years regatta, and CRAB, in this well done video.

Posted by Tweezerman at 4:06 PM 3 comments

The previous header photo was of a classic International 14, circa late 1960's. (One clue is the crew isn't using a trapeze which didn't get voted in until 1969.)  This is a Canadian 14 as it has the Canadian registration numbers on the bow. Design? I'm guessing Proctor V or VII given the bow rocker profile. (Yes, you could say I'm somewhat of a International 14 history geek, though, to be honest, I grew up with these boats.)

More classic International 14 material can be found on my companion blog.

Posted by Tweezerman at 3:47 AM 2 comments

Over the years this blog has featured some of the oddball regattas/sailing races where you take your oddball small sailboat and compete against a bunch of other oddball small sailboats. During the fall season there is enough of these events you could, if so inclined, hop-scotch up and down the East Coast of the United States.

They are (in roughly chronological order):


A one race jaunt around Jamaica Bay. I'm sure they would be delighted to see some out-of-town visitors and been told, even though this is Brooklyn, there is plenty of parking around the club. See comments for more info from SCC members.

SEBAGO CUP ----- September 19, 2015
Our annual cruising race!
This is an open class cruising race open to non-members. Fleets will be created upon the participation of at least two boats of the same class. Contact sailing@sebagocanoeclub.org for more information.
Skippers meeting - 11:30 am
Starting gun - 12:30 pm
Notice of Race
Sailing Instructions


A one-or-two lap race around the Annapolis Harbor. The majority of entrants are classic cruising keelboats but there is always a smattering of small boats. This year John Z is entering his Classic Moth.

This is more of an event than sailing race but there is, on Saturday, a one-lap sailing race in the river starting around noon that is quite a hoot. I have done it twice in my Classic Moth Tweezer where I was racing in a division featuring a motley assortment of larger craft including Thistles, Core Sound 17's, Blue Jays, Celebritys, log canoes. 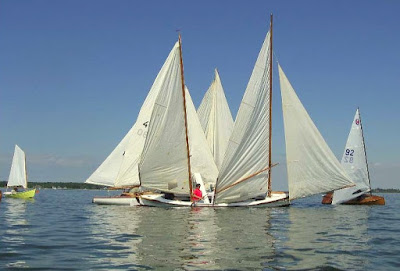 Hosted by John and Polly Hanson. This is a small affair, hosted out of their lake-front cabin around the time of Maine's fall foilage.


Archipelago Rally - early-November - Somewhere in the state of Rhode Island.

In a twist on normal advanced scheduling, the organizers wait until about two weeks before the event before announcing the location. A one lap race, usually going around something.

Posted by Tweezerman at 4:41 AM 4 comments

The Internet bombards us daily with the inspiring, the feel-good pluck of the underdog, the gritty - so much so that we sometimes become inured to it all. Despite the overload, this particular video of the U.S. Womens Skud 18 paralympic team manages to resonate the naked courage it takes to move forward in the wake of a disastrous, paralyzing injury or sickness. This is one part of a well-done series of sailing videos sponsored by Sunbrella - the manufacturer of cover materials.

Posted by Tweezerman at 2:10 PM 3 comments