One Hundred Years: The Boys of the Genesee Dinghy Club

One hundred years ago, on this day, May 30, Decoration Day in the United States (the precursor to Memorial Day), the racers of the Genesee Dinghy Club started their 1915 season in new digs. They had moved east across the Genesee River to Summerville, a lakefront suburb of Rochester, New York. Their little club of dinghy lockers was now sandwiched between Popp's Inn and the U.S LifeSaving Station, just off the beach.

It would be a good move. Launching from the beach was now mostly protected by the jetty that extended out from the Genesee River. If Lake Ontario turned too gnarly, racing could be pulled under the jetty as well. The club would grow their fleet of Genesee Dinghies over the next five years to about twenty with ten to fourteen making it to the starting line on any one day.

The Genesee Dinghy was twelve feet long, about five feet wide, a cat boat, with a low aspect gunter rig of around 90 square feet. It originally started off as a copy of Toronto's 1898 Morse dinghy but, as a development class, it quickly morphed into a different craft. The Genesee Dinghy was raced singlehanded, a true novelty in the early 1900's, and they raced on open water, another novelty, but also considered extremely foolhardy for the dinghy racer of the early 1900's.

By 1915 Canada was already enmeshed in the Great War and America was two years away from joining the fight. At least two of the Genesee Dinghy Club members were to fight on the Western front.

From the Emerson collection, here is a photo montage of some sailors from the Genesee Dinghy Club - America's first die-hard dinghy racers. 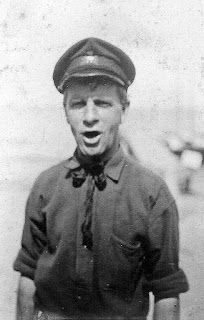 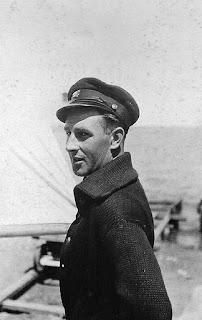 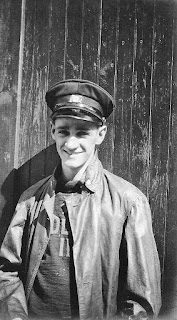 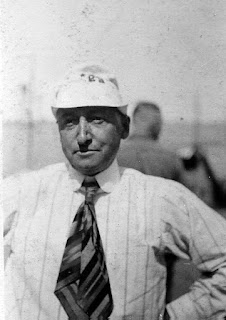 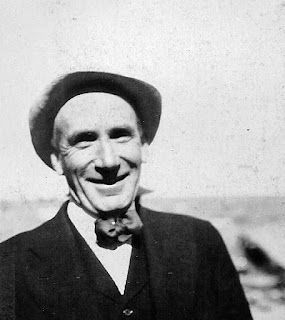 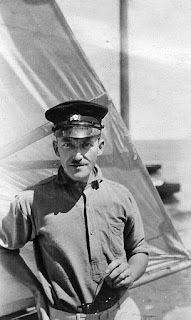 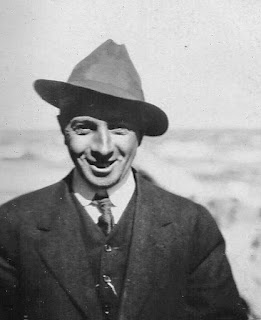 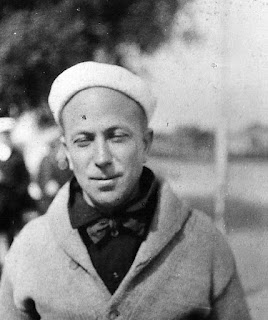 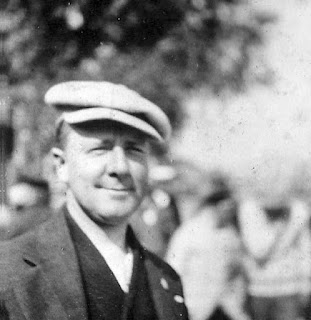 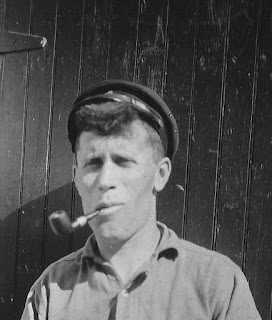 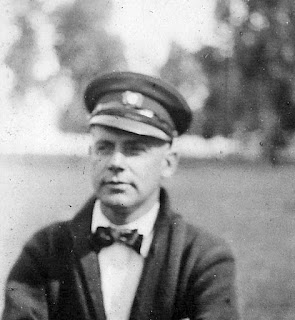 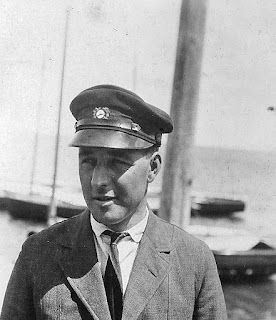 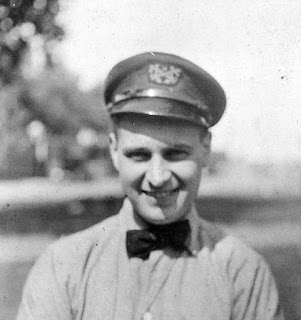 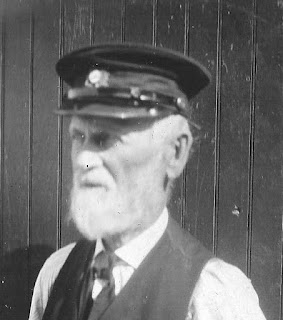 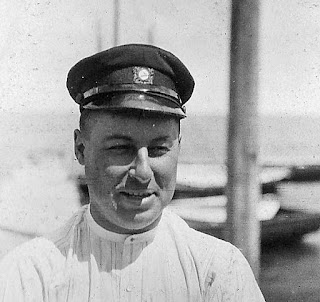 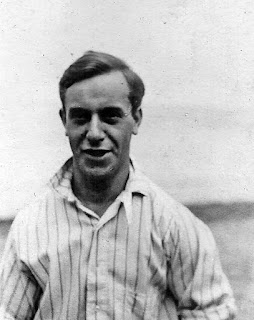 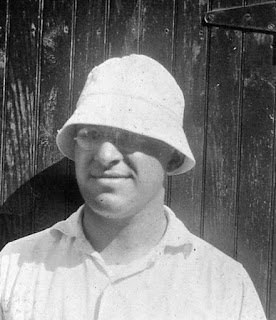 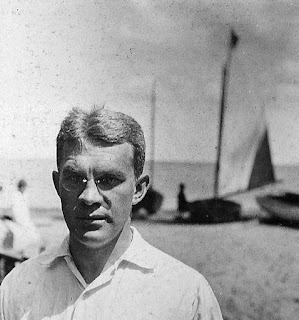 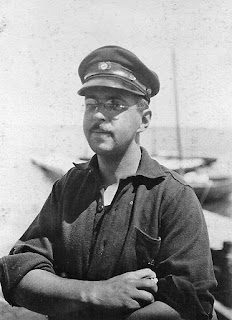 Posted by Tweezerman at 7:17 AM 5 comments

The previous header photo was of the reproduction Philadelphia tuckup, Marion Brewington, built by the Independence Seaport Museum. I lifted this photo from the Green Boats blog which unfortunately went dormant two years ago.

The Philadelphia hiker and tuckup were America's first racing dinghies. Racing these catboats on the Delaware River was going full bore in the 1870's (which indicates that it was developing in the 1860's and maybe earlier) and continued to the early 1890's, when expanded commercialization of the Philadelphia waterfront shut down the tuckup yacht clubs and their boat houses. Following the lead of the sandbaggers, the unlimited hikers had ridiculous sail plans, carrying cat rigs up to 450 square feet. The  Marion Brewington is a fourth class tuckup which had reduced the sail area to a more sensible 177 sq. feet (but still on the overpowering side in modern terms), set on a gaff rig on a hull of 15 feet in length. The fourth class tuckups were normally crewed by two. The two hull lines of tuckups that have made it to the present day, the Thomas Seeds and the Spider, are both fourth class tuckups

Ben Fuller put together a very interesting history of the hiker and tuckups in issue #148 of Woodenboat, pages 46 through 53. Well worth a read if you can get hold of a copy.

The famous and somewhat controversial American painter, Thomas Eakins, painted the hikers in his well known Sailboats Racing on the Delaware (1874).

Posted by Tweezerman at 6:32 PM 0 comments

Music Whenever: "Take On Me" - Seven Handle Circus

One of the small cadre of readers, who actually likes my music posts, requested I put up another one. Since I get few requests for anything on this blog, I am happy to oblige.

Here is a well-done, with the band having a lot of fun, acoustic cover of the a-ha song "Take On Me".

An ad on this blog?

Well sort of... I thought this video put out by Vaavud, a company the sells anemometers for smart phones, is worthy of a repost, particularly since it has two Lasers bombing back and forth. Unfortunately, I'm a fossil; I only own a flip-phone and have resisted carrying any smart technology. I have no knowledge of the performance of the Vaavud anemometer. My experience with hand-held anemometers, when using them on race committee to determine whether we have the required 4 knots wind speed to race, is they are somewhat dicey in their accuracy at low wind speeds. Maybe some of those technically hooked-in with modern devices could comment on the smart phone anemometers.

Posted by Tweezerman at 4:00 PM 3 comments

George Albaugh, fellow blogger and Moth class keeper of plans, kindly lent me the Florida Cates Classic Moth plans to look over. Jeff Linton got his start in the Classic Moth class in a somewhat tired fiberglass Cates and just recently, Gary Gowans, shown in the photo below, won the Gen I division in the 2014 Classic Moth nationals with his home-built modified Cates.

George provided more details on the history of the Florida Cates Moth in the comments section, which I have dragged over to the main post:


"Warren's 1954 World Champ boat was Mach One, NOT Mach Two. After Harry Cates modified the design of Mach One to make the boat easier to build and less tippy, Warren ordered one from Harry and named that particular boat Mach Two. The modified boat is alternatively referred to as a "Cates" a "Florida" or a "Mach Two" design, depending on whom you're taking to and to an extent where you are geographically up and down the eastern seaboard.

"As a footnote, only a handful of Mach One type Moths were built. The Mach One has more keel rocker and a much deeper vee. This makes a Mach One type almost as evil to sail as a Mistral. This also means that the bow sections on the Mach One have to be pulled up pram style rather than planked as in the case of the Mach Two/Cates/Florida derivative. Warren's Mach One had a false nose, made of fiberglass, glued on the front of the hull to achieve the sharp stem seen in most surviving photos of the boat.

I scanned parts of the plans and was also able to convert the Florida Cates lines into an 8-station offset table incorporating Gary Gowan's wider transom. I've made up a small PDF file, which, while not the complete plans, gives you the flavor of how they built this 1950's design. If you were an experienced builder, you could probably make something out of this PDF. If not, contact George for the complete set of plans (see PDF).

To print or download this PDF, click on the right-facing arrow icon on the top right of the PDF window. This will open the PDF into another tab.

Posted by Tweezerman at 9:53 AM 8 comments

Re the Melges 14: Melges Perfornance Replies

When you tweak a company just a little - like I did in the post Melges 14 Vaporware?, it is only fair to allow the company to reply. So I emailed Melges Performance and Andy Burdick replied that they are indeed producing the Melges 14:


"We were early on our showcasing of the Melges 14 at the Chicago Strictly Sail Show. We have had such a response on the boat though that we felt as though we need a boat on display for people to see. The response was fantastic. After over 2 years of testing, tuning we feel like the Melges 14 is a great boat for one-design sailors but also for people that just want to go out and enjoy the sport of sailing. The Melges 14 is fast, modern, well built and has the ability to take a child or friend with you for a sail. Exposing people to the sport we love. Melges is excited about the future of the Melges 14. Excited for singlehanded one-design sailors and excited for the aspiring sailors that want to just go out and have fun.

Since January we have been building and distributing new Melges 14's. We have a container of boats headed to Europe soon, we had our first boat go to California yesterday. Boats are being sprinkled around the county with anticipation of further excitement.

We have been pretty "nose down" here in our boat production due to the popularity of our other one-design classes. We build 10 one-design classes now. Thus, through the winter and spring we have been working hard at getting our boats built and complete for spring deliveries.

Once we free up the current build schedules we will be more mainstream with the pushing and marketing of the boat. This is coming soon, real soon!"

There you have it. You can order a Melges 14 at this very moment. Melges Performance will build it. For the present it looks like they are depending on those "early adopters" to market the Melges 14 with Melges putting their corporate clout into more concentrated advertising and class organization of the Melges 14 later in the year, after they get through the busy spring boat building season.

On a slightly different note, but still involving Melges Performance, I realized two days after making this comment in my post about Retro Singlehanders:

- that I had got it wrong. The retro MC Scow, has slowly but surely - mostly under the radar - become a national singlehander class in the U.S.. Mea Culpa. This seems as good a time as any to correct the error.

To most of the world, the MC Scow, at a length of 4.9 meters, a weight of 190 kg., and a sail area of 135 sq. ft. is a big hulking SUV of a singlehander (some may question whether we could correctly identify the MC Scow as a singlehander as you are allowed to take a hiking crew when the breeze is up). Nonetheless, it has become very popular in the U.S. with fleets springing up well outside the normal Midwest scow territory. My good friend, Bob Blomquist, is now racing one out of Sarasota, Florida. Following is another well done video promo for the Melges MC scow (looks to be done by the same guy who did the Melges 14 video).

The Melges MC from Nick Bowers on Vimeo.

Enough about the Merry Finnster on Lake Garda - how about the world's most popular Classic Moth - the Europe Dinghy. One of the top Swedish Europe Dinghy sailors put together this intriguing travelogue of the 2015 regatta on Lake Garda, with plenty of hand-held GoPro planing shots, plenty of spray everywhere, all set to the appropriate bombastic music score. Sit back, pull out a beer or potato chips - your choice - and enjoy!

Posted by Tweezerman at 5:22 PM 6 comments

Melges Performance replies to this post....
A couple of months ago there was a flurry of sightings of a prototype Melges 14 on the water and at the Chicago Boat Show. Since then, not a peep about the Melges 14, at least not that I can tell sitting here on the East Coast. Anybody know if Melges is going forward with production of this singlehander?

No matter what the timeline is (or not) of the Melges 14 actually emerging to the market, they did put out a very nice promotional video, complete with drone footage:

Melges 14 Promo from Melges 14 on Vimeo.

Posted by Tweezerman at 6:40 PM 2 comments