Blogger Brother Baydog reached the 100K viewer hits this past August, about the same time as Earwigoagin hit 100k (100,000 for you who where k means nothing except k). This is very small potatoes in the sail blogging world (though I must admit Baydog did it in one year less than Earwigoagin - which proves food trumps sailing every time).

I too did some poking around the Internet when Earwigoagin hit this milestone and determined;

(Both Joe over at Horses Mouth and I can take solace that we have somewhat more popular web presence elsewhere...and with a lot less work.)
Posted by Tweezerman at 6:24 PM 1 comments

Last winter the open sailing canoe guys (well mostly one gal, Marilyn Vogel) asked me to jot down some thoughts on sailcloth for sailing canoes for their newsletter (in my varied professional career, I have been a sailmaker - though not at the present time). The main issue I was asked about for the open canoe class was their rules referenced a now defunct sail cloth (hence the section on Bainbridge cloth). Though most of the small boat sailors out in the bloggosphere sail one-design boats where they don't worry about the type of sailcloth they are putting up the mast (alert, alert, technical data to follow, ignore if you don't care), there may be a few out there who have some interest in options for small boat sails.

Header Photo is from Earwigoagin's European correspondent, Romain Berard, and features two traditional International 12's (design circa 1914) drifting on some lake that, for the moment, I don't have the name (will have to wait for Romain to add a comment). My last post on the International 12 and Romain can be found over here.

It took a couple of days (my European correspondent must still be on his month long August vacation) but Romain comes through (see comments). It is "Lac des Settons", and from Google satellite, a very pretty lake indeed, set smack dab in the middle of France amongst the farms. Pinpoint maps from Google at the following URL:

Amidst all the hullabaloo about the Olympics, lost in the jingoism noise of Olympic sailing supremacy, was the remarkable 50th anniversary regatta of the OK Dinghy Worlds, the OK being the  equivalent of the Laser singlehander before the real Laser showed up in the early 1970's. The OK's are still doing very well worldwide, thank you very much, (doing well except in North America where the Laser eradicated any popular singlehanders that preceded it - except for the Sunfish). The OK has been called  the mini-Finn but it was really much more than that, the chine hull was designed for easy home building and at 150 lbs. hull weight the OK Dinghy was a much more lively experience than the stolid Finn dinghy (particularly in the 1960's, this was a very light weight for a singlehander).

In the late 1960's, the hotbed of North American OK Dinghy racing was on the West Coast. It was the young, hot-shot class with names such as Rick Grajirena, Steve Toschi, Dave Klipfel from San Francisco and Craig Thomas, Carl Buchan from Seattle. I  spent  an enjoyable hour or two with the West Coast OK bunch, apres-sailing, at the 1969 CORK regatta in Kingston. A very hippie-ish affair, as was always the case when you ran into the West Coast sailors during the 1960's.

The OK never caught on in the East Coast. I got to sail one once in light air, nice sailing experience, but I must admit that I followed the crowd and joined the BORG back then and spent several fun years flogging Laser #549 around race courses.

The OK dinghy was designed in Scandinavia and for the 50th Anniversary Worlds they returned to Vallensbæk, Denmark, over 145 strong. It turned into a light air regatta and geezer skippers abounded (New Zealand pre-geezer Greg Wilcox took second). It does seem that when you add a traveler and a slightly more tune-able rig, the older set can certainly crack the front every so often.

Here is an interesting time-lapse video of the 145 or so OK's returning home to their dolly's and good Scandinavian beer at the 2012 Worlds. The smallish club seemed to handle the returning hordes with aplomb. Long live the OK Dinghy!

Email ThisBlogThis!Share to TwitterShare to FacebookShare to Pinterest
Labels: Other sailing dinghies, Other singlehanders

Why sailing is not long for the Olympics!

I lied. I said I would watch the online feeds of sailing but the NBC Olympic website didn't seem to like my FIOS password so I was just as happy to watch the regular broadcasts of team handball, field hockey, water polo and like wacky Olympic sports.

I did check the Olympic sailing results daily. Not good for the USA team but, hey, this might be fodder for a later post (everybody and his mother in the bloggosphere have jumped on this one - why not me?). This post goes beyond USA mediocrity; this post, on why sailing should be booted from the Olympics, was triggered by two Web events;

But sailing is not long for the Olympics because it is not a spectator sport... period. Fleet racing will never be a spectator sport because the masses that give BBC and NBC and the IOC the TV ratings will never understand sailboat racing. I equate watching fleet racing in sailboats with watching a marathon organized on the Rosie Ruiz rules. You will start at one place, after that you may run off where you want to, hither and yon, and at the 25 mile mark you assemble in some order to finish. One can argue that the latest video technology, where we can view animations of sailboats racing and where we can draw imaginary lines showing who are the leaders and who are the followers even though they are often widely scattered about the course; all this makes sailboat racing more understandable to the Average Joe. What other Olympic sport do you need video animations to make it understandable as to who is winning and who is losing?

Now for Exhibit B. If you bought tickets to the Weymouth Oympic Sailing competition you were allowed up on a hill on the shoreline that supposedly had the best view of the racing courses. So lets say you bought some tickets to watch the exciting medal race of the Women's 470 class. Oops, we forgot the binoculars. What exactly did I get for my money. Lets go to the videotape (as local sportscaster George Michael used to say).


Though it pains me to say this; it looks like kitesailing, which is about as far away from typical sailboat racing as you can get and still call it sailboat racing, kitesailing may be the one Olympic sailing discipline that will pull in the average TV viewer.
Posted by Tweezerman at 1:49 PM 5 comments

The photo of the Irish lady leading the Olympic Laser Radials, hiking flat out and spray everywhere, has been closely scrutinized by some of our sailing bloggers to determine if both of her feet were in the hiking straps.

Well I've dug out another photo of an Olympic class where, after zooming in for more detail, and panning around, I've determined that this skipper definitely didn't have his feet in the hiking straps. 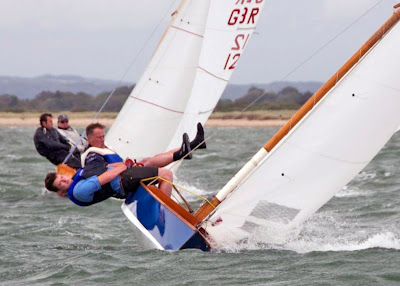 (I've stretched the definition of Olympic class just a bit; this is a photo from 2012 British Nationals of the 12 Square Meter Sharpie, the two-man class in the 1956 Melbourne Olympic Games.)
Posted by Tweezerman at 7:17 AM 2 comments