The previous header photo was from a Sunday start at the 2011 Classic Moth Nationals. Unlike this year's crawling breeze, the 2011 Nationals had some breeze. In the background of the photo is the Museum of the Albemarle (green roof), Elizabeth City, North Carolina, which has some of the more iconic Mothboats from the early years on display.

Posted by Tweezerman at 6:00 AM 0 comments

The 2020 Classic Moth Nationals in Elizabeth City was a drift-fest, with racing only on Saturday. The 2020 Nationals were postponed for one month because of concerns over too much wind from the remnants of one hurricane. Ironically the rescheduled Nationals had the wind sucked out of Elizabeth City by the passing of the remanants of another hurricane.

As usual, George A. over at Mid-Atlantic Musings has the complete report.

Posted by Tweezerman at 3:48 PM 0 comments


As an old codger, I am somewhat ambivalent about the current crop of foiling monohulls. I grew up when the America's Cup had all the stodginess of an English fox hunt. When a bunch of old guys in blazers and straw hats would slowly motor over to your 12 meter and solemnly announce, amid tight smiles and long faces, that you were no longer needed in the defender trials, or conversely, you had been chosen to defend the America's Cup, and the smiles were broad and congratulations poured out. When two leadmines would pirouette, and luff, and yell before the start and then proceed to bash their way upwind at what seemed to be a brisk walking pace. The dominant 12 meter would work out to a half boat length lead after fifteen minutes. But there was a certain charm, albeit far removed to what most of us considered the sport of sailing.

The modern America's Cup is all F1 motor racing. Speed, and more speed from spider-like contraptions. So much speed that serious injury in a major mishap becomes part of the sport, just as in motor racing. I've never been a big fan of watching motor sports on the TV, so I approach today's foilers with a shrug of the shoulders (although I marvel at the technology and recognize the courage and skill of the sailors). When every America's Cup foiler is going about the same speed, the gauge becomes lost except for a massive rooster tail of spray spurting off the main foils. I must admit I have some sailing friends that are very gaga over the speeds of this year's America's Cup monohulls so I may be in the minority opinion in this. As it was with the 12 meters, this sailing is also far removed from what most of us consider the sport of sailing.

From Planet Sail, here is an interesting video on the thinking behind the current technology revealed as the generation 2 of these monohull foilers launch into battle.


Chris Thompson, famed author of the complete small boat racing history over at Sailcraft blog, takes exception at my disparaging remarks about the old America's Cup (the 12 meters, the IAAC leadmines):


"With great respect, Tweezerman, I'll say that for many years the "old" wasn't actually all that far removed from what most of us thought of as sailing. When the Universal Rule was adopted, for example, as you'd know the AC boat were just big versions of the M, N, P, R, S etc classes that were sailed in their dozens at local clubs and regattas. I once calculated that the British AC challengers of the 'tween war period sailed at something like 20% or more of ALL British sailing clubs each year, if I recall correctly. Around the time the 12s were adopted, there were still Metre boats racing in the UK, Europe, USA, Australia, etc at clubs each weekend. The first press releases for the IACC class stressed that they were going to be like sportsboats, although they morphed into skinny leadmines. So the old AC was largely sailed in big versions of fairly common mainstream club and regatta boats, and I know that something like running the bow on a 12 isn't vastly different from running the bow on an IOR boat or Beneteaul from personal experience, you can step onto the pointy end of a 12 in a class race and feel pretty much at home. The foilers, on the other hand, are completely divorced from almost all club and local regatta level racing. There's only about 25 other ballasted full foilers in the world as far as I can make out, all of them on the European lakes. Go to Cowes, Newport, Sydney, Kiel or any other of the centres of our sport (apart perhaps from Garda or Lucerne once in a while) and you'll find nothing like an AC boat - although ironically you'll still often find boats that are small versions of AC boats of many years ago."

Posted by Tweezerman at 4:44 PM 4 comments

Make a Hole; Plug a Hole 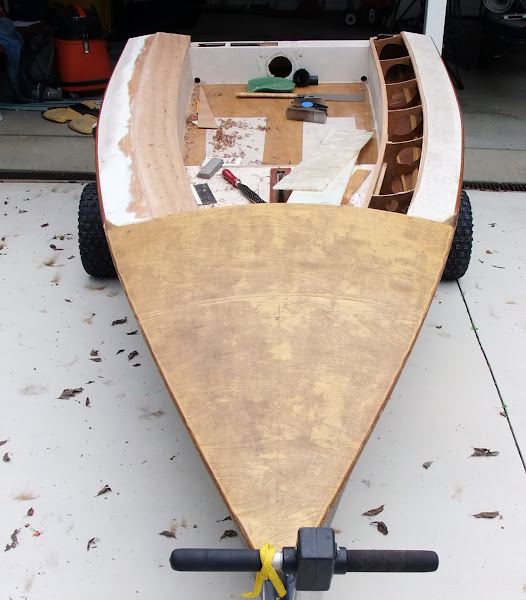 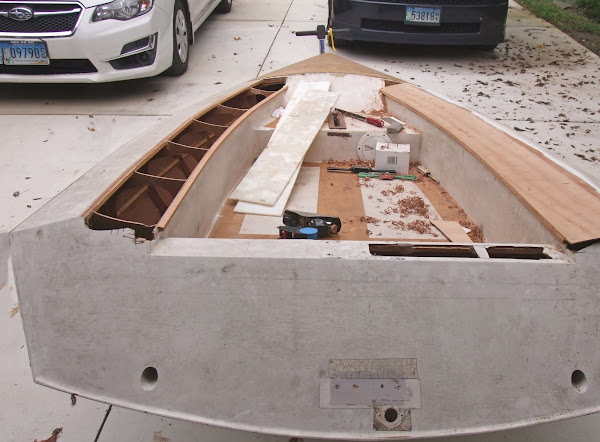 I picked up the Savannah Wedge back in 2015 and like many of my projects, the Wedge sat neglected, aging in place, getting dirty, while I figured out what I wanted to do. With Covid-19 I'm back again making holes, plugging holes on the Wedge. When a Savannah Wedge has been raced, back around 2010, she performed miserably. It suffers from too much wetted surface, the bane of slow Classic Moths. Yet I persist. The original idea was the Wedge would be an ideal Moth to take the grandkids out; she does have a grand big cockpit. We shall see; for there are more holes to cut, and more holes to fill.

Posted by Tweezerman at 5:22 AM 3 comments

Oh Noooo! Not a Foot Plant on the Mainsail! $$$

The previous header photo was of a Flying Dutchman capsizing; the trapeze crew being flung off the gunwhale by the quickness of the capsize. Been there, done that many times. Experienced trapeze crews know the type of landing by this crew can be very expensive. A double-foot plant on the mainsail, so near the boom, is a recipe for a long tear in the mainsail and a trip to the local sailmaker. For those who are paying for the error of their helm, the recommended best effort and the least expensive method to execute a landing, after being unceremoniously catapulted, is to endeavor to make a belly flop higher up the mainsail. Not easy to execute but even a four point landing, elbows and knees, would avoid point loading the mainsail

Posted by Tweezerman at 5:47 AM 4 comments


Another post about the straight-stemmed vintage dinghies. From the July 1967 issue of One Design and Offshore Yachtsman magazine, a stunning photo by Peter Barlow of a Thistle bombing along on the sparkling sea. 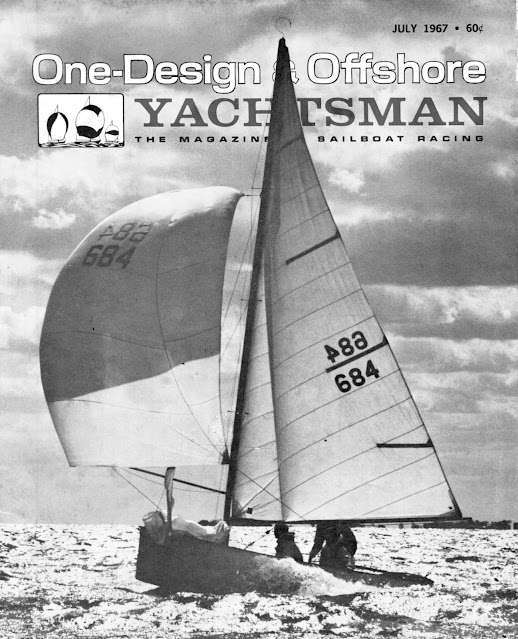 I lived out in Ohio at the same time as this photo. Ohio seemed to be the epicenter of the Thistle kingdom, (the Ohio-Penn District Championships regularly saw fleets of 60 or more in the 1960's.) I raced on the Thistle several times. There is no better light air dinghy going. It was said to be faster than the Flying Dutchman when the wind turned to zephyrs so it was an ideal dinghy for the Midwest Lakes. I crewed on one in a big blow in Lake Erie once, but that is a story for another post.
Beautifully restored wood Thistles show up occasionally. This is from the 2012 Mid-Atlantic Small Craft Festival in 2012. 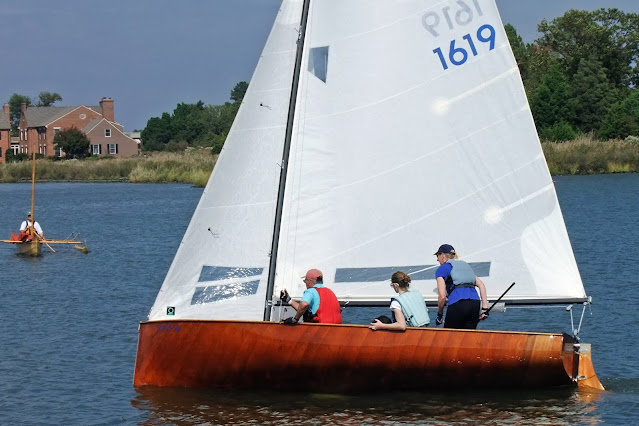 Posted by Tweezerman at 4:45 AM 0 comments