Continuing the photos of the 2012 MASCF sailing race.

The very quick Thistles are usually at the head of the fleet, not surprising as there are very few racing dinghies in the MASCF sailing race (this year the Penquin, a Sunfish, several Blue Jays and an elderly Comet sailed by a father/son team were the other boats with active racing class associations). This year there was two Thistles racing, with the very nicely restored woodie from Cleveland comfortably in front of the fleet. (Sorry Doryman, no Thistle from Delaware!) 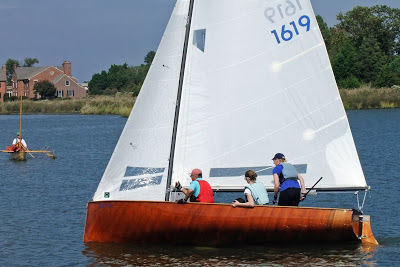 The Celebrity class was a popular class in the 1960's. Close to 20 foot in length and based off a Dutch centerboard class, they are very comfortable daysailors. One showed up at MASCF and finished well up. Unfortunately a rare sight nowadays. (Blogger Tim Shaw in the background with his skin-on-frame outrigger canoe.) 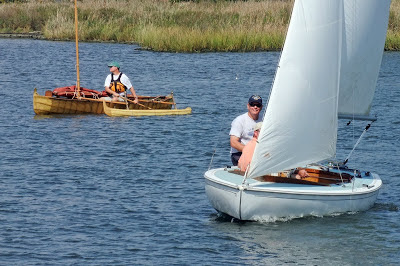 The Cortez 16 is a stretched Melonseed that has been developed by Floridian Dave Lucas and his merry band of DIY'ers. (Dave is the MC of a boatbuilding commune just outside of St. Petersburg Fl - a bunch of different projects going on simultaneously under a large gazebo type structure; my friend Bob has seen it and he was mightily impressed.) The Cortez 16 has found favor with good sailing characteristics, a traditional appearance and an ability to carry 2-3 people comfortably. Not sure if there are plans available or if you have travel down to Dave's place and build one on the mold that he has.

Update: Readers have provided more information (and corrected some errors) on the stretched Melonseed in the Comments section. From Doryman, "The Melonseed is "Moggie", built and skippered by Mike Wick of the Delaware River TSCA.." And from the builder himself, Mike says, "Although my MOGGIE wasn't built at Dave Lucas' shop, it was inspired by him. Plans are available from Roger Allen of Buffalo Maritime Museum. Further information is available at an article I wrote about Moogie." 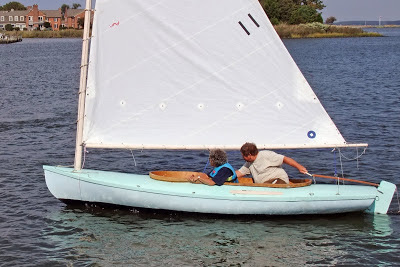 What looks to be a very pretty Crotch Island Pinky. 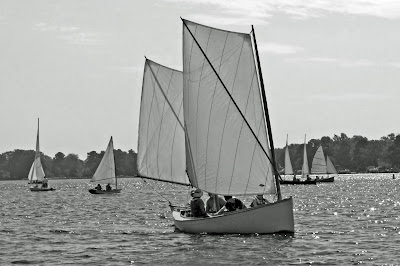 Local boatbuilder, Peter Van Dine, did a production run of fiberglass Tancook Whaler type cruising/daysailors (I think in the 1970's) which today are prized for their timeless classic style. (I remember coming across a funeral for a retired naval officer at the Naval Academy where he had requested his beloved Van Dine Tancook Whaler be moored off the Academy sea wall while he was laid to rest.) 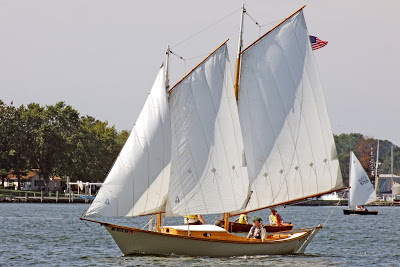 The finish line of the sailing race is off the outermost point of the Chesapeake Bay Maritime Museum. The wind gets fluky and this year it was also upwind. There are always gaggles of boats bunched up and sometimes blocking the finish with the race officer yelling admonishments, "Don't hit anybody!" (You also need to take the time to yell your festival registration number at the race officer to be counted as a finisher, as this Blue Jay is doing - the Penquin is in the background as well as a self-designed plywood cat-ketch daysailor.) 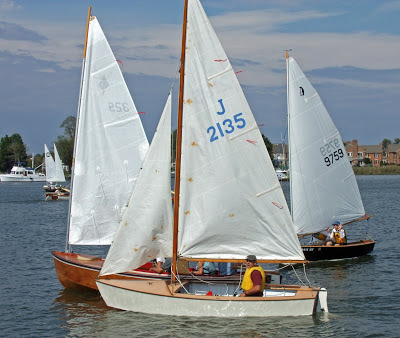 Posted by Tweezerman at 3:34 PM

The Thistle is probably my number one bucket dinghy, because I could probably sail it by myself in most winds. A rounder-chined and longer version of my beloved Penguin. BTW, that Penguin can't be that old, with hull number in the mid 9000s? I also think aluminum spars shouldn't be allowed in that class. I can hear my wife now, calling me an old fart.

You know I used to walk five miles to school and back every day. Barefoot.

I have a better picture of the Penguin racing at MASCF I'll publish just for you, Baydog.... in a later post. They had Ohio registration numbers so they may have teamed up with the Thistle to come out to St. Michaels for the weekend.

The melonseed is "Moggie", built and skippered by Mike Wick of the Delaware River TSCA. It was cold-molded over one of Dave Lucas' boats, but is a creation all it's own.

And yeah, I thought so. Those Thistles were too new to be my old "Sweet 16".

I used to walk five miles to school and back every day too. Barefoot. In the snow. And it was uphill both ways.

Although my MOGGIE wasn't built at Dave Lucas' shop, it was inspired by him. Plans are available from Roger Allen of Buffalo Maritime Museum. Further information available at www.traditionalsmallcraft.com