In March, having some time on my hands, my daughter asked me to help her coach her high school womens lacrosse team. I said yes, having done quite a lot of spectating at womens lacrosse games, but no actual coaching. The season, behind the bench as it were, was a great experience and a lot of fun - the high school athletes at Wheaton HS had a great attitude - win or lose. We weren't that good - every win was a struggle but we got a couple of them which made the season.

What I learned during the lacrosse season is I can't coach and blog - my brain isn't wired to switch from thinking about defensive matchups and offensive techniques to then write a sailing blog. It wasn't happening when I sat down to the computer.

And that's my excuse. 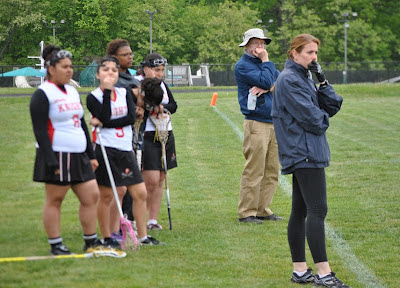 Email ThisBlogThis!Share to TwitterShare to FacebookShare to Pinterest
Labels: Coaching

In the days before you had motors on sailboats, but still idiots on the helm.....from the Sept 10, 1900 issue of the newspaper, Toronto Daily Mail and Empire;

"Shortly after midnight Thursday night the schooner Fleetwing entered the river mouth and headed for the harbour. Something was evidently wrong on board, for before coming to anchor the schooner had created no small amount of damage to the yachts belonging to the Rochester and Royal Canadian Yacht Clubs. The local yacht Cinderella was tied up to the pier near the lighthouse, and although there was apparently no excuse for so doing, the stranger luffed wildly and before the crew of the yacht could protect themselves, the Cinderella's spreader was carried away. Then the schooner made for the steam launch attached to the yacht and punched a hole in her bottom and otherwise damaged the craft. Continuing further up the river the stranger, which by this time had aroused several of the yachtsmen at the clubhouse by the noise she made, swung over  to the other side of the river and her jib boom made connections with the fore topmast of the Canadian yacht Clorita. There was a snap and the topmast went by the board. At last evidently satisfied with the damage done, and after yawning about the river a bit more and narrowly missing several more yachts anchored nearer inshore, she passed the bridge and made for her berth at Charlotte. The Clorita was anchored almost directly opposite the clubhouse and but for her presence some of the smaller craft astern of her might have suffered severely."

As an aside, Tillerman added this comment which got me laughing;


"Clorita has 3 vowels and 4 consonants,"

Posted by Tweezerman at 6:17 PM 3 comments

Curse of the Tillerman and Wrapup of the Wordsmith Boat Name

The Curse: Tillerman mentioned that when he bestows kudos upon another blog, that blog eventually goes silent. I didn't pay it much mind at the time, but doggone it, when March rolled around, just as predicted, Earwigoagin fell silent. I'll detail the reason in a following post but, now for unfinished business; the final tally of the boat naming exercise called forth in the last post before Earwigoagin went on hiatus (I hate to name it a contest because it really wasn't). There was some real humdingers. I liked the weirdness of the Captcha - computer generated - names but, and this is only my personal preference, my two favorites were:
Below is the table of all the boat names listed in alphabetical order, followed by their contributor. Tillerman leads the way in entries, as would be expected for, as a shark is drawn to blood, Tillerman pounces on all things related to word play. O'Docker, My2Fish and Baydog end up with about an equal number of multiple boat-names. And to fill it out there is a smattering of individual contributors. Thanks to all the entrants! If anyone out in the digital morass decides to name their boat "Elopygu", please let me know.


Tillerman and O'Docker have reminded me in the comments section that the following words were also submitted; Alabama, Arizona, Arugula, Indiana, and Romaine.
Posted by Tweezerman at 8:47 AM 5 comments