Oh! Wood Butcher, Slopper of Glass, What is the Answer?

One of the ironies of life is that I, the one who does not let craftsmanship nor beauty get in the way of working on boats (the gorgeous Tweezer was an aberration, due mostly to the efforts of Bill Boyle and George Albaugh..... I wanted to paint that Moth, to hell with all that pretty Atlantic cedar) it is I who seem to be asked my opinion on how to fix boats. I think that people assume that since I've built boats, I must know what I'm doing...Hah!

Last Friday, I wandered down to SSA and ran into Ali Meller, who for a good twenty years or so was Mr. 505 of North America (now he races road bikes and does quite well I'm told). Ali was helping a son and dad rig a newly purchased used 505 and I recognized it immediately as a Lindsay (the spruce rolled seat tanks were the give away). Ali confirmed my guess (in life's quest, knowing the lineage of a 505 may not seem much, but I'll take that little nugget as evidence of a superior intellect) and Ali elaborated further into the history of this particular 505. This 505 was one of twelve of the original batch of Lindsay 505's, where Mark built the wood interiors into a English Parker glass hull, circa late 1970's. We had a good laugh as that would only be knowledge that old fart dinghy sailors would know.

When the son started listing the problems of this older 505 (hey, all old boats have problems), he seemed particularly worried about the ply delaminating on the underside of the deck between the shroud bulkhead and the forward bulkhead. I didn't see a problem... if you can't see it, no problem. but then Ali asked me how I would fix it. How I would fix it??? Hmmmm! Hmmmm! (Try to look confident here.)

"Oh, Just turn the boat upside down, drill some holes, take a syringe and squirt epoxy between the delaminated veneer and the good plywood, take some bricks to force the delaminated veneer in contact with the good ply. Should be good to go. You do have some syringes don't you?" Delivered with surety, I didn't want to explain further, so I begged my leave to continue on my tour of the dinghy park.

It was only getting into my car, that I realized I wouldn't have fixed it that way, I would have cut the delaminated ply away with a razor knife, thrown it away and glassed over it with 4oz. fiberglass. A true half-assed Tweezerman repair.

Here is a top down picture of a later model Lindsay 505. This one has mahogany veneer rolled seat tanks instead of spruce. The used Lindsay I was looking at on the SSA dinghy park also had the foredeck painted, probably because the aircraft plywood, after 30 some years, was getting grungy (it was, after all, delaminating underneath). 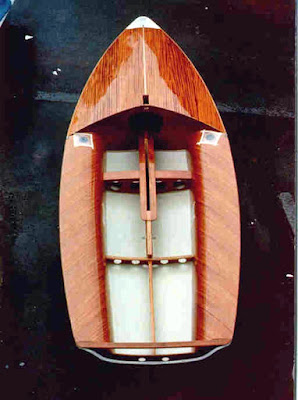 And here is a 505 punching off the leeward end of line during SSA's weekday TESOD series......... 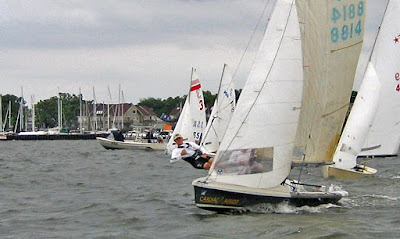 Posted by Tweezerman at 4:50 PM

Hey Tweezerman: speaking of boat repairs, when are you going to getting that Duflos Moth that's been malingering in your shop back on the water??? (the CMBA Nats are about a month away...)

PS: nice pix of ICs rigging up (your header photo). I tried to steal a copy but couldn't download it!

Pic is buried in another post on the blog. Look over here; http://earwigoagin.blogspot.com/2009/08/new-york-bay-sugar-island-and-decked.html

I've been piddling around with the Duflos but according to my better half, long overdue yard work and job hunting take priority.