What other memories do I carry from the 81 International Canoe Worlds?
Finally a picture of a youngish Tweezerman standing (probably because it was too painful to sit) in the Tabor Academy dinghy park alongside his first IC "No Eyes". Thirty years ago, the sailing kit appears prehistoric! 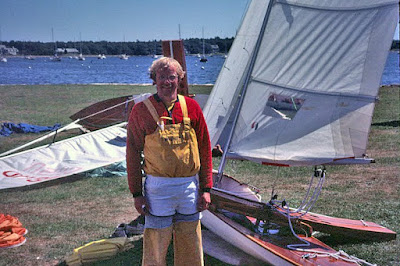 Posted by Tweezerman at 8:34 AM

I totally agree with you that living and eating at the regatta site makes the whole experience so much more enjoyable, but it is rare these days. We did at the Laser Masters Worlds in Cancun, and some sailors did at the Masters Worlds in Hyannis by renting condos next to the yacht club. For me, driving backward and forwards from accommodation to regatta site and then driving somewhere else to eat in the evenings makes it so much less fun (and wastes so much more time.)

I hope we are now going to hear about the other major champiomships you sailed that summer?