The previous header photo was of Classic Moth, Tweezer, drifting on Megunticook Lake, Camden, ME - Photo by Polly Saltonstall.


My Classic Moth Tweezer had been languishing over at Chief Boatbuilder Bill's Delaware residence since I redirected my attention in Classic Moths to putting together and racing a Gen I Maser. Bill raced her sporadically for a year or two but she had been inactive for the last couple of years.  Tweezer was sold this summer to Will Sturdy of Maine, who, upon Internet research, looks to be a boat-builder and also a stunt-kite designer and builder par excellence. The clear-finished, cedar-strip Tweezer will be in good hands.

This October, I was reading Carl Cramer's Woodenboat of the Week blog and came across a post of his that mentioned a Classic Moth attending a relaxed fall regatta, with the name Pollys Folly, sailed in Camden, Maine. Curious, I made an inquiry of publisher, John Hanson, one of the organizers. He confirmed, via email, that the Classic Moth racing at Pollys Folly was indeed Tweezer and directed me to his wife's (Polly Saltonstall) blog for a complete report and photos on this fun regatta.


"We have a small camp on Megunticook Lake, Camden, ME. that we call Polly's ( my wife) Folly. We have been doing the Fall Regatta for 10 years and we get anywhere from 10 to 20 boats of various types from single shells, kayaks, Blue Jays and usually a good fleet of Lasers. Since we began, the Laser fleet has taken on a life of its own. ... But that was never the intent with Polly's Folly, we just wanted to get more people out in small boats to end the sailing season with a bang and a barbeque, the more diverse the better."

More Polly Saltonstall photos from the regatta named after her. Tweezer, heading for the barn despite the calm, being paddled with the daggerboard. 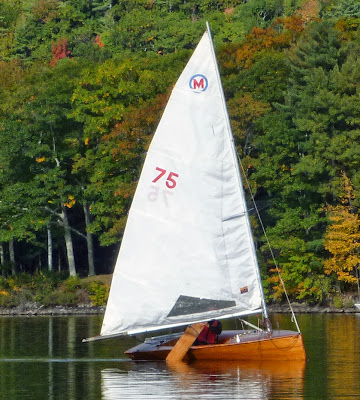 John Hanson has a pretty sailing canoe with the ACA lateen rig. He steers the way pure canoeists do, with a paddle. 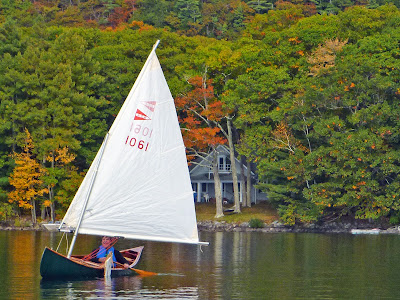 Tweezer, starting her journey north. Will Sturdy picked her up at the Brigantine Regatta, N.J. this past June. Photos by John Z. 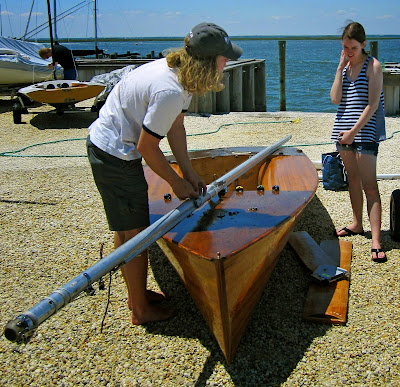 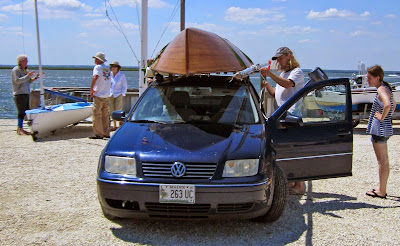 Posted by Tweezerman at 4:14 PM

Hey, I recognize that boat...
Tweezer had a great summer here in Maine and got plenty of time in the water. She's a total blast to sail when the wind's up!

If all goes well, she should be getting a new deck, new foils, and lots of cosmetic work this winter.

I believe there are now three classic moths in the immediate area, so hopefully we can get some racing in Eggemoggin Reach going next summer!

Glad to hear Tweezer is treating you well. I would be interested in seeing what you do to her for next season. Keep in touch. I always reserve some blog space for Tweezer news!