The original Rudder article with plans for the Skimmer can be found here.

I got an email from Chris Museler mentioning that his friend had picked up an old Classic Moth on Cape Cod. It turned out that his friend, Yarrow Thorne, of Rhode Island, had acquired a very unique find, a Skimmer type Moth designed by William Crosby in 1933. Crosby, the editor at The Rudder magazine, had designed the deep-V Snipe in 1931, which was published and heavily promoted in The Rudder. Now in the heart of the Great Depression, Crosby designed an even cheaper and easy to build sailboat in 1933, this being a catboat to fit the open 11 foot rules of the Mothboat class, a class only a couple of years old but proving to be very popular. Captain Joel Van Sant out of Elizabeth City, North Carolina had built the first Mothboat, Jumping Juniper, in 1929.

As with the Snipe, Crosby published the plans for Skimmer in The Rudder. Unlike the Snipe, the Skimmer was a very shallow-V scow design with no cockpit - a true sit-on-top dinghy. As the publication of the plans for the Lark scow in The Rudder in 1898 would have enormous international impact on small boat sailing, the publishing of the plans for the Mothboat Skimmer would also have a similar international impact. Len Morris, of Australia, had designed an 11-foot scow in 1928, a class he called the Inverloch 11-footer until he saw The Rudder article on the Skimmer and decided to change his class name to the Moth - after all his design was also an 11-foot catboat, a similar scow-type and what was the chance the Australians and American 11-footers would ever get together to race? 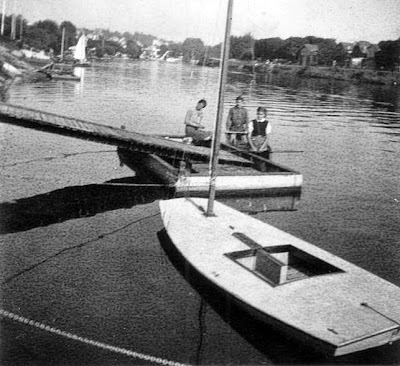 Considering the historical importance, a Skimmer should definitely be in a museum collection such as Mystic or The Mariners Museum.

Yarrow says his Skimmer Moth was built in plywood which puts the build date as possibly late 1930's or, even more likely, WWII or just after WWII. 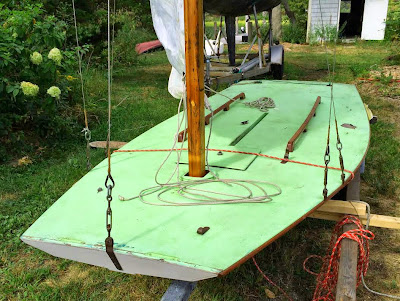 Double shrouds, high spreaders, a jumper-strut on a wood mast is very typical of the state of American Mothboat rigging before WWII. 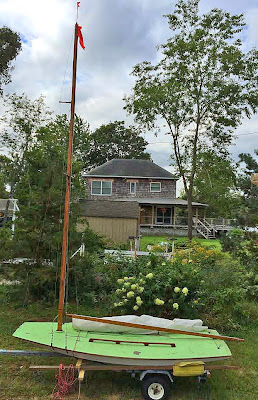 This Skimmer came without a sail, centerboard, or rudder. Yarrow was able to fit a Penquin sail on the spars. 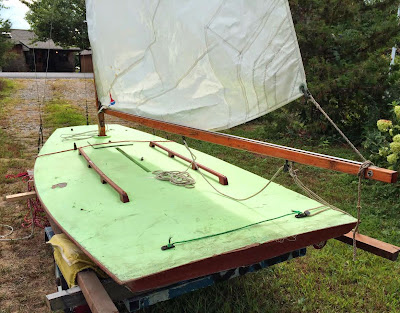 Yarrow was able to cobble together the whole package and race this November in the 2014 Archipelago Rally free-for-all race. In 2014 terms, the lack of cockpit and the low boom position on the Skimmer do not make for comfortable sailing (as we see below with Yarrow painfully kneeling on the deck - wondered what the tacking procedure consisted of - a belly crawl under the boom?). Considering that many builders of The Rudder sailboat plans had no compunction about modifying  the designs, I'm sure many Skimmers were built or modified to have cockpits. (But low freeboard scows like Skimmer were very wet and American Mothboats started evolving with cockpits but also higher, roundish torpedo decks to shed the water before it got to the cockpit.)

Yarrow sent along his impressions on his first sail in the Skimmer.


"The boat was very balanced, the sail was wrong and the tiller was too long, not allowing me to sit far back, I still need to learn how to sail but was very surprised to launch and sail within minutes for 1st time in over 30 yrs. The boat pointed OK in 20 knt's with chop, it liked the center board up a bit and I did not load the orig[inal] rig very much ;). but down wind WOW, it's a surf board and loves to have the nose even with the water, but if you get it wrong it buries the nose to the trunk in a heart beat.

This photo, lifted from the Internet, courtesy of Rufus Van Gruisen. 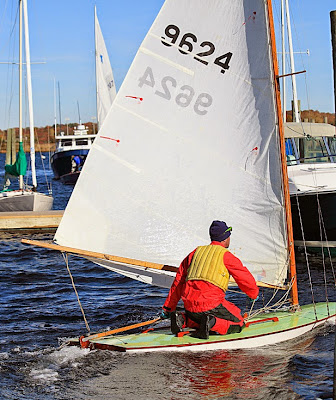 Posted by Tweezerman at 6:19 PM

This boat has been kicking around on Craigslist for a couple years. Glad to see someone has put it back in use. Plywood dates this boat to probably post WW II. The Skimmer design was featured in both pre and post war collections of "20 boats you can build" type books published by the Rudder magazine. I have a couple of those books with different copyright dates.

Glad it found a home!

How might this thing sail compared to an Alcort Sailfish? It looks very stable, and a bit prettier to my eye.

I don't know anyone who has tried to do a modern version of the Skimmer, so it is a bit of an unknown design. I would certainly add a cockpit for comfort.