In the history of recreational small boats the written record before 1870 is almost nonexistent. Before the U.S. Civil War (1860-1865), one is forced to look at art to get a feeling what was going on with recreational boating. The above sketch was done by Worthington Whittredge. Worthington Whittredge was a painter famous for his beach scenes around the Rhode Island coast. This pencil and watercolor sketch was done in 1856 and shows recreational small boats, presumably parked on a beach. The center boat shows a flat-bottom, pram bow boat with three rowing stations. The right boat, drawn with bow only, seems to be the same type as the middle one. I'm not sure this boat type has been documented, at least there is no match when I thumb through my copy of the Mystic Seaport small boat collection. It seems a combination flat-iron skiff with punt/scow bow features and flared topsides of the dory thrown in as well.

The left boat is definitely home-built. I'm guessing the design brief called for getting one person out in what was rough water (hence the high freeboard) to go fishing . The boat had to fit the lumber available which meant it had to be short (maybe 8 feet max?). It comes equipped with a paddle but I imagine the high freeboard and flat bottom did not help it track straight at all!

It occurred to me after I posted this that these row boats of 1856 shared some of the design lineage with my Kid Simple idea, which took the hull shape from the St. Michael's scow.

Update 8/17. John Watkins commented, "Looks a little bit like the chalk barge in Architectura Navalis Mercatoria, a book which has been reprinted about once a generation since the 1760s." With that hint, off I went to the Internet and found this image: 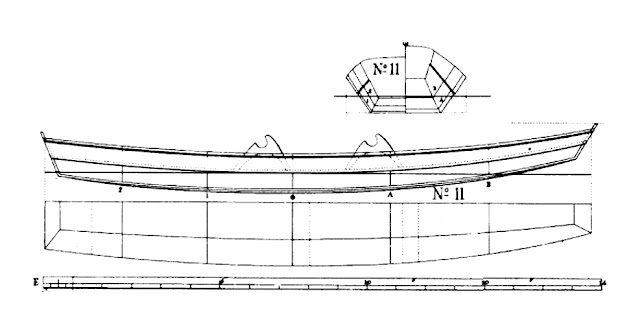 There are some similarities though the sheer line on the American model has a higher stern and lower bow. As I was thinking about it, even though the American rowboat has three rowing stations, this craft most likely had only two rowers, the forward rower had a choice of station depending on sea-state.

The image was culled from this Finnish website where the designer, Pieni Ekstack, has made a nifty 2.3 meter plywood rowboat, a shorter dink, very roughly based on this 1760's design.

John Watkins writes to tell me I didn't find the correct image for the Chalk Barge online. Here is the correct image he sent me. Much heavier displacement which makes sense if it was designed to carry cargo. If I'm reading the hull lines correctly it seems to have an enormous skeg. And the leeboard doesn't extend far enough below the hull. Very odd.

Looks a little bit like the chalk barge in Architectura Navalis Mercatoria, a book which has been reprinted about once a generation since the 1760s.

Thanks Anon. Now I've gone down the rabbit hole of Internet Googling for Architectura Navalis Mercatoria to see what craft you are pointing to. I think I've found it. I'll pull this into the main post.

That punt is related, but when I spoke of chalk barges, I had this image in mind: