The previous header photo was a start for the World's most popular Classic Moth, the one-design and ex-Olympic class, the Europe Dinghy. The Europe Dinghy remains a very popular singlehander in Europe, attracting the lightweight skippers that normally would fit into the Laser Radial class in North America.

Here in the U.S. many of the Europe Dinghy's have been snapped up by our Classic Moth crowd where they are a potent competitor at the Gen I level. (even though several of our older Mothists are sailing their Europes above "racing weight"). The Charleston, South Carolina Classic Moth fleet made a push last year and restocked their fleet almost exclusively with Europe Dinghy's.

As to be expected, the boat building contingent in the Classic Moth class can't leave the standard Europe Dinghy alone. (Part of the incentive to change things up is to lighten the package, as the Europe Dinghy class weight, 45 kg, is about 8 kg heavy within the Classic Moth class rules.) Last year Bill Boyle launched his stripper Europe he built from scratch. Two builders have gone the easier route and redecked older glass Europe's in wood. Mark Saunders redecked a Europe Dinghy three years ago which was written up by George A. in his blog.

Scott Sandell from the Sag Harbor fleet, redecked a Europe Dinghy a couple of years ago and sends along this report and some photos.


"My boat [Europe] is a Winner from 1989 or so, and had a soft deck (the tanks on these boats get soft over time). One of our guys tried to repair it by slapping on layers of glass, but it just made it worse (and heavy), so on a whim, and outside in a snow storm I hit it with a saber saw. Remarkably satisfying and almost cathartic! I cleaned the whole thing out while I waited for the ply to arrive. However, there wasn’t much time before the season was supposed to start and although I wanted to order ply from Boulter in Boston, Noah’s, or CLC, I went with a local company who delivered (at twice the price. . . dumb). When the truck came I realized they’d brought 4 mm instead of 3 mm, and I almost sent it back but I didn’t have much time and figured “how much heavier can it be?” The downside was that while I’ve always been able to cut the 3 mil with an x-acto knife, I needed a power saw to cut the 4 mil.

"And, of course, the boat was heavier than I wanted.

"Once I realized how far off my game plan I was I decided to make light of it and created “the gentleman’s Europe” complete with floor boards. I even designed a cupholder that accommodates a Reidel Bordeaux glass, and I painted the hull pink and made a red sail. Just for fun.

The interior bits glued together before the deck goes on. 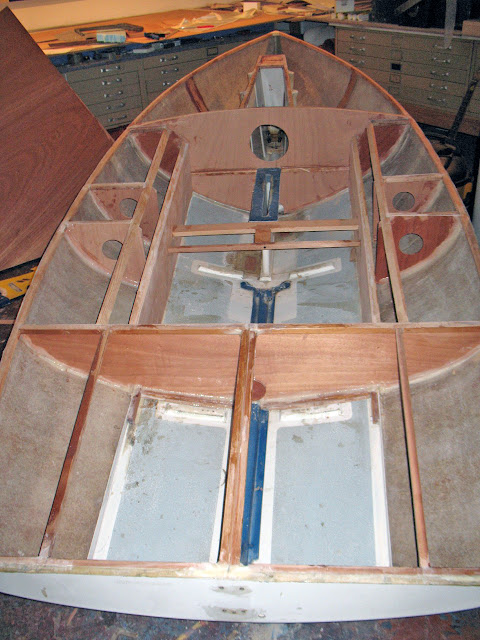 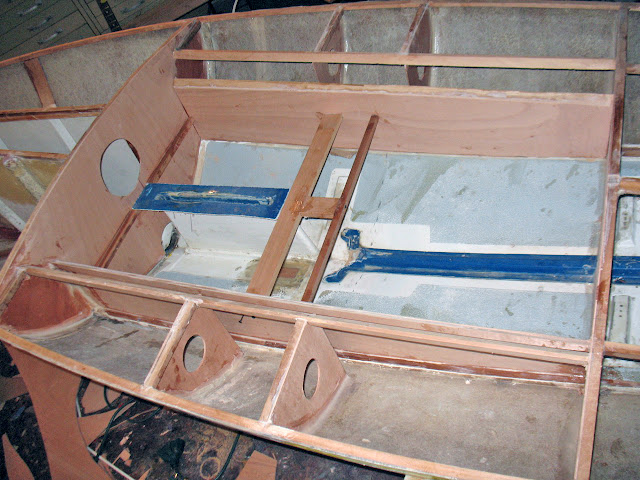 I didn't realize the fore and aft length of the original mast box (at least in the production Winner's from this era). 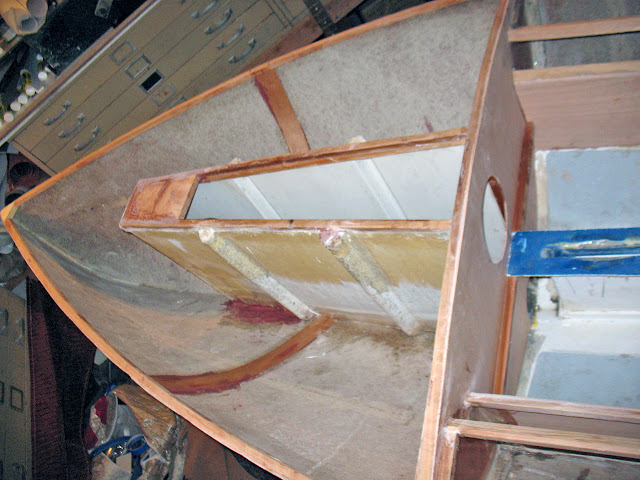 U.S Classic Mothists like to use the tub cockpit configuration. Scott Sandell follows the trend here. With a tub cockpit there is less water sloshing around. 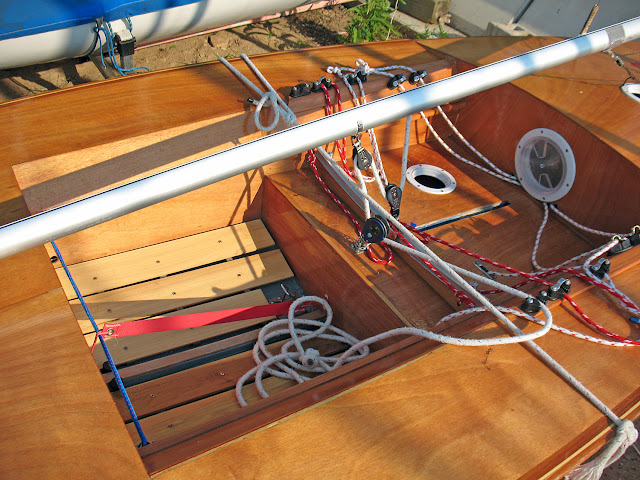 Finished deck. A wood deck certainly adds some class to a stock Europe. 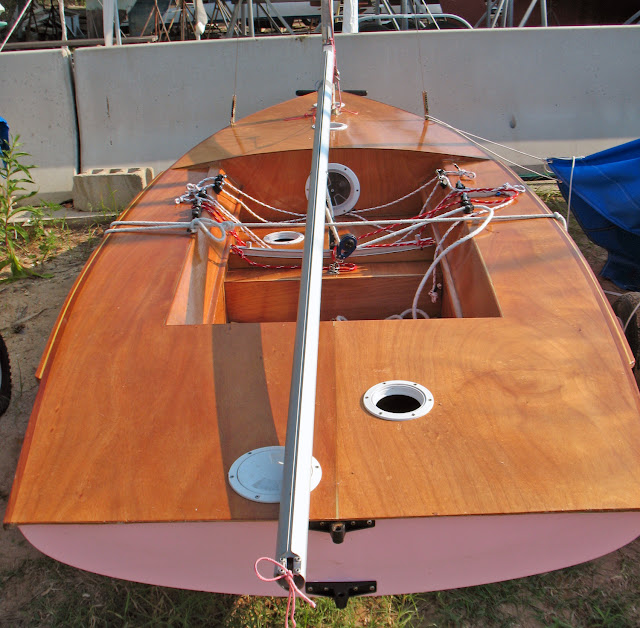 Double Elephant, with her pink hull and red sail, can't be missed on the water! Scott went with the simpler aluminum stayed rig instead of the normal unstayed carbon rig. 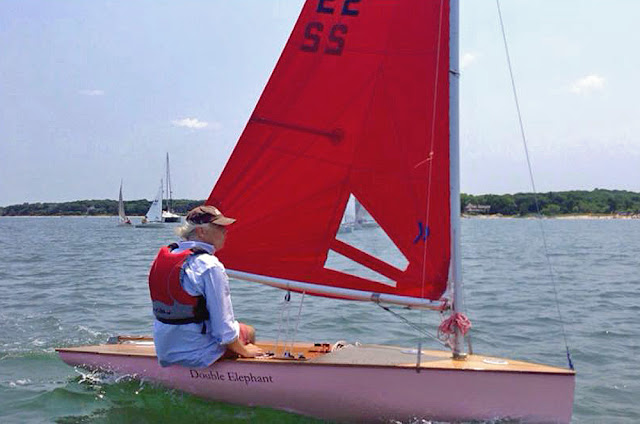 Don't forget the beautiful cold-molded 1970's Europe Dinghy's from European builders like Roland, Cristalli, and Galetti. Ed Salva owns this Roland which is a glass shell with a Christalli wood deck. 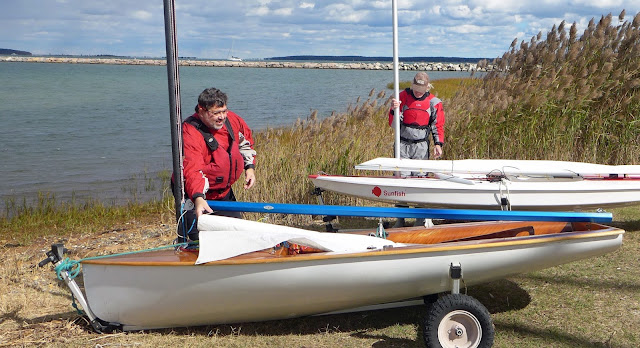 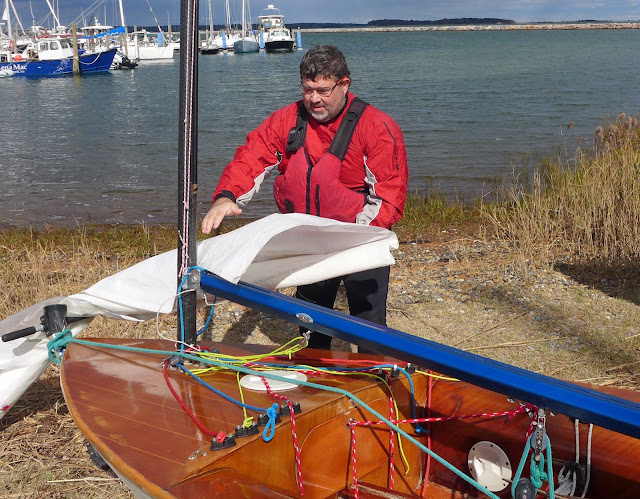 Posted by Tweezerman at 8:45 AM