Eleven Australian Sailfish made the trip to South Gippsland Y.C.'s 2017 Classic Wooden Dinghy Regatta (Australia Day weekend, January 25-28). This was an astounding number given that class stalwarts from the 1960's, 1970's and 1980's didn't start organizing until six months before the Inverloch regatta. As to be expected, this gathering of Australian Sailfish skippers was a reunion of primarily grey-beards. It will be interesting to see if the class can harness this new-found energy into some new builds and some younger skippers. It would be great to see the class translate a reunion into a renaissance of the Australian Sailfish.

Greg Barwick's more detailed report on the weekend from the Australian Sailfish website.

A Sailfish rounding a mark with the wooden International Canoe on the outside. 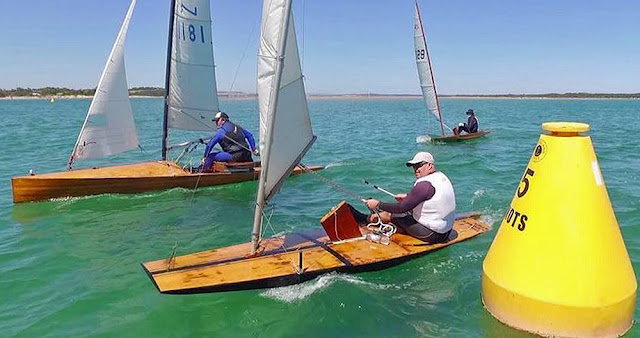 Chris Cleary (no. 1918), who contributed two Sailfish articles to Earwigoagin, chasing the eventual winner, Steven Floyd (no. 3400) who was the last national champion in 1987. 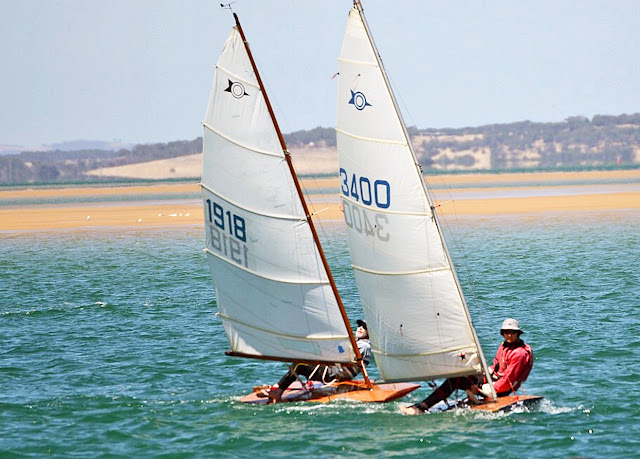 Chris Drury had the newest Sailfish at Inverloch. 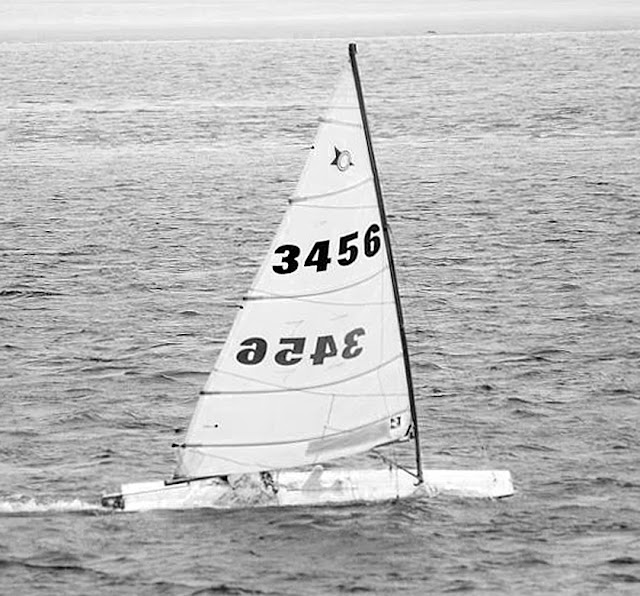 A beautiful graphic design on the deck of a restored Sailfish. Ian Milton's Apsu. 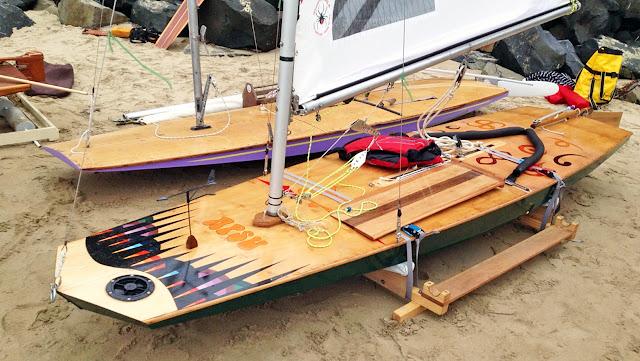 Ian Milton on Apsu focused on punching through a wave.

The bow snout of the Australian Sailfish. Chris Drury's Blowed if I Know. 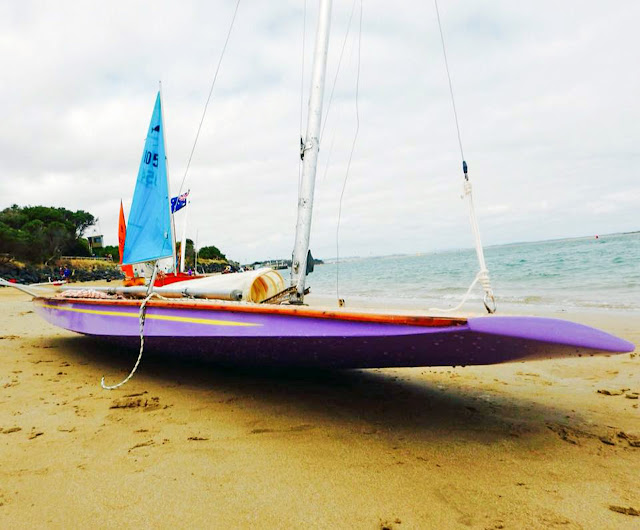 A race start. I've seen several sheepish comments from the skippers that starting skills were very, very rusty, hence only three Sailfish in this photo. 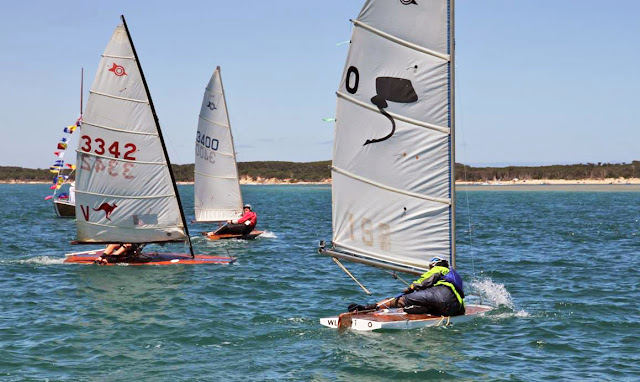 Four Sailfish skippers were able to reprise a photo-op from the 1970's. Jack Carroll, the Sailfish designer and class founder is second from the left. The Sailfish is Jack Carroll's original, no. 2, Debonair. 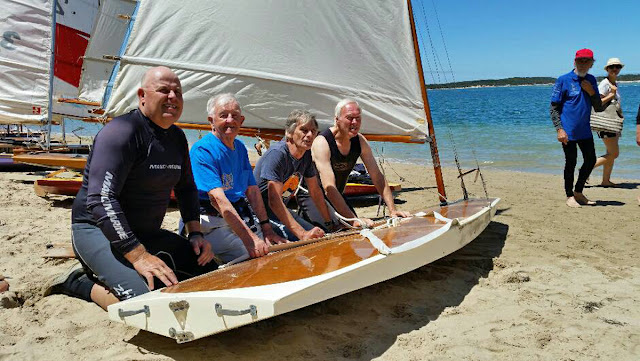 The original photo of the foursome from the 1970's. 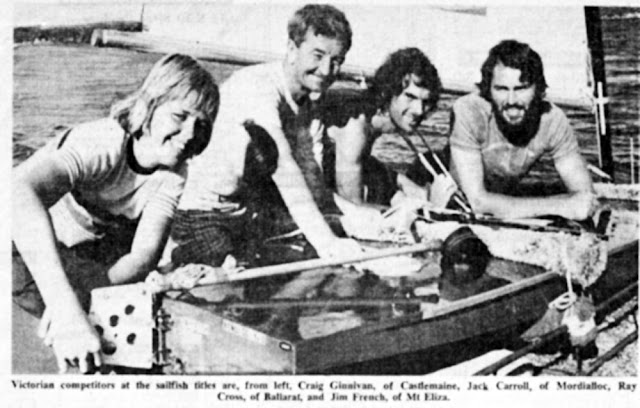 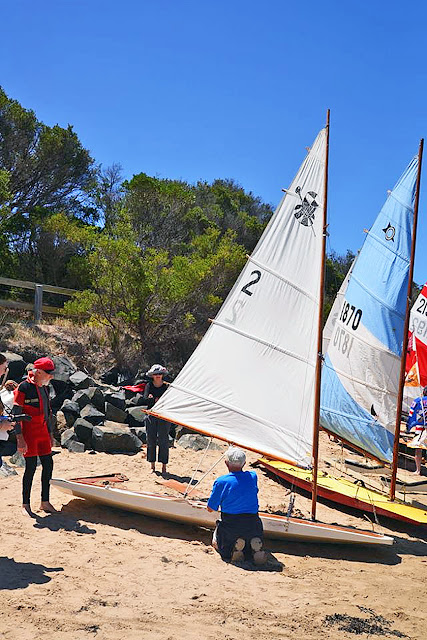 Tony Hastings made this video of his race at the Classic Dinghy Regatta on Flotsam, his restored Sailfish. Some rot in the transom allowed the gudgeons to pull away and the rudder to float up, ending his race (starting at 8:44). For those who wonder how you tack these narrow. low boom craft; the tacking sequences are at 1:41, 2:12, 7:00, and 7:41 in this video. Chris Cleary left a comment about Tony's unorthodox tacking technique which I've tacked onto the main post.


"Tony's tacking and gybing technique is very idiosyncratic. He has end-boom sheeting on his boat, which I hadn't seen previously on a Sailfish. That gave him space for his mid-boom belly flop. Effective though - he had his appropriately named relic going like a rocket. We were sailing side-by-side on very thin water in an attempt to avoid the worst of a strong ebb tide when disaster struck for Tony. He's an excellent sailor - a current top 10 Australian Paper Tiger catamaran skipper.

Posted by Tweezerman at 6:02 AM

The old and new photographs certainly show how we age over the years!!

The Sailfish is about as close to the water that a person can get without actually swimming! (hence the 'fish' part of Sailfish no doubt) A surfboard with a sail! great stuff and they sail beautifully.

Seems just about as uncomfortable as the US Sailfish

Tony's tacking and gybing technique is very idiosyncratic. He had end-boom sheeting on his boat, which I hadn't seen previously on a Sailfish. That gave him space for his mid-boom belly flop. Effective though - he had his appropriately named relic going like a rocket.
We were sailing side-by-side on very thin water in an attempt to avoid the worst of a strong ebb tide when disaster struck for Tony. He's an excellent sailor - a current top 10 Australian Paper Tiger catamaran skipper.

I was going to make a comment about the US sailfish, but wavedancer beat me to it!

I have a fuzzy but still vivid memory of sailing a sit-on-top American Sailfish one afternoon as a teenager. Pure unadulterated fun blasting back and forth. No other craft gives you the feeling that you are part of that bow wave, curling and then flattening as it reaches you, bouncing and bashing, spray enveloping you, as you careen back and forth. The precariousness of fighting to stay on the slippery deck just adds to the adventure.

The amazing thing about the Australian Sailfish is how many have survived.

How many classes of that era can still do that???

Compactness and easy storage has meant the survival of the sailfish when other classes have just disappeared.

New boats are being built too. I know of a guy building two in California!