Header Photo: Cherub on a Roll-Over

For the previous header photo I remained with an Antipodean theme (they are, after all, the ones sailing during the Northern winter) The photo was of a modern Australian Cherub dinghy losing it on a spinnaker reach during this years Australian Cherub Nationals. The Earwigoagin archives feature several post about this blasting machine. Unfortunately the class split internationally about ten years ago with the English deciding the make their Cherub class a mini-International 14 with two trapezes, narrow waterline and a much larger rig.

The Australian's, on the other hand, retained the old development rule, with single trapeze, wider hulls and smaller rigs; a sensible decision in my book as it allows many different body types to race this high performance skiff. Because of the Cherub's manageable size, there are a fair number of successful women helms. Andrew Chapman, one of Earwigoagin's Australian correspondents, reports of this year's nationals, "25 of the 80 crew were young women ... [with a] Lady skipper first and lady skipper second." Andrew would like to see the Australian Cherub class gain a foothold in North America. I agree but that would have to reverse a trend in North America which has seen the disappearance of many of the single trapeze performance classes that were active in North America in the 1960's, 1970's, and 1980's. (The 505 being the one single trapeze class still chugging along in North America but that is a brute of a dinghy and requires some beef to race successfully.)

A precursor photo shot just seconds before the completed layover of the header photo. 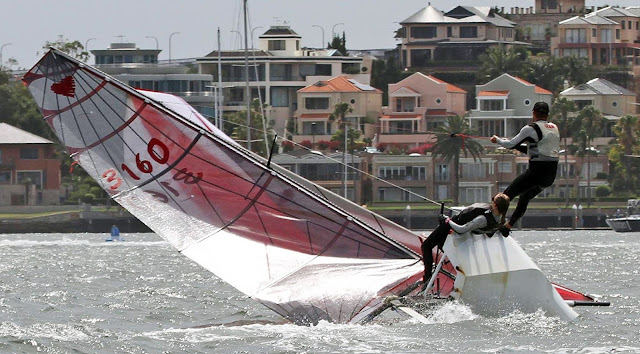 A nice shot of the clean open interiors of the modern Cherub. 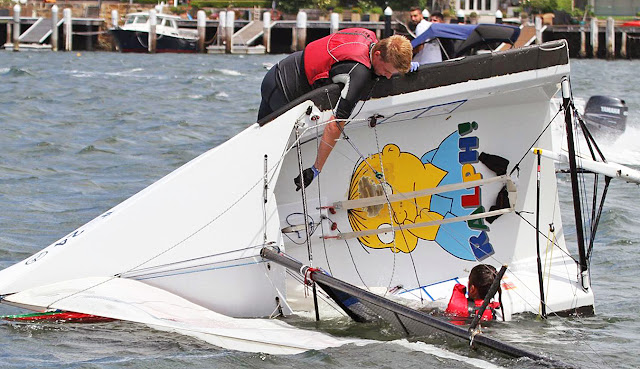 I always like the dinghies that inject some color into the fleet. A leeward mark rounding and hardening up.

A superb video from this year's Australian Cherub Nationals.

The way the Cherubs rise from the water is like the 'eighteens'?