As you would guess, I have a lot of sailing images collected from the Web; some filed in generic terms that give me no help in identifying them when I want to post them up on Earwigoagin. This great photo is one of them. I filed it under New Zealand-boat-planing, but I have no idea what class it is. This is quite a large dinghy, planing quite happily. I peg the date to be immediate post WWII. I'll see if any of my readers can fill in the details.

I figured it would be Neil Kennedy, Antipodean historian par excellence, that would set me straight on this photo. Neil writes:


"That [photo] is definitely NOT a NZ class; we didn't ever wear white sailing gear and "Aussie Sunhats". I think you will find that the picture is of a 21ft restricted class that was sailed in Tasmania, Victoria and South Australia from the early 1900's till the 1950's. They had a challenge trophy which was fought out on an interstate challenge basis with a level of intensity to rival the NYY (New York Yankess for those not versed in American sports culture) v Red Socks saga's. I have a feeling that they originally sailed for the "Stonehaven Cup", donated by a Lord Stonehaven for interstate competition, but not 100% certain on that. I think a couple have been restored in Tasmania, and were featured in recent "Classic Yacht regatta's held in Hobart. Like all Aussie yachts they carried plenty of Rag ( sail) and a crew of hefty footballers to keep them afloat."

TOH to Neil of NedsLocker.

More digging around the web shows this is the Tasmanian 21ft. Restricted Class, Tassie Too, recently restored. And the Interdominion Cup was called the Forster Cup. From the Royal Brighton Y.C. Victoria history: 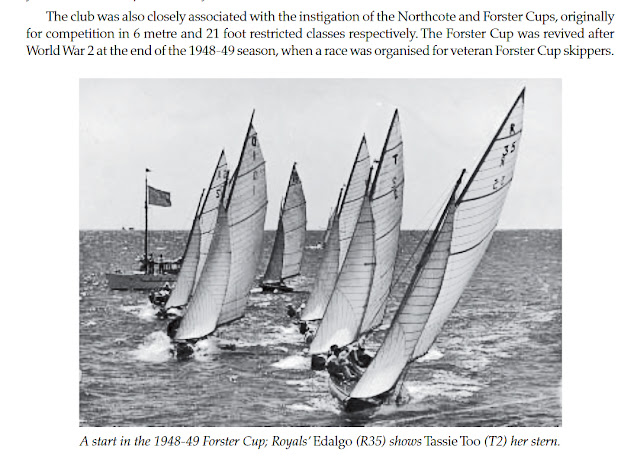 Posted by Tweezerman at 4:36 PM

Restricted 21's are still an active class at the Goolwa Regatta Yacht club in South Australia. A new boat was built a few years ago. I think there are 5 boats still racing.

Cool! I would love to see some modern photos. I will do some digging on the InterWEBs.