Continuing on one of the common threads throughout this blog, that being all things scow related, I've dug into my photo archive to post some photos of the Aussie scow Moth. The Aussie scow Moth is a particular favorite of mine since I owned one for several years and dragged it out to race once a year at Brigantine N.J. Back then George A. had a start for "All things Moth but not a U.S. Classic Moth" and I  and the scow suffered through some miserable light air performances to get a chance in some breeze. I wrote about my Aussie scow here.

Oztayls (This has got to be mnemonic for something - don't know what though? Aussie Tales?) has started a blog about his restoration of one of the later designs of Aussie scow.

Here is a early picture, probably mid 50's since they all look like variations of the original Len Morris single chine model and sport wooden masts. I'm guessing one of the clubs around Sydney. 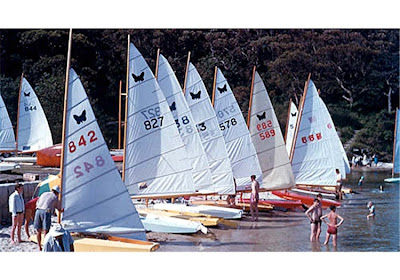 Again, Sydney Harbor, though later, a start in the 1960's. The scow on the left sports a "walking stick mast" with a sizeable luff tube to clean up the air flow, developed by Rick Le Plastrier. Amazingly advanced for the time, this predates the Windsurfer rig by about 20 years. They had trouble depowering this rig so it fell out of favor. 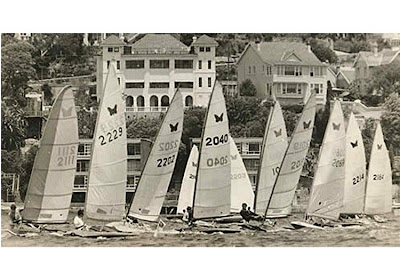 Winged Scows: The International Moth class increased the beam around 1969/1970 so the Aussie scows adopted wings along with the rest of the class. The pics below are recent ones of the winged scow versions. The red scow in the bottom picture looks to be one of the narrow, single-chine scows that were developed in a futile attempt to keep up with the skiffs which were getting extremely narrow and faster (when the skiffs won the 1984 Australian Worlds in big breeze, this marked the end of the scow as a competitive Moth in its home country). 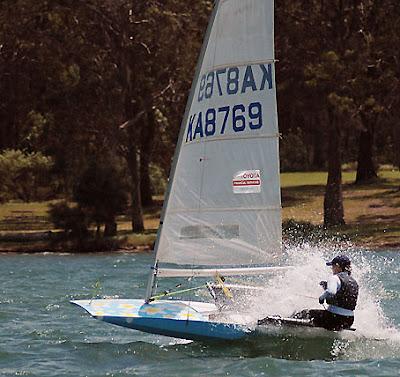 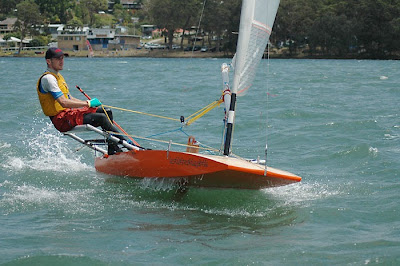 I have dragged a comment by this orange scow's former owner, Jon Reid, into the main post.


"That's me in the bottom pic, bright orange boat so the rescue boat could always find me. The boat was originally Learning Curve, designed and built by Bob Nicholson on Lake Macquarie north of Sydney. I did a major renovation to it in 2006 after tearing a hole in the bottom. Painted it orange and changed the name to TurtleTouchingCloth. Sold it several years ago and believe it is still at the Seaforth Moth Sailing Club. God I look young in that picture."

Posted by Tweezerman at 8:30 AM

Ray's been out sailing my wingless Aussie scow "Billabong" several times this week over on the very
sunny Isle of Wight ...

Hi Tweezerman, I just happened by and see you mentioned my scow restoration (I'm Oztayls). I guess Oztayls is a mnemonic, as I'm from Australia, my surname is Taylor and I do tell some tales :)
The launch date will be in early August, so will post some pics on my blog then.
I was able to get in contact with the designer of Max Headroom, Greg Marshall, who won the Aust Nats in Perth during the '63/64 season. He sent me a pic of Moth 2110 with which he won the title, which I can send you if you like. The scow with the walking stick mast was 2111, so it would have been of the same season as Greg's winning Moth. Interesting pics!

I would love to get any pictures of scow Moths. I checked your blogger profile and see that you don't have any email contact. Click on my profile and send me an email. Will add your blog to my blog list.

I'm jealous. Tell Ray to ship the Moth over here so we can all join in the fun.

Hi All
Wanted to show you a couple of shots of my New 1967 Imperium Scow Moth. Dear Mrs Brewster gave it to me.
Plan is to get it race ready but still looking for ideas.
I also have a set of plans if anyone interested?

Flick me your email and I'll send them on.

Roger, to reach me you can type the blog name (with our good friends at) google.com.

That's me in the bottom pic, bright orange boat so the rescue boat could always find me. The boat was originally Learning Curve, designed and built by Bob Nicholson on Lake Macquarie north of Sydney.
I did a major renovation to it in 2006 after tearing a hole in the bottom.
Painted it orange and changed the name to TurtleTouchingCloth. Sold it several years ago and believe it is still at the Seaforth Moth Sailing Club.
God I look young in that picture.

I've loved reading your blog. found it helpful and encouraging when I found and restored a scow here in Australia. It's about a 1964 wingless. It's now time for this boat to find a new home as my sona dn I want to sail in the same boat at the same time. We managed to sail the scow two-up for nearly two years! Anyway. Thansk for your blog. If anyine is interested you will find my lime green scow on the Aussi moth assn site.

Great memories with the scow. I bought one when I was at school in mid 70's in Sydney. It was called Tsunami. I often wonder what became of it. It was double chine and had wooden wings. Used to fly

I also had a full set of plans. They might still be at home would love to find them and have a crack at building one

If you have set of plans It would be nice if you could upload a copy to the files section on to the scow moth page on face book. Lots of nostalgia to work with there. A great archive for all moth enthusiasts. Mention The Tweezerman! Ray

What direction did they start modifying the Imperium? It was a shallow V scow. I like the wingless scows.

I raced a double chined, wingless scow on the Port Hacking River in the '70s. My first season I was about 5' & 6 stone. I swam around the course as anything over 20 knots dunked me straight in the water & the pick up boat used to follow me round to make sure I made it home. I put on another 1/2 stone the seconded season & managed to stay upright until the wind went over 25 knots. She was a wonderful boat to sail.

I'm looking for some good photos to use on the <a href="https://en.wikipedia.org/wiki/Moth_(dinghy)>Moth page on Wikipedi</a> - and some of these would be perfect!

Are any of them in the public domain, or would you be willing to donate them to Wikipedia?

These photos were harvested from the Internet and, as such, their provenance remains unknown. If it helps, I have not had anybody claim copyright or demand they be taken down for copyright infringement. I'm not sure that, in itself, is good enough for Wikipedia.

Would you have a full set of construction plans for your moth. I'm looking to build one for myself.