In my continuing series on home-built sailing dinghy classes from the 1960's, as featured in the One Design and Offshore Yachtsman magazine, here is the Butterball, a 9 1/2 foot pram with dory like sides presenting a very large beam for this size boat. I've never seen one in the flesh (unfortunate choice for a class name - I wonder if this was before Butterball was associated with Thanksgiving turkey?). I doubt this class never made it much past the 1970's but as with most of these classes there is probably one or two who exist in the present day. Leave a comment if you've seen one or have any more information. 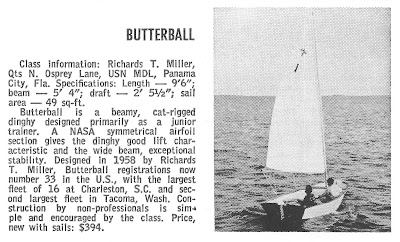 From the Sailboat Classes of North America, Fessenden S. Blanchard, 1963:


"In the summer of 1958 Captain Richard T. Miller, of the Ship Design Division, Bureau of Ships, U.S.N., who lives in Annapolis, Maryland, de- signed the 9'6'^ Butterball pram dinghy as a junior training boat. The most distinctive feature of the class is said to be a thick (1'%'') daggerboard with a symmetrical airfoil section. This is said to give the boat a good lift, so that she sails close to the wind and balances nicely. The designer reports that Bob Bavier (Yachting) sailed Number 1 boat in the spring of 1959 and appeared pleased with its handling qualities. Of the thirty boats so far built, most of them are located in the vicinity of Charleston, South Carolina; some are at Tacoma, Washington; others are in Texas, Michigan, Missouri, Australia, and New Zealand. Material is mahogany plywood. Captain R. T. Miller (R.F.D. 3, Box 392, Melvin Rd., Annapolis, Md. ) is the source of information on the class. The principal builder is Bill Dodds Boats (Route 1, Box 156A, Johns Island, S.C.). The price is about $400 new, one of the least expensive sailing dinghies of which we have heard.

What was the class sail insignia? A frozen turkey?

I thought the same thing. I looked hard at the picture and didn't make out anything discernible. Home for the sequestration?

Rod, you probably know that CAPT Richards T MIller was a local guy. I saw him at most SNAME Chesapeake Sailing Yacht Symposiums. He did an excellent paper on converting a Star to a nice Old Man's Daysailer. He was the laison with building torpedo boats for the Russian front, at the Trumpy Yard and was involved in the hoped for restoration and ultimate destruction of the "America" there. It's very possible that there were and may still be some Butterball dinghies at PSA.
TP

I had no idea. Have you seen one? I wonder if there are any plans left? Plans for these defunct classes should be archived for historical purposes. Let me know what you can dig up. Also fill me in with some more info on CAPT Miller. Sounds like an interesting fellow. You can email me if you don't want to use the comment box.

hello
i wanted to know if their was any head way on finding the lines, or a boat to draw them off of?
ben

I touched base with Tom Price (Mr. Anonymous in the above comments) and I didn't get much further as he felt most of Miller's nautical materials have now gone missing. That doesn't mean there isn't a set of Butterball plans out there - they just haven't surfaced yet. Ditto with a Butterball pram hull. I just haven't come across one yet.

thanks for the outreach. I am going to keep digging and see if I can come up with anything.
ben

the desgin of the butterball insignia is a drawing of the Baffehead duck, it's nick name being the butterball. the drawing was done by John Henry Dick. Still looking for an orginal.
MIght have found a boat in SC.
ben