The Dutch sure have a bunch of active, competitive classes that use gaff and/or gunter rigs. The header photo featured one of them, the 16m2, the class with the smiley logo. The 16m2 (16m2 being the sail area) is about the same size and weight as our Lightning class (6 meters or 19 feet, 450kg or about 1000lbs) and the design was copied for the U.S. fiberglass Celebrity class (now defunct). It appears the class is entirely varnished wood; I can't think of another class that is entirely varnished. And this class is not just a bunch of "woodie" sentimentalists; it is highly competitive with upwards of 40 boats showing up for the big regattas. A two man crew, with one on trapeze, and no spinnaker, the 16m2 was designed in 1931 by Hendrik Bulthuis, a hairdresser from Bergum (more at Wikipedia here).

Pieter Bleeker, who sails an International 12 now, sends along two pictures of him and his brother sailing a 16m2 back in the 1980's with this short message:


"On your blog I saw a picture of a boat, what is called in Holland a 16m2 or Grote BM I was surprised to see this model in the USA, because it is a typical Dutch class I know this boat very well, because I have sailed in it for more as 16 years." 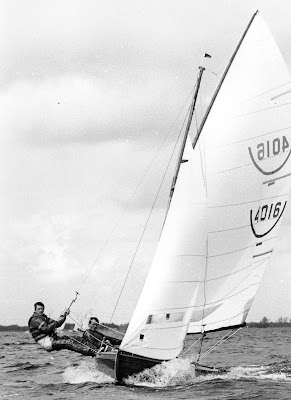 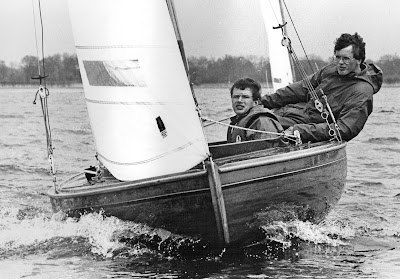 A video of a finish of the 16m2 at Schildweek.