Header Photo: Where Is This?

I have noticed in the bloggosphere that these quiz posts about mystery locations are very popular. The blogger puts out some picture with some obscure hints about where it was taken, or the context, people comment about where they think the photo was taken; someone, obviously brilliant or good at Google searches, comes up with the correct answer. This one has a little twist.

I have no clue where this vintage photo was taken.

I have puzzled over it for several months and come up with two educated guesses and one obvious fact.
So this may be one of the old yacht clubs on Long Island Sound - or not? I emailed someone at Larchmont Y.C who wrote back that it wasn't Larchmont Y.C, that he had an good idea of where it was and then was never heard from again.

To add to the confusion, here is another photo in the set (that may not be in the same location) that shows a gazebo and yachts, but also shows a rocky shore indicating a Maine location, or possible a L.Y.R.A rendezvous on Lake Ontario (this was my first guess but a L.Y.R.A. get together would not have so many large yachts, only the wealth of New York City could support this in the early 1900's). 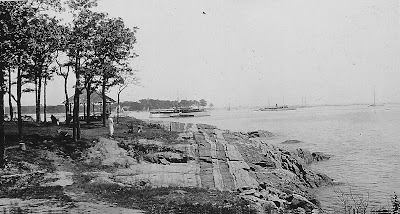 Oh, and here is the schedule for the New York Yacht Club Cruise - from the 1916 issue of Rudder magazine. (As always, click on any of the pics to get a larger view.) 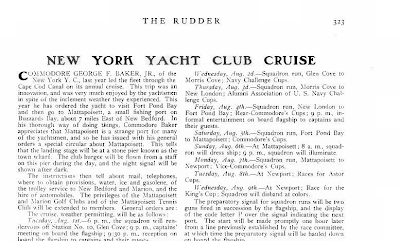 Posted by Tweezerman at 2:32 PM

The burgee on that swimming platform does look remarkably like the burgee for Larchmont Yacht Club.

And Manor Park in Larchmont is famous for its gazebos and striated rocks.

If you look at Manor Park on Google Maps satellite view you can actually see two gazebos on striated rocks very much like those in the second picture. But I can't identify the exact spot with those specific striations.

Could this be a more recent photo of the same spot?

Note that the gazebo may have been rebuilt in 100 years and a stone wall added. But look at the pattern of striations in the rock.

Check out this photo from the Larchmont Gazette.

Not the same day but surely the same view? Look at the trees on the point in the distance, for example.

This is a postcard from Horsehoe Harbor in Larchmont c.1900. There is a Horseshoe Harbor YC (which is probably why your correspondent from Larchmont YC said it wasn't LYC but he did know it?)

Oh, and I forgot to mention, Horseshoe Harbor is in Manor Park.

On the other hand check out this photo of Ladies Day at Larchmont YC in 1911.

This looks like a better match to your scene than that postcard of Horseshoe Harbor. The trees on the point look similar in both pictures but this one is claerly a wider stretch of water more similar to your picture. Would also explain why the swim platform has an LYC burgee.

Maybe your header photo was of Ladies Day at LYC?

This NYT article from 1910 does say that the fleet was dressed for Ladies Day.

And this NYT article from 1913 about Ladies Day at Larchmont that year says that more than 200 yachts dressed ship and that possibly the fleet was larger in "former years."

Thanks for providing me with a few hours entertainment this evening. Better than what was on TV I am sure! Sorry for cluttering up your comments with my sleuthing.

So I am pretty sure both photos are looking across Larchmont Harbor. If you look on a map you will see that the views from the gazebo in Manor Park and from LYC are both towards the same point on the opposite side of the harbor, to the NE and E respectively.

And there's a fair amount of circumstantial evidence that this could be Ladies Day. There were canoeing and swimming races on Ladies Day which explains a lot of the foreground in the header picture too.

I wonder which year. How did you deduce that is was probably 1913-1918? And how did you come across the photos?

Tweez, you've got to post another one of these quizzes at 6:20 on Super Bowl Sunday.