The sailboat race at the Mid-Atlantic Small Craft Festival starts around 1 p.m.on Saturday and is a quick, short jaunt, usually two legs, around the Miles River with the finish off the Museum docks. This year the fleet launched in sunshine which quickly clouded over, the sun peeking through occasionally for the race and then reappearing after the boats had finished. Luckily, the wind which had been blowing hard out of the northwest in the morning had moderated. About forty of the Festival sailboats, sailed out, turning the corner just outside of St. Michaels harbor to make the start.

I was able to again wrangle a ride on the Race Committee boat, the Volunteer, a thirty foot open workboat built by Chesapeake Bay Maritime Museum staff, ably handled by Asst. Curator Rick Scofield and Boat Donations Manager, Lad Mills. Although I have a reasonable knack for identifying sailing dinghies, I have difficulty in identifying the subset of designs by traditionalists such as Ian Oughtred and John Welsford. For the following photos taken before the start, readers may want to chime in with the boat types and I will add them later to this post.

Smiles! This is one thing that strikes a competitive racer, such as I, when viewing the fleet before the start. There were so many beaming smiles! This may be a Welsford Pathfinder yawl. 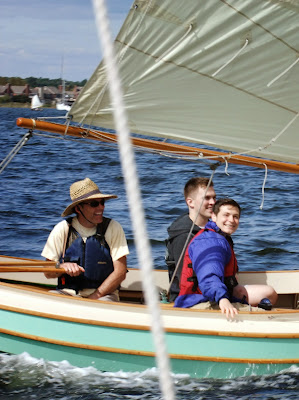 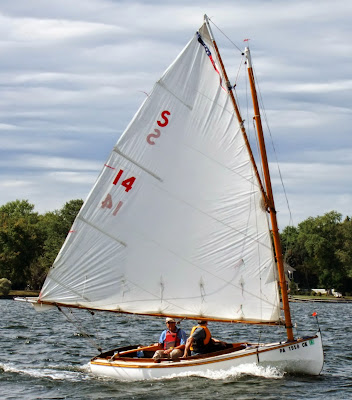 A green catboat with a balanced lug and lapstrake topsides. According to the Woodenboat Forum, this is a Tom Hill Modified River Skiff. 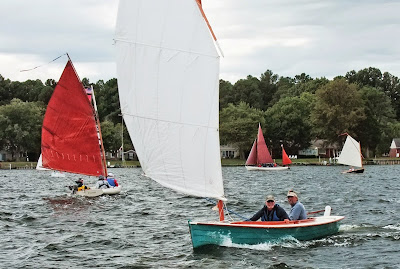 Spirit is a design by West River, Maryland icon, Capt. Dick Hartge. Capt. Dick Hartge built Spirit in his retirement in Florida. It is a stretched Chesapeake 20, adding 2 feet to the length, finishing in a pretty canoe stern. Restored by a group in Calvert County, Spirit, under one reef, easily won the sailboat race. 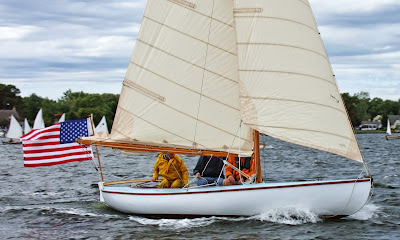 A regular attendee to MASCF, Bonito, a DC-10 dinghy. 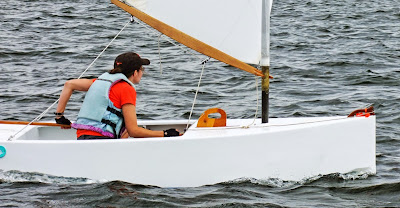 The C. Lowndes Johnson Eighteen Footer number 1. Pete Lesher with a crowd of family and friends. The Eighteen Footer's would finish 2nd and 3rd in the race. 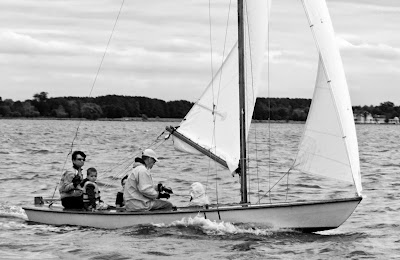 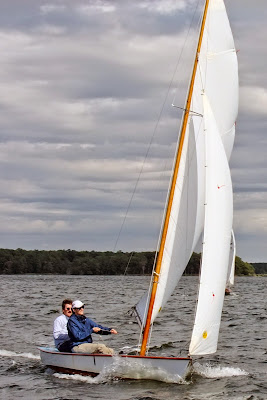 The start. In the foreground may be blogger Eddie Breeden and son. See his 2014 MASCF photos over here at Lingering Lunacy. We can see a 13' Blue Jay starting in the background. 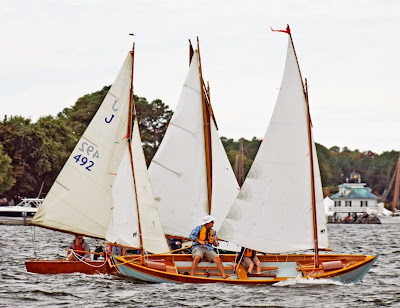 Another photo right before the starting gun. The Classic Moth is just left of center, to leeward of an ACA sailing canoe.

Posted by Tweezerman at 5:44 AM

Any chance of you attending downrigging in Chestertown on halloween weekend?

Thanks for the reminder. I hear it's gotten to be a big event with mostly large traditional ships/yachts (fronted by Sultana, Chestertown's own tall ship). I'll see how the schedule shapes up that weekend.

I'll be there Friday thru Saturday morning. Trying to talk George into going.