Wow! I feel good when I can use a couple of acronyms in a post title - goes to my head with visions of a job writing headlines for the Washington Post. One or two of my astute readers may have picked up that I haven't been sailing my Classic Moth this summer. A certain summertime ennui had taken over which made it difficult to find the time to finish some repairs I had started on my Maser (they are more-or-less done now... now being October). To get out on the water I had to make do with sailing OPB's (Other People's Boats), all of them (gasp!) keelboats.

In the middle of September, rather than attend the Classic Moth Nationals, I called up my good buddy Tom Price about the availability of a ride for the NSHOF (National Sailing Hall of Fame) race around Annapolis harbor that is part of the NSHOF's Classic Wooden Sailboat Rendezvous. As it turned out, Tom had been given the very pretty L. Francis Herreshoff,  canoe-stern, Rozinante design, Honalee, owned by Paul Miller, for the race (Paul was the Race Officer for the race). He needed a foredeck crew, not really my bailiwick since I am somewhat keelboat challenged, but I jumped at the chance anyway.

The actual race, scheduled as three laps around the Annapolis outer harbor became a light air slog. The problem I had on the foredeck was trying to cleat everything off on the two horn cleats on the mast, especially when we had the spinnaker up. Eventually Tom pointed out there were two other cam cleats on the mast that had escaped my notice. This helped partially cleaning up the rat's nest of ropes I had created at the base of the mast; a pile of halyards, and topping lift,  and downhaul . We finished third in our division, beaten by the two, very quick, wooden Stars. Mercifully the race was shortened after one lap.

Some photos - mostly mine except where noted: 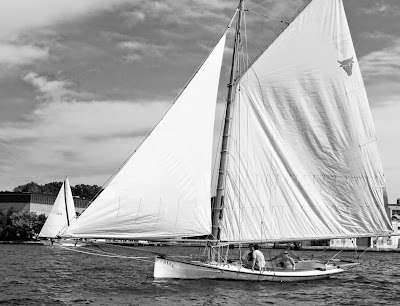 An Ed Cutts design that was sailed by an all-woman crew. Another design with a pretty sheer line. Ed operated out of Oxford Maryland. 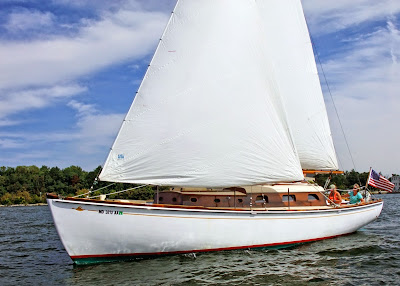 A wooden Snipe, one of three dinghies competing. 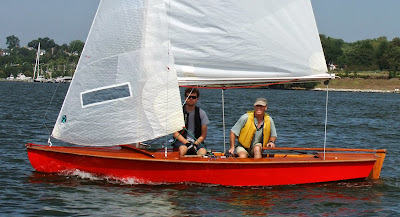 Skipper Tom surrounded by all that varnish on Honalee. 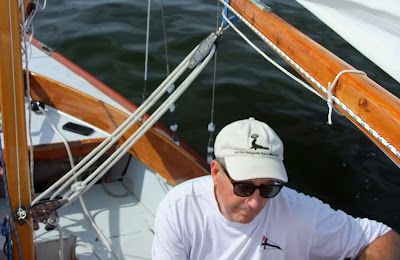 A photo of a L.Francis Herreshoff Rozinante. This one is not Honalee but one that Tom came across in Maine that has a shorter coach roof than Honalee. 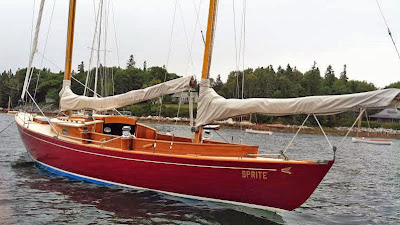 This photo of Honalee racing the 2014 NSHOF race was taken by Captain Ken of the schooner Woodwind which I have lifted from his blog post on the 2014 NSHOF race. I am relaxing next to the mast after successfully jibing the pole and sorting out the halyards. 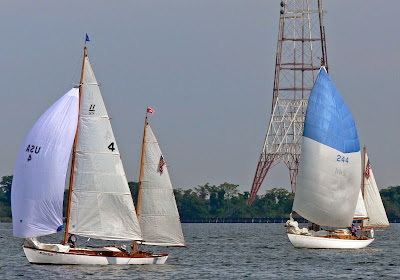 My report on the 2012 NSHOF Classic Wooden Sailboat Race can be found here.

Posted by Tweezerman at 4:38 PM

What were the other two dinghies? You should have gotten John Z. to race his Mistral.

Also in the dinghy class there was an all wood Windmill (see header photo) and an Ian Oughtred Acorn dinghy.

At the same time as this Classic Race, Zohn Z was chasing Jamey R. around the course at the E-City Nats (where there was plenty of wind).