The MXNext is the most swoopiest, curvaceous, and colorful of the current crop of performance singlehanders. With a narrow, wedge hull with very little waterplane up-front (very similar to where the International Canoe class is going) married to wide, arching wings, the MXNext is a stunning visual experience when viewed on land. A 4.35 meter, all carbon, hiking singlehander with main and assymetric, designed by ex-pat Russian Vlad Murnikov, the MX-Next is being built in Massachusetts by Mark LeBlanc.

I talked briefly with Mark at the show. He said stability was similar to the Laser but the speed was much faster, as to be expected with the power of the wings and spinnaker. Twelve had been sold into Russia and there was a fellow who showed up on the first day of the show to put a deposit down on a hull. As Toyota found out with the Prius, not only do you need to make technical advances but the customer also needs to make a visual statement, hence the Prius shape has remained more-or-less the same angular sides/curved hatchback shape for fourteen years. If you want to go fast without undue gymnastics and embarrassment (as the foiling Moth treats novice owners) and have the added bonus of the most stand-out dinghy on the lake, look at the MXNext. A tad expensive at 13K but sometimes statements cost a bit.

I hate to admit it but the MXNext looks more moth-like than the Classic Moth class. 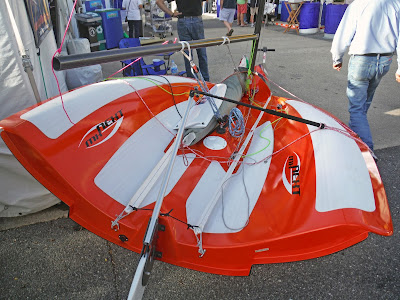 Posted by Tweezerman at 4:04 PM

Email ThisBlogThis!Share to TwitterShare to FacebookShare to Pinterest
Labels: Boat Show, Other sailing dinghies, Other singlehanders

Too flashy. I'll stick with my boring, slow Sunfish.

I'm not that flashy either but I do like some color in sailboats. All that white in the RS, Zim, and Topper line is visually unappealing.

Nothing boring about the Sunfish.

I dunno, it's kind of sparkly and red. Like a sports car...