"The Sailfish is a light yet incredibly robust little boat, able to punch along in heavy conditions that can force the retirement of other dinghies. It is quick to plane, and hugely exciting off the wind, especially in a good breeze.

"...the Australian Sailfish originated in Victoria. In the 1970's there were strong club fleets in Melbourne and country Victoria. In New South Wales, there were clubs fleets in Sydney, on Wentworth Falls Lake in the Blue Mountains, and on the Nepean River at the foot of the Blue Mountains. There were also boats racing in Queensland and also, as I understand, in Papua New Guinea.

From a newspaper article, a photo of Jack Carroll, one of the designers of the Australian Sailfish. 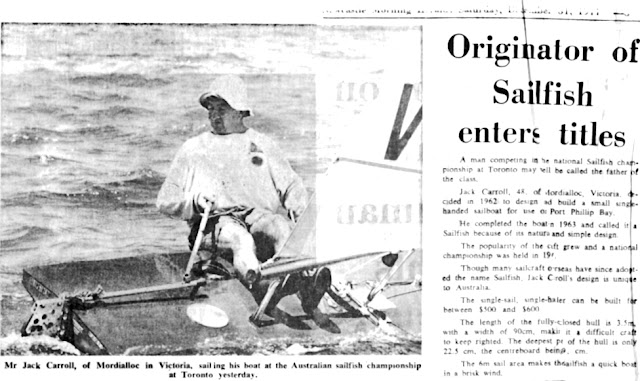 Chris built his championship winning Janus in 1970. The frame and stringer construction is well shown in the two following photos. 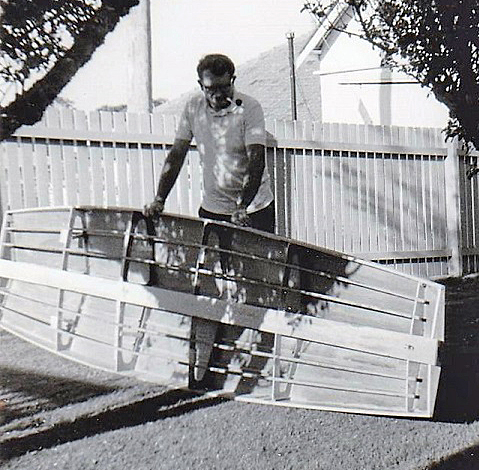 Chris in Janus in some breeze. 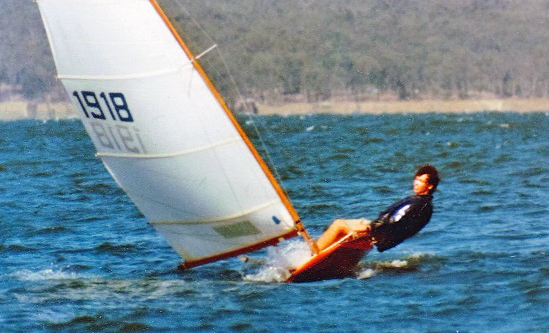 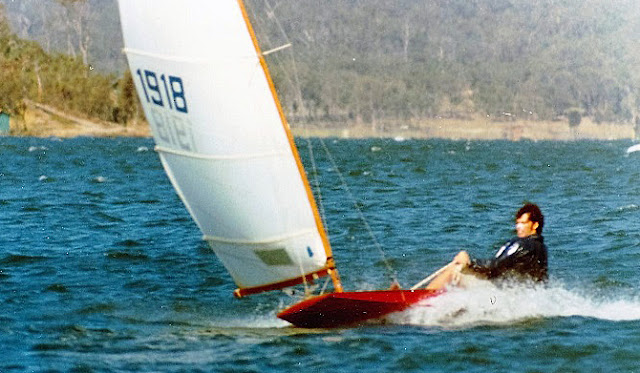 A photo of one of the starts at a Championship. 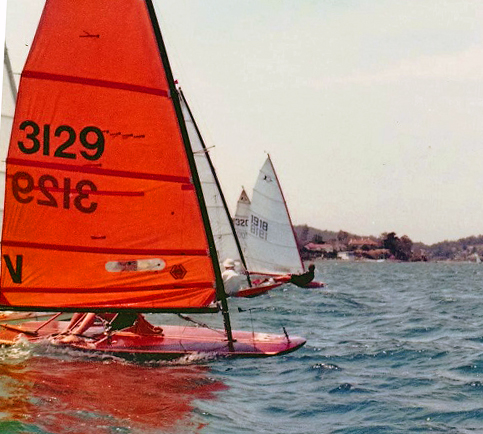 Chris and Janus featured in the newspaper. 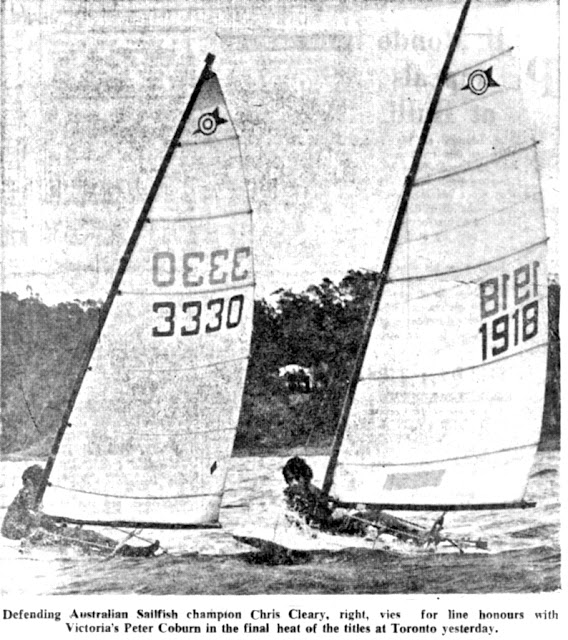 Two other racing photos from the newspaper. 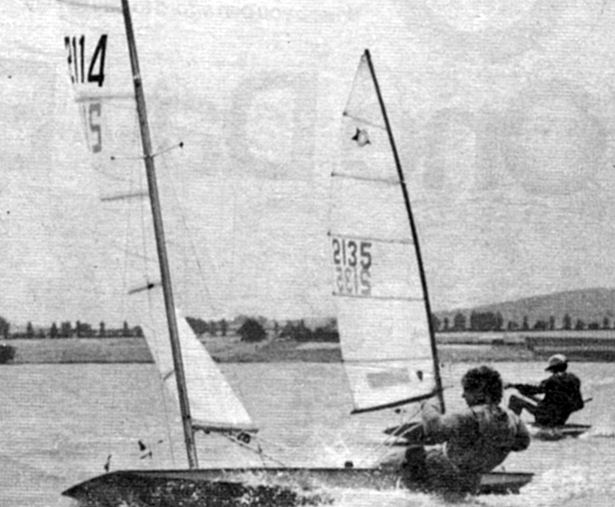 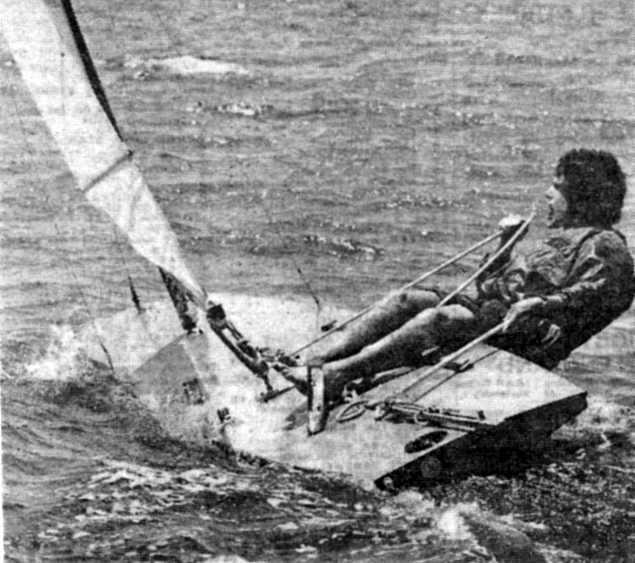 The Australian Sailfish made a good father/daughter sailboat for Chris. 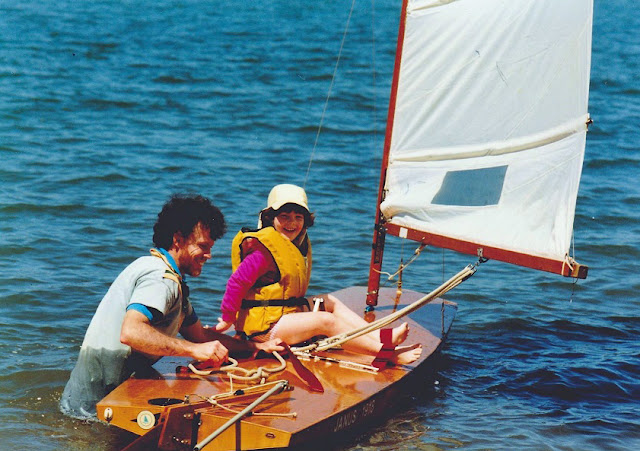 I'm guessing that Chris is around the same age as the blogmeister and this is a more recent photo. At our age, I also pile on as much protection from the sun as possible. Chris writes that Janus still gets wet at least once a summer. 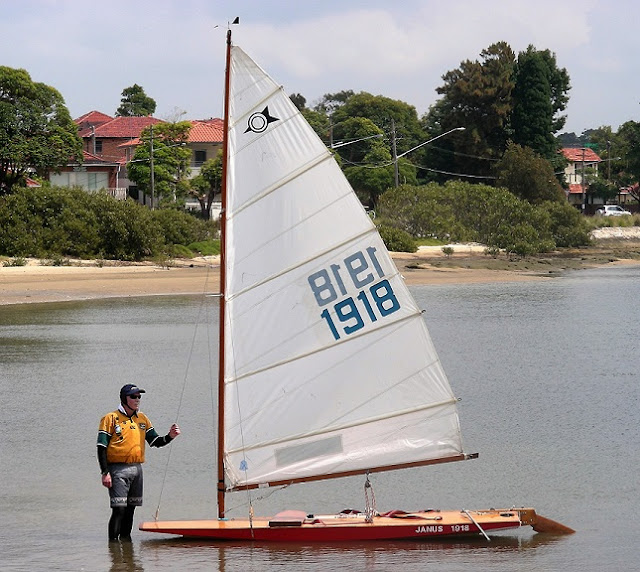 Posted by Tweezerman at 6:19 AM

That's a fairly low slung boom....gybing in a breeze would be fun!

Yeah Paul, agree with that one. But if you look at the previous post, Sailfish #2 had the boom a lot higher up. It may be that the racers moved the rig down to get the heeling moment down as the class matured. Heck we even have some old fart Classic Moth sailors who love their Olympic Europe and the boom is right down on the deck. I generally sail with the boom up for comfort.

Interesting, obviously not the Sailfish that preceded the Sunfish I like to sail.

A well sailed Australian Sailfish , as this is, can keep up with well sailed pre foiled Moths, Lazers etc. It was a design by Jack Carrol of Victoria, Australia and although there was a lot of them built, (over 800 plans sold), sailed and raced through late 60's 70's and 80's. There were not that many clubs that had large racing fleets. You commented on Gybing... yes it was a little hairy on occasion. most racing sailors, lay flat while tacking or gybing, in a controlled slide / 180 degree turn under the boom, but the lower rig definitely helped lighter skippers. Often, Sailfish would be the only boats left standing or finishing races, when strong conditions came in.

Thanks for the comment. Chris Clearly submitted a "How to Sail an Australian Sunfish Primer" and I made a post out of it. It mirrors your racing experience in the Sailfish.

Certainly the Sailfish is a simple, but quick craft, very representative of the Aussie ethos in dinghy sailing during the 1960's, 1970's.