Two different scows at the Inverloch Classic Wooden Dinghy Regatta: Rainbow and A-12


While I'm on a scow kick, mention must be made of two different scow designs that competed in the Australian ICWDR out of the South Gippsland Y.C. One of the kingpins of the Classic Wooden Dinghy event, Andrew Chapman and family, had two restored Rainbows in the regatta. (Correction: Andrew did the restoration of one "Annie", his son-in-law, Jonathan, a fine craftsman in his own right - music instruments - did the restoration of the other one, "Moonraker".) The Rainbow is an Australian 3.65 meter design that was popular as a junior trainer in South Australia in the 1960's. Andrew sailed one Rainbow with his grand-daughter and, his daughter Trilby, sailed the second one with Andrew's other grand-daughter. I asked Andrew what he thought of the Rainbow scow as a parent/kid sailing dinghy and he was enthusiastic.


"The Rainbow is lovely small boat to sail. It is very forgiving and a lot faster than a Mirror and Heron without using the trapeze and/or large spinnaker. I think it is an ideal boat for an adult and young kid or young teenagers. Trilby and I sailed with each of her two daughters and we plan to introduce them to using a trapeze on a beat and then the trapeze with spinnaker on reaches. We are also putting them on the helm and they enjoy sailing the quicker boat and they are not overwhelmed by the boats size. When they are comfortable using the trapeze and spinnaker trapeze combination the next stage will be the Gwen 12 then Cherub. I think the Rainbow is a very good small boat and it is one that is very easy for home builders to make.

Andrew Chapman and grand-daughter in "Annie". 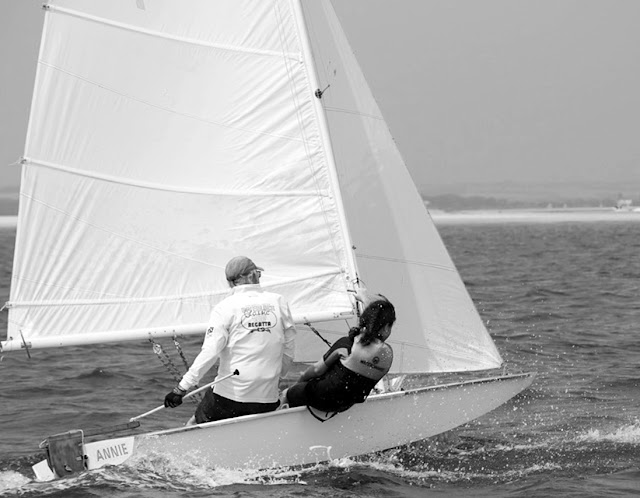 Trilby and daughter in "Moonraker" 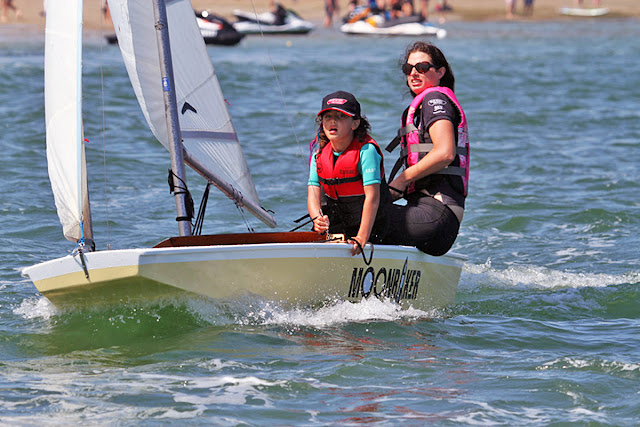 Three very different Australian scows in one shot. Trilby with the Rainbow on the beach, a modern carbon foiling Moth scow, and, in the background, a Classic wingless Moth scow. 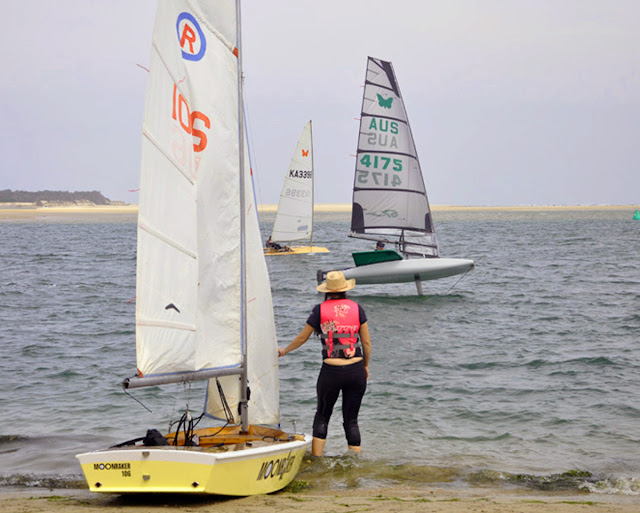 Plans for the Rainbow scow can be found here.

The A-12 scow was Frank Bethwaite's follow-on to his Northbridge Junior scow. Designed to be a higher performance dinghy, the A-12 was longer, 12 feet or 3.65 meters, sported Frank's signature rotating mast and had a trapeze. Neil Kennedy from Nedslocker dug out a November, 1970 issue of the Australian Modern Boating which featured the class when newly introduced. Some photos from that article: 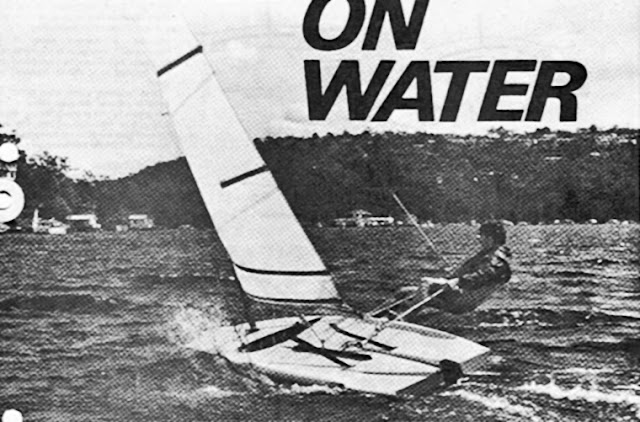 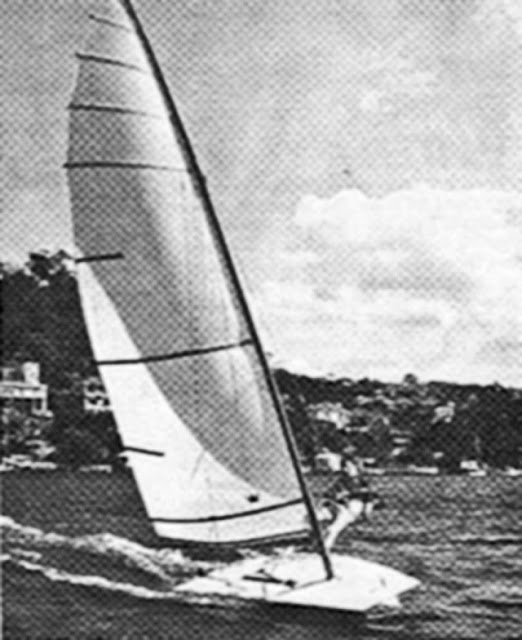 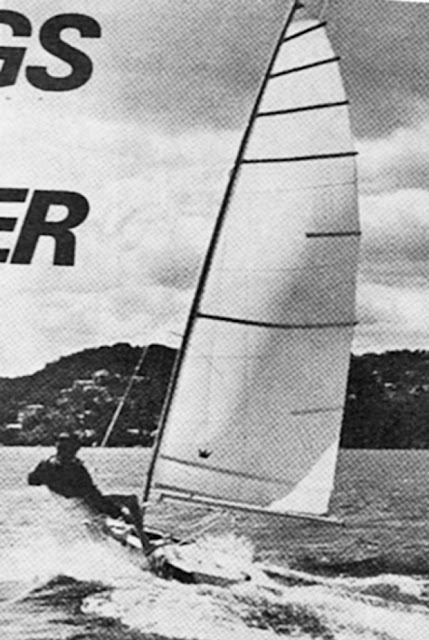 An A-12 scow has shown up at the Inverloch Classic Wooden Dinghy Regatta for the last two years but, as Andrew Chapman writes, in the beginning no-one knew what type of scow it was.


"At the first regatta Andrew Kean sailed the boat as a Moth, with two tone blue sails, because that what it was sold to him as. He did wonder why someone had put a trapeze fitting on the mast. Apparently he never thought to measure the length. He sailed it again in the most recent regatta as an A12 with blue and white sails with a different rig.

From the photos it looks like Andrew was able to find a genuine Bethwaite rotating rig and A-12 sail.

The A-12 with the original Moth rig; a blue sail, wooden spars. 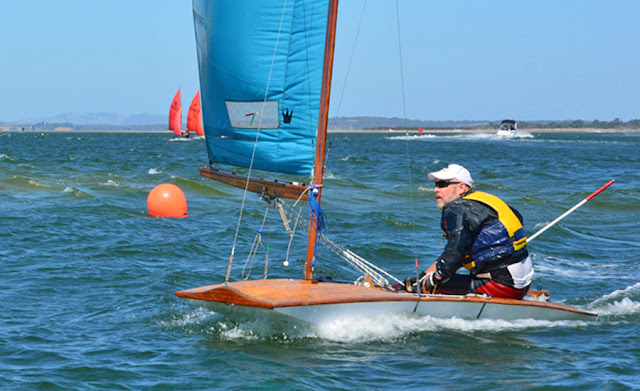 The A-12 on the Inverloch beach next to an Australian Sailfish. 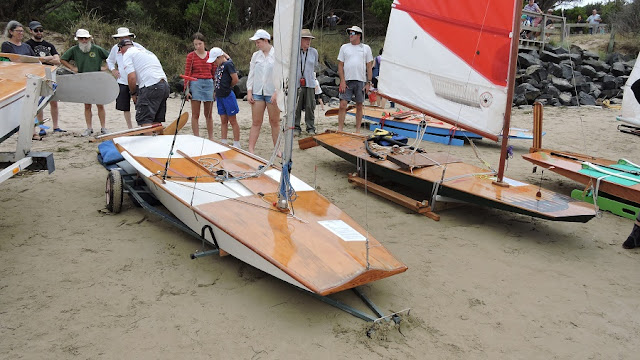 For the 2018 regatta, Andrew was able to plug in the correct rig; aluminum rotating mast with a very big sail. 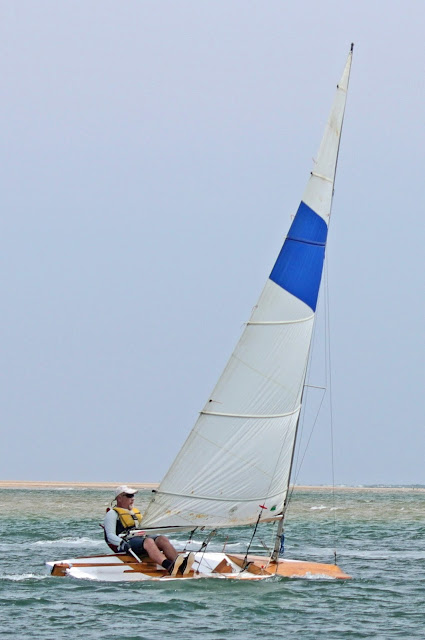 I'm not sure any plans exist for the A-12. None have come forward yet.

George McGee adds more info on the A12. (From a comment I dragged to the main body.)


"I raced an A12 at Northbridge sailing club in the mid seventies. My boat came from Starbord Products with 2 rigs. The first rig was the 85 sq foot two tone blue sail with the over-rotating wooden mast. The second rig was a 65 sq foot two tone sail with a shorter wooden mast. (Not sure of the 65sq foot size). When the smaller rig was used the boat was classed a J12 rather than A12. NSC had a number of A12s and J12s competing on Sundays in the mid seventies.I spent many a happy afternoon on the A12 redefining the term "screaming reach"

The A-12 was recognised instantly by Greg Barwick, one of the Australian Sailfish fraternity, when the boat rolled up at the inaugural Classic Dinghy Classes Invitation Regatta at Cairn Curran in Nov last year. His brother had owned one back in the 1970's.

It's interesting the variations that come about simply by building to a set of dimensional rules.

One question - Is a foiling moth a boat or is it a form of aeroplane?

Re, the foiling scow Moth. You sound like me. I've always enjoyed the bashing bit through waves or surfing down waves in sailing, hence a regular in-water dinghy will always have appeal to me over these new-fangled contraptions.

Some further info regarding the A12. I bought the boat on ebay from someone in Canberra about 2007, from the photos I'd assumed it was a Moth, once I got hold of it and measured it, figured someone had been mucking around with Moth plans. I also noted it had trap wires and promptly removed them from the original wooden mast. There were no markings or information on the boat other than a name and what I assumed to be an old (Sydney?) telephone number in texta on the rudder box. The rudder blade did have the "Starboard Products Sydney" logo still on it (which eventually helped in identification). The two tone blue sail was the original (Elvstrom, with Tasker cane battens) and only had the number 14 and the sailmakers logo. In the absence of any other info, I restored the boat best I could. I sailed it at the first Inverloch Classic Wooden Dinghy Regatta, and yes registered it as a Moth (I knew it technically wasn't a Moth, but didn't know what it was) There was some vague recognition but no distinct identification at that time. Chris Cleary's account above is correct, Greg Barwick recognized it at the Cairn Curran Classic Dinghy Regatta 2017 informing me that it was an A12 (his brother had owned one), this was subsequently confirmed by Nicky Bethwaite, who told me that her father (Frank), built them for her when she grew out of Flying Ants. I then set about trying to make a rig that would stand up to the trapezing the boat was designed to do, after some investigation into the class (there's not much info available) and some assumptions, I put what I think is an NS14 alloy mast (added the diamond as per the wooden mast) and attached trap wires. In the interim (and for the 2017 ICWDR) I used a boom from my 420 and an old Gwen 12 sail (the white with blue strip) as the original blue sail's bolt rope had disintegrated (now repaired). I'm interested in hearing from other people with A12 knowledge and information. Nicky Bethwaite suggested that there were no plans or documentation available. I have seen one other boat for sale online years ago, and another today in NZ, it would appear that there are only a few - of the estimate 50 something ever made - still in existence.

I also had a Rainbow (3085) at the time I bought the A12, it was a fun boat and great to sail with the kids. I sold that when I moved around 2011 and I wish I'd hung onto it now. It also has an interesting heritage. There must be a lot more of these around in sheds, yet to surface.

Could you please ask Neil Kennedy to send me a copy of the 1970 issue of the Australian Modern Boating which featured the class when newly introduced?
I have a soft copy of a Modern Boating November 1969 article on the boat.

Hi Andrew I owned a Northbridge A12 scow (#16 Moonbird). It was built by a family friend in Tasmania in 1970 where i sailed it as a lightweight teenager. After learning on a Mirror this planing scow was incredibly exciting and fast in the protected estuaries south of Hobart .....with the over-rotating timber pear rig and trapeze. I sailed a Cherub through the 1970's and eventually bought the A12 in the 80's and brought it to Melbourne. If you want a few fotos email me at charlie@nxstarchitects.com

Hi Andrew,I raced an A12 at Northbridge sailing club in the mid seventies. My boat came from Starbord Products with 2 rigs. The first rig was the 85 sq foot two tone blue sail with the over-rotating wooden mast. The second rig was a 65 sq foot two tone sail with a shorter wooden mast. (Not sure of the 65sq foot size). When the smaller rig was used the boat was classed a J12 rather than A12. NSC had a number of A12s and J12s competing on Sundays in the mid seventies.I spent many a happy afternoon on the A12 redefining the term "screaming reach".

Hi, i had a Rainbow (sail number V43) in about 1967. I think it more accurate to call them an intermediate class than a junior one. They were a national class, popular in Victoria, Tasmania and WA as well as SA. I sailed from Mordialloc Sailing Club, and there was also a fleet at Frankston. Despite their simple flat bottomed hull form they were wonderfully fast reaching in a fresh wind with their flat cut spinnakers set from an 11 foot pole, and crew out on trapeze.

Raced it at NSC during the mid 1970s - took a season to learn how to sail it - hard chines, flat bottom, unstable when tacking, one hand on the tiller, when out on the trap, you used your teeth and spare hand to pull in the main. Always best sailing at 15 deg angle.

Loved the comment re a "screaming reach".
Brings back a challenging memory - sailing on a broach reach on the trapeze in Sailors Bay - really moving - down the back of the boat - trying to get every ounce of speed out of the boat...then disaster! I buried the nose. The boom, vang and mast had a fight - when I came up for air from under the mainsail - the (wooden) mast had lost that battle - snapped at the gooseneck.

Frank replaced the mast with one made from aluminium at his Naremburn boat building shed (some of you will remember). Still rotating - similar mechanism to the Tasers.

I sold the boat to a young family around 1978 that continued to race at NSC.

I hadn't checked this discussion since posting 2 years ago, and coincidently I was just doing some maintenance on the A12, since selling the 420 I had to make up a new boom to go with the aluminium mast (I think is from an NS14). Thanks for posting your stories about the class, which I've read with interest.