Stuart Walker and Sinjin; Together Again

Ahh! a human interest story for Earwigoagin, a coming together of an old sailing team after a long hiatus.

Dr. Stuart Walker should be familiar to many in the sailboat racing community. Stuart has been a longtime racing tactics columnist for the U.S magazine "Sailing World" and, must be the most prolific author of how-to books on sailboat racing in the short recorded history of this sport. Here's a list of Stuart Walker's titles that I could compile off the Internet (there's probably some I missed);
Dr. Walker started his racing career in International 14's in the 1950's and, in the early 1970's, switched over to the Soling class. (I haven't seen it but I've heard his trophy room is very impressive.) Early on in his International 14 career (1957), Stuart Walker teamed up with a St. John Martin (Sinjin to everyone), and they remained a team until 1963 when Sinjin bought his first International 14. Sinjin would still be called on to occasionally fill in as crew in big regattas, crewing with Stuart in the 1967 English championship.

A picture of Dr. Stuart Walker and Sinjin taken in 1962. This appeared in "Sailing World's" article celebrating Stuart Walker's 300th column for the magazine. This is US666, Salute, the International 14 in which Stuart Walker won the Prince of Wales Cup in 1964 (not with Sinjin as crew). I think all photos in this post were taken by Ellie Martin. 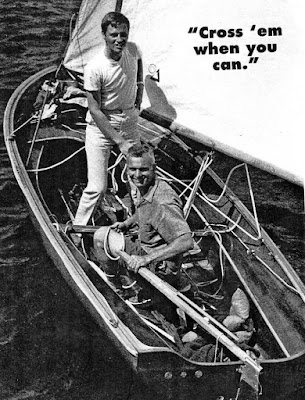 Another pic of Stuart and Sinjin in the International 14, Salute. 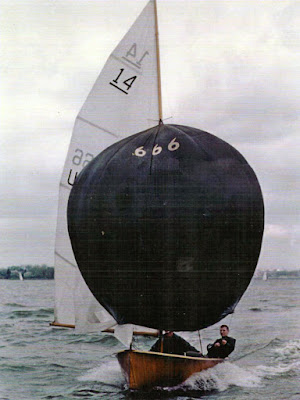 US 800 was Stuart Walker's next International 14. This looks to be Stuart and Sinjin. Stuart had devised a really skinny mast out of 1 1/2" tubing for this 14. 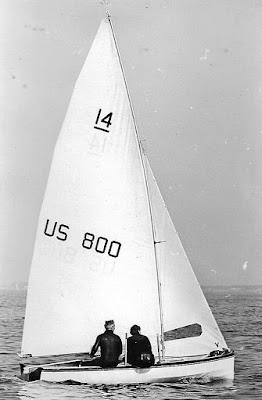 Fast forward to Jan 1, 2012. There's a long distance sailboat race on New Years day that Severn Sailing Association have hosted since 1954 (this race being Stuart's idea as well). It's a 14 mile race up the Severn River, into Round Bay, around St. Helena's island and back again. International 14's and then the Solings and then J22's have participated but with the demise of the International 14's at SSA, it remains today, primarily a Soling event.

This year, Stuart recruited his old 14 crew, Sinjin and Sinjin's son (named Stuart, after Stuart). Sinjin hadn't crewed for Stuart since the 1980's but the chemistry was still there. In a breezy southerly and moderate temperatures for January, Stuart claimed his 32nd win in the Ice Bowl. All of us look at the good Dr., in his mid eighties, still racing hard in his Soling year round, and shake our heads in amazement and admiration.

Jan 1, 2012; Stuart, Sinjin, and Stuart Martin bombing up the Severn River in Stuart's Soling with a strong following breeze. 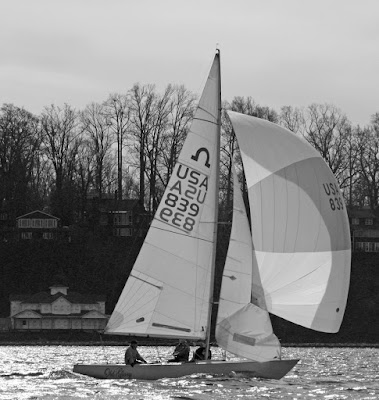 Stuart Martin, Sinjin, and the good Dr. Walker with the Ice Bowl. 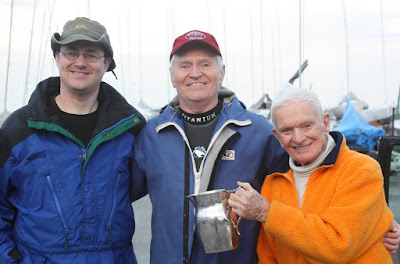 And Sinjin, back in 1965, was to take a wet-behind-the-ears teenager, who was mad about sailing, but had never raced, Sinjin took a chance on this teenager and made him his International 14 frostbite crew (Sinjin's wife finally putting her foot down about racing wet boats that capsize in the winter). And that merits a very grateful TOH from the blogmeister.
Posted by Tweezerman at 10:31 AM