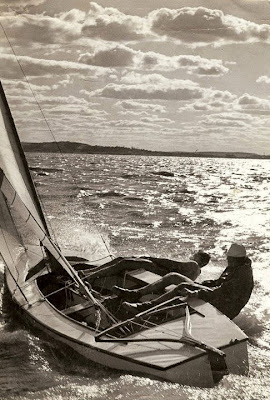 Posted by Tweezerman at 8:22 AM

Great wishbone tiller! Are there no hiking straps or do I not see their anklets?

Thanks for the link. I had already featured this YouTube back in a previous post about the Bosham Classic Dinghy regatta. I've got some more pics of 12 sq. meter sharpies, enough for another post one day. Great Classic boats.

Baydog - Certainly not an orthodox hiking position by today's standards - looks painful. I agree, I can't see their hiking straps either.

Great photo.....! I think David Henshall should produce a book of Classic dinghy photos, maybe all B&W, like, Eileen Ramsey, but more up to date and comprehensive.
Sadly, the book Classic Classes, missed out on the opportunity to represent all the old photos from the various classics, and missed a few of the important marques as well.........
Mike

How to "take care of business" on a small boat with no head.

I think it was last year that I meet this great picture at the Veleiros do Sul web site. The helsman in the picture is Nelson Piccolo, and thois picture is from the 70´s. We had discussed this pictures in our group in the Facebook - Velejadores de Classicos - It is a great picture. Perfect light, enough action, it like a poem. The contact of Nelson Piccolo in his sail loft Piccolo Sails: contato@piccolosails.com.br .. Fair winds !