It seems I've settled into a two year rotation in making it over to St. Michaels, Maryland for the Mid-Atlantic Small Boat Festival (MASCF hosted by the Chesapeake Maritime Museum, on their grounds). This year saw me once again go for a Saturday to wander around a crowd I normally don't hang out with, the ones with mostly home-built boats, kayaks, canoes, pulling boats, traditional reproductions, CLC kit boats, Bolger boxes, restored dinghies, and other oddball designs. Strange as strange as it could be, as soon as I arrived at the Festival, I ran into two ex-bosses. Walking across the parking lot to get a ticket I ran into an old engineering manager. He and I were the only two sailors at this former company, but he had a J-27 racing keelboat, so it was somewhat of a surprise to see him going into a show featuring this polyglot mix of mostly wooden boats. It turns out he was making a day-trip of it with his wife and another couple. For him, the feature event was to be later on, dining out in the delightful waterside town of St. Michaels. We caught up on some long-ago names - you know, what is so-and-so doing now? Is he retired? Where is he living? We split up after getting into the show.

I ran into an old sailmaking boss once inside the show. Again, an odd meeting since he is a racing Star and Log Canoe sailor and not known to take much interest in these small boats. And again I was updated on old co-workers.

Then it was my turn to wander the docks. I did wander into someone from the Kirby Paint Co,, New Bedford MA.. I have used their marine enamels and have found them easy to use and even I am able to get a reasonable finish with them, despite my impatience with painting boats.

Some boats at the docks, at least the ones I took photos of:

Pete Lesher, the chief curator at the Chesapeake Maritime Museum has collected the only two known C. Lowndes Johnson Eighteen-Footers, a design precursor, by ten years (1922), of his most famous dinghy, the Comet (1932). I had a very interesting conversation with Pete on where American dinghy design originated in the early years of the twentieth century. 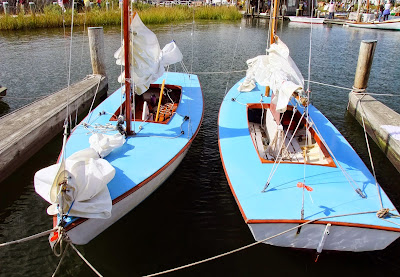 The cat-ketch Graham Byrne's design Core Sound 17. The larger Core Sound 20 is the go-to design for those looking to do the Everglades Challenge. Two mainsails with wishbone booms make for simple day sailing on this easy-to-build shallow V-shaped hull. 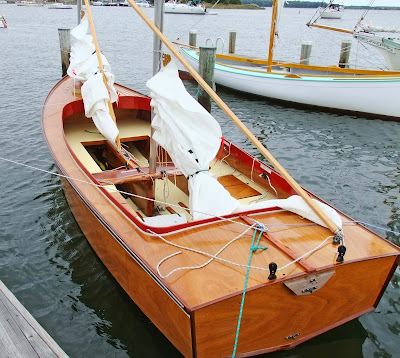 This Force 5 had a purple hull and this puke-lime-yellow deck. Bravo to the old production builders from the 1980's! How I wish more fiberglass dinghies built today would add a splash of adventurous color. White on white on white gets boring, boring. (You also got to love the wood touches in this Force 5 - the centerboard cap and the front cockpit coaming. Does anyone know if this was original on the production boats?) 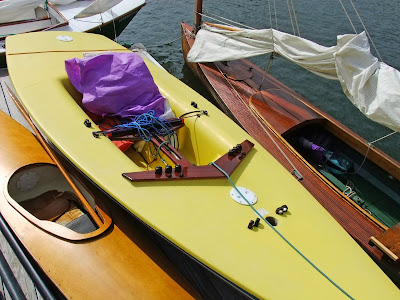 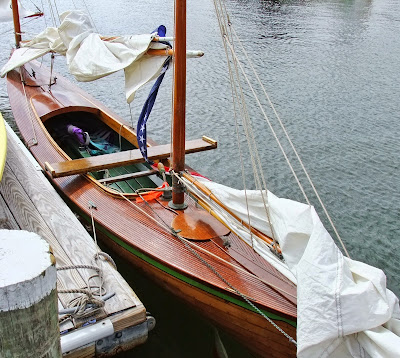 There is this Classic Moth, a Shelley design, that only shows up for MASCF, but has never attended any of our Classic Moth events, This Shelley sports mini-wings that are illegal under the Classic Moth rules. This could be easily fixed to comply with our rules but so far the owner has shown no inclination to race with us. 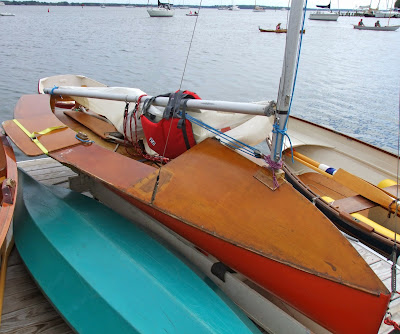 Posted by Tweezerman at 5:08 PM

No inclination to race with you, for surely he would get his ass kicked. Lovely boats, Rod, especially the Comet cousins. Just lovely.

I don't know about that. After watching the Classic Moth sailor start the MASCF sailboat race, he looked as if he had raced dinghies at some point. Some sailors burn out from competition, particularly those who had a heavy dose of junior racing and coaching. Looks like this guy enjoys the occasional fun race every now and again.

Rod, You might enjoy a visit to the Gibson Island Historical Society (yes, there is such a thing - all in a little cottage next to the boatyard)
GIYS had several unique classes of small wood boats in their Junior programs years ago. First, in 1924 there were the leg of mutton (like Log canoe) cat rigged, hard chined skiffs called "Kids Boats". Then there were Barnegat Sneakboxes with their scow like bows. And then in 1934, there were the LJs, (stands for Lowndes Johnson), sometimes known as U scows. They were pram bowed boats with chines. I have pictures and a movie showing all these boats when you have a chance.
Junior Sailing at GI was going strong in 1924 and I'm sure was the earliest program around. Back before the days of the ubiquitous 420 and Optimist, Juniors began their sailing days in real boats with copious amounts of sail and seldom single handed! I simply don't understand the modern Opti movement, setting kids out alone in non rescue-able over priced boxes.