After watching the start to the sailboat race for the Mid-Atlantic Small Craft Festival sailboat race I had the option of being dropped off with the race committee at the corner of the Chesapeake Maritime Museum harbor to watch the finish or, stay with the CBMM workboat, Volunteer, and motor through the fleet as it beat toward the finish. I chose the latter but as soon as we poked our nose out of the harbor there was, dead ahead, a sail with no hull, a sight that brokered further investigation.

It turned out it was one of the racers that needed assistance and it was also someone I knew. Larry Haff, a canoe sailor, was racing his homebuilt Polynesian outrigger canoe and as we drew near, we could see his main hull awash, Larry sitting forlornly in what was now a bathtub with the outrigger bobbing alongside, completely detached. The outrigger attachment point had failed when Larry had hardened up to go upwind and he was now discovering that he didn't have enough buoyancy in the main hull to support his weight and the sloshing water. I wondered how difficult this rescue would be as we would have to maneuver this longish workboat alongside but Lad Mills did a great job. Thankfully, the aft freeboard on Volunteer is low, the aft deck wide so we were able to work efficiently to get the rig out of the canoe and onto Volunteer, the outrigger stowed onboard and then, with some tugging and grunting, roll Larry up onto Volunteer's deck.

On our initial approach, the crew on Volunteer viewing the half sunken canoe. From left to right, Tweezerman, Rick Scofield, Lad Mills with Larry Haff in the water. Photo lifted from the CBMM Facebook page. 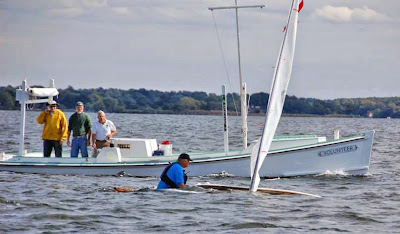 Rig and outrigger secured on Volunteer, Rick watches closely that the canoe main hull, still with very little freeboard, doesn't veer off or dive under the water as we slowly tow her in. 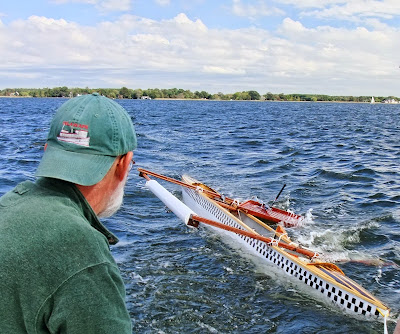 Lad Mills at the helm. Larry Haff  adding another pair of eyes astern. Other than the outrigger attachment failure there didn't seem to be any other major damage. 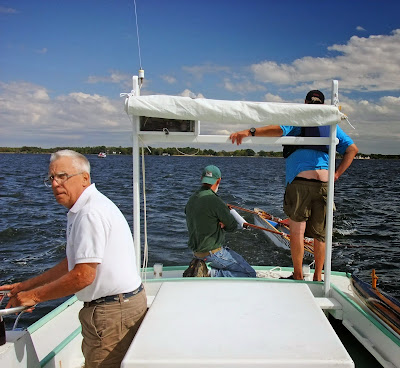 Larry Haff's outrigger canoe, back on shore, loaded up for the journey back to Massachusetts and some engineering modifications over the winter. 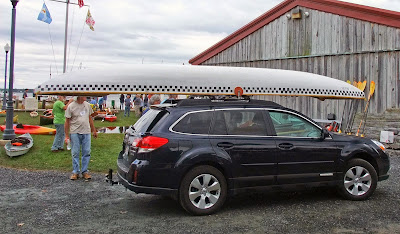